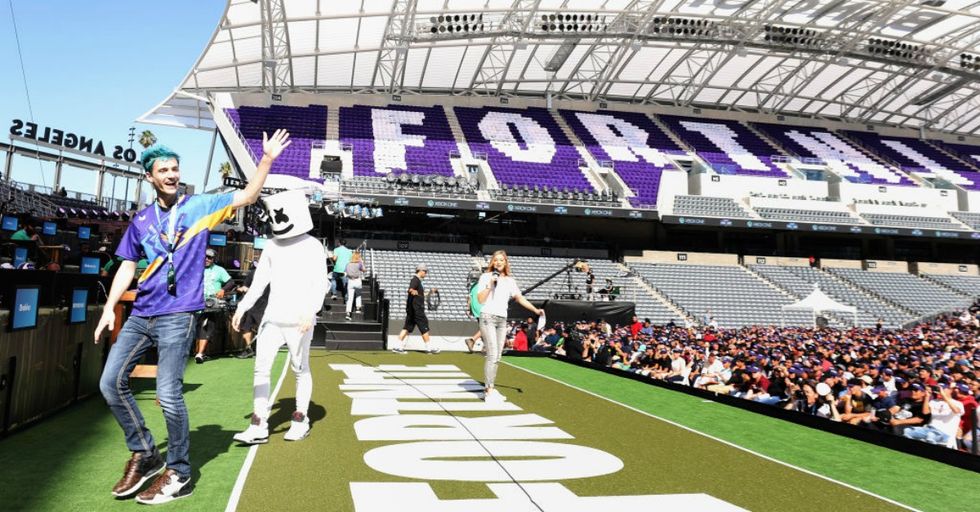 11 Tips to Help You Finish 1st in Fortnite Every Time

John Costa
during the Epic Games Fortnite E3 Tournament at the Banc of California Stadium on June 12, 2018 in Los Angeles, California.

Fortnite is probably the most popular video game in the world right now. It’s addicting, it’s hard to win, and best of all, it’s free.

So whether you’re a casual gamer late to the party, or you’re tired of your little cousin chatting shit and you need to make sure you win on your first try, we’ve rounded up these Fortnite tips to help you win, and win often.

Gain every competitive edge you can.

Fortnite is a game with 100 players and only one can win. It’s important to gain every single competitive edge that you can. And that’s where we come in.

So if these tips aren’t working the first and second time you use them, don’t give up. Even the pros don’t win every single time.

Fortnite is a game of averages.

You just can’t win every time you queue up. Our tips will help you combat fatigue by losing the right way.

Stick together — or not.

These tips will help you whether you’re playing as a team, or queuing up to a solo server. No player left behind!

Queue up and get ready.

Hit the next page to read our first tip, and maybe start queueing a game in the meantime.

“But I lose whenever I try to shoot someone else!" Toughen up, buttercup. There’s a method to our madness.

This means you can get good loot when it counts.

Getting good armor and weapons means you’re more likely to survive in the late-game rather than scavenging empty houses when there are only 14 people left.

Get familiar with the map.

Get familiar with yourself.

Run into other players. That’s the point. Know how other players tend to play, and what your strengths are as a player. Do you prefer to build and snipe? Do you like a shotgun or a rocket launcher? Playing aggressively is going to help you learn fast.

And hey, if you die, at least you die quickly and didn’t waste a bunch of time in a game you were never going to win. Queue back up and get back at it. Hit our next page for tip #2.

You’re not going to get anywhere until you get comfortable building.

If you’re already being shot at, building is basically free shield. Your enemy already knows where you are, so—

Building defensively is your friend.

If someone is firing at you, and you can duck behind a wall, someone might spot the firing heading your direction and kill whoever is after you. Two birds with one stone.

It will become second nature.

The more you practice building forts for cover, the faster you’ll become. Now you can wait for the other player to make a mistake and capitalize.

Don’t forget, someone can shoot the base of your fort and send the whole thing crumbling, so try to stay a little grounded. The next page has some tips for doing just that!

#3. At the beginning of a match, start high.

The best Fortnite players tend to drop high in trees and atop buildings to start a match.

This saves so much time.

Falling in a tree or on a building saves time and gets you to valuable chests that are normally hidden in the higher floors of buildings.

Use your axe to break in.

This gives you building materials that you can use later, is nearly as fast as going through the door, and looks pretty badass too.

You’re less likely to run into enemies this way.

And even if you do, you’ll be better prepared. Let the inexperienced players run from building to building, while you collect better weapons, more shield potions, and start off your game strong.

Does this really matter? Only if you can keep an eye out for potential danger. It’s a lot safer looking out behind the cover of a house than running around on the ground. Hit the next page for our glider tips!

If you fly over the sea before landing, you’ll get to ground much faster.

You don’t need to worry about deploying your glider if you just want to coast it in. They’re deploy automatically and you’ll want to wait until the last minute so you can reach ground (and therefore loot) faster.

But only over land.

If you coast along the water, your glider deploys later, and you can get a jump on everyone else in the game.

#5. Don’t fly beyond the main island.

This tip is for the real first timers. If you try to fly to the other islands, you’ll just die. They’re not real, they’re there only for your pain. I’m sorry you had to go through this.

Covering ground while the glider isn’t deployed is inefficient. Try to get as close to ground as fast as possible, and make up the distance to get to your destination when your glider is already deployed. Hit the next page for the last few tips you’ll need to win!

#7. You can avoid big cities if you want.

Sure, there’s more concentrated loot in a city compared to the outskirts, but you can find plenty of great loot, building materials, weapons, etc, in less busy parts of the map. Ease yourself into the game by staying out of harm's way for the first few minutes of the game before going all out agro.

If you have time, pop into the item menu and rearrange things logically. Like keeping shield potions and bandages together or short ranged weapons next to your sniper just in case you get caught out.

SMGs and pistols are outclassed by other weapons in the game. Don’t waste your time with these.

People might hate me for telling you this, but bushes provide excellent cover. If you’re feeling overwhelmed, run to a bush and crouch. It may feel like cheating, and it definitely won’t help you get better, but it may save your skin every now and then.

This might sound obvious, or silly, but the truth is, the more you play, the better you’ll become. So get a few practice solo-runs in before joining up with your friends and you’ll start to look like a pro before no-time.