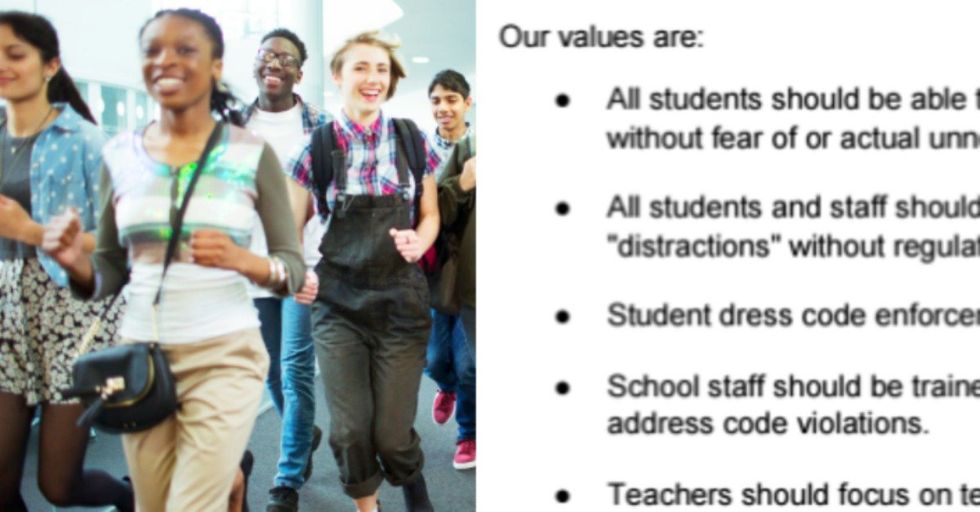 High School Administrators: 'Stop Looking at Girls as Objects and We Won't Need a Dress Code'

There's no shortage of disturbing school dress code stories. They continue to pop up all over the Internet, even in 2017.

You know how it goes. Girls are sent home for too-short shorts or thin-strapped tank tops. They're chided for creating a "distraction" in the classroom. Feminists and sane people decry the double standard and plead with school officials to stop sexualizing young girls.

Now, one school is stepping up and effecting change in a big way.

The "awful dress code" story is almost its own genre of Internet articles these days.

There was this story, in which more than 20 girls were sent home for wearing modest, off-the-shoulder blouses. Only when boys wore blouses in that style to protest the absurd rule did the story get the attention it deserved.

Then, there was this gem of a senior quote.

"I'm sorry, did my shoulders distract you from reading this quote?" is perhaps the best use of a yearbook quote ever. Ms. DiPaolo will be able to look back and know she was on the right side of history even in high school.

Of course, dress code horror stories aren't complete without talking about the "shorts longer than your fingertips" rule.

One mom posted this powerful Instagram photo of her tall, lanky daughter who was sent home twice in a row for wearing shorts that apparently violated the school's dress code. In a letter to the principal of the school, she also included this sarcastic note: "I forgot to thank you for making it clear to my daughter that her body is somehow a distraction, either to herself or to the boys. I thought she might have missed the message earlier in the year when the gym teacher told her she couldn't wear yoga pants because the boys aren't able to control themselves. I appreciate how hard you are working to drive the point home."

No matter how many stories like these come to light, schools always seem to end up on the wrong side.

Administrators and principals haven't seemed to make any progress toward fixing the obvious issues with many school dress codes.

The school's communication director, Evangeline Semark, along with other administrators, worked hard to put together a comprehensive dress code document that addresses modern concerns.

In her post on Facebook, she wrote, "This summer, a team of committed adults worked on revising our school's dress code. This effort was informed by the well-voiced concerns of our students and was in alignment with our equity goals and purpose. As we reworked the dress code, we also reflected on the stories of ETHS graduates who have walked our halls previously and experienced micro-aggressions (or worse) on a daily basis because of their personal style." Basically, they listened. They listened to their students. They listened to these stories. They know that school has to be a safe space for children of all sexualities, genders, sizes, races, religions, and abilities, and they worked to make the dress code reflect that awareness.

The three-page document begins with the dress code philosophy and values of Evanston Township High School. It reads, "Evanston Township High School's student dress code supports equitable educational access and is written in a manner that does not reinforce stereotypes." Hallelujah. Someone gets it. The values they enumerate are strong and admirable.

Again, the sentiment is finally. Someone understands exactly how important school is and exactly how much the treatment of students based on what they're wearing can impact these kids' school experiences. Can we also just take a moment to praise the phrase "self-identified gender"?

A school dress code does serve a purpose, and the document does a great job of explaining what that is.

It should be a form of protection for all students. It's a set of regulations to help make sure that school runs smoothly and that no student is made to feel unsafe. A dress code should not serve as a way to embarrass or shame students in front of their peers.

The document then gets into specifics.

"Student dress choices should respect the District's intent to sustain a community that is inclusive of a diverse range of identities," it reads. YUP. This is the first time a school dress code has made us want to stand up and applaud. Basically, students must wear clothes that cover "genitals, buttocks, breasts, and nipples" fully with opaque fabric. "However," it reads — and this is the best — "cleavage should not have coverage requirements." YAS. Young girls' bodies are not to be ogled. They are not to be sexualized. They are not for anyone except the person they belong to.

Students must wear a shirt, "pants/jeans or the equivalent," and shoes.

Then, included is a long list of things they may wear on top of that. Let's hear it for religious headwear, yoga pants, "tank tops, including spaghetti straps; halter tops," "visible straps on undergarments," and pajamas. ...Just really excited at the prospect of wearing PJs to high school.

No ridiculous rules calling for "shorts below the fingertips" or "covered shoulders." This isn't Puritan New England. This is the socially progressive United States laboring for equality in 2017.

They explicitly forbid discrimination with the words, "No student should be affected by dress code enforcement because of racial identity, sex assigned at birth, gender identity or expression, sexual orientation, ethnicity, cultural or religious identity, household income, body size/type, or body maturity. "School staff shall not enforce the school's dress code more strictly against transgender and gender nonconforming students than other students." Then it lists the ways in which it is inappropriate for staff members to force students to display their body. These include bending over "to check attire fit," measuring straps or skirt length, calling out students in front of others "about perceived dress code violations," and "accusing students of 'distracting' other students with their clothing." Evanston Township High School just made a major statement with their dress code in the best way possible. Let's hope other schools follow suit soon.