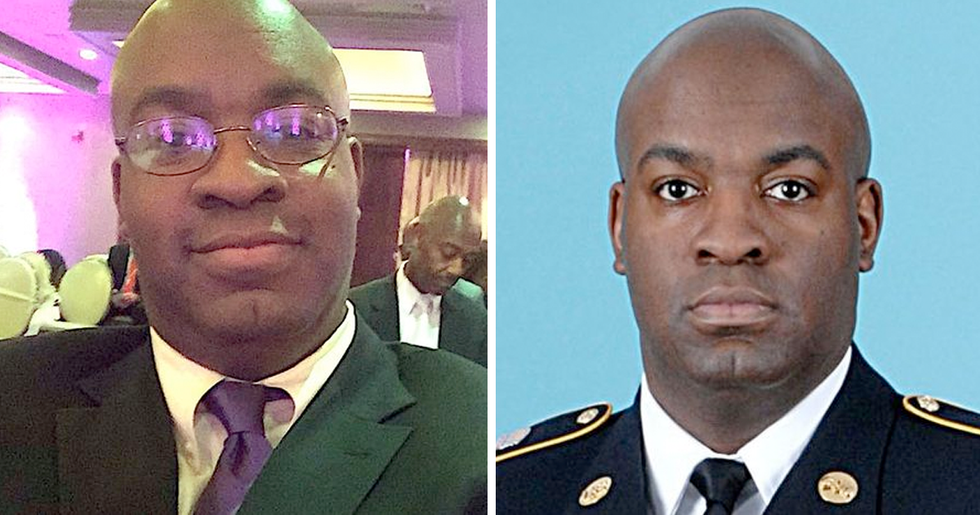 You do not come across many truly selfless acts in today's society but this story puts faith back in humanity.

If this does not bring tears to your eyes, then I don't know what will.

A school principal from New Jersey has tragically died after donating his bone marrow to a 14-year-old boy in France.

Dr. Derrick Nelson had never met this sick teenager but immediately agreed to be a donor for him.

Sadly, he never recovered from the procedure but his legacy will definitely live on.

Members of the community, former workmates and his students have been touched by what a great man he was.

Leading many to pay their tribute to him on social media and actively spreading the story of how much of a great man he was.

Find out more about what Nelson achieved in his life at the bottom of the page.

Statistically, more than 130,000 Americans will be diagnosed with a serious blood disease this year.

With 44,000 being diagnosed with leukemia including 3,500 children. In fact, leukemia is the most common childhood cancer.

Tragically, only 30% of patients who need a bone marrow transplant have matching donors in their families.

That leaves a whopping 70% who have to rely on the generosity of a compatible stranger.

7,500 Americans are actively looking for a donor match on the national registry at any given time.

But sadly, only 2% of the U.S population is currently on the national registry list. And even worse, out of that 2%, many can't be found or they decide not to donate once their bone marrow is needed.

Caucasian patients are statistically the most likely to find a donor.

With a match being found 75% of the time. Multi-racial people face the worst odds when it comes to finding a donor. If an African-American patient finds a match on the national registry, there is an 80% chance that this donor will be their only match.

And most tragically, at least 3,000 people die each year because they can't find a matching donor.

Can you imagine if that was you or one of your parents or worse still, your child? But we can all help reduce these shocking statistics, so why aren't we?

Perhaps people are unaware that donating bone marrow is a fairly straightforward procedure.

According to the National Marrow Donor Program, only 2.4% of donors experience serious complications; most of which are caused by the anesthesia or the donors' bones becoming damaged.

And only a minuscule amount suffer a fatality from donating.

In fact, a study carried out on 51,000 stem cell transplants found that only five donors died from the procedure. A very small amount when you think of all the lives that are saved from bone marrow being donated.

A bone marrow donation only requires less than five percent of an individual's marrow cells.

70% of procedures use peripheral blood stem cell apheresis, while 30% use the more well-known way of putting a needle into the donor's hip. This dude is even eating a pizza while he donates. Legend!

And thankfully there are still people who are willing to donate their bone marrow to help save a life.

Nelson had first donated blood back in 1996.

At the time he was an undergraduate at Delaware State University and volunteered to give blood at a drive organized by his fraternity. He also volunteered to have his bone marrow screened by the nonprofit organization, Be the Match.

Over twenty years later, he was contacted and told that his bone marrow had been matched to a sick teenager in France.

Despite the fact that Nelson had never met, or was likely to meet this 14-year-old boy, he immediately agreed to be a donor. What an incredible gesture.

Nelson spoke to a student journalist at his school prior to the procedure taking place.

He said: "If it's just a little bit of pain for a little bit of time that can give someone years of joy, it's all worth it." If only there were more people like him in the world!

He also went on to explain how the procedure may not be as straightforward as people think.

Nelson had many health issues of his own including sleep apnea which meant that he would be unable to be put under general anesthesia during the extraction process. So instead the doctors had decided to use intravenous therapy to harvest the stem cells.

And all seemed fine until his final physical exam.

When it was found out that Nelson had the sickle cell trait which meant he would be unable to donate his stem cells.

But the doctors refused to give up.

Within just one day they had come up with a new way to extract his bone marrow. They decided to put Nelson under a local anesthetic which would mean they could monitor his condition as they extracted the bone marrow. Which is usually perfectly safe.

Unfortunately, after undergoing the procedure Nelson was unable to speak or move.

It is thought that he suffered a cardiac arrest. His father, Willie Nelson, aged 81, said: "His eyes were open and he realized who we were but he couldn't move."

His wife and six-year-old daughter remained by his side in the hospital.

Hoping that he would wake up and start to recover but sadly this was not to be.

And on Monday, the school announced that Nelson had passed away.

His family shared the devasting news that Nelson had gone into a coma after the surgery and had never recovered. Willie said on his son's passing: "We really don't know the full story of what happened. We were expecting him to come out of the coma he was in. But he didn't make it."

Looking back on his life, Nelson was an extraordinary man who achieved so much.

He was the first black principal at Westfield High School. And, he had recently helped the school host an inspiring Black History Month assembly which pupils were encouraged to pursue their dreams and not let racism, sexism or anti-Semitism stand in their way.

Nelson had previously served as an officer with the U.S Army Reserve.

Before choosing to make a difference with the next generation, he had served for over 20 years in the Army Reserve.

And unsurprisingly, tributes have poured in since his untimely passing.

Including one from Superintendent Dr. Margaret Dolan who said she had been contacted by so many people whose lives he had touched.

He said: "What we all think is that Nelson's final act on this Earth was one of pure selflessness." What a truly brave man.

The town's Police Department also posted a message dedicated to him.

Detailing his career and all the brilliant achievements he had made in his life; both at the school where he was principal and during the years he served in the Army.

As did Mayor Shelley Brindle.

"This is a tremendous loss for our community, and I know that our children, and we as parents, will struggle with coming to terms with this over the coming days and weeks."

As well as many, many messages from his closest friends.

Some who feel that life will never quite be the same without him.

And this heartfelt message from a fraternity brother.

Clearly, this was a man who touched everyone he met; both as a friend and as a colleague.

And of course, his students.

Who spoke about how different and special he was. It is such a terrible shame that they will not get to experience his amazing leadership skills anymore.

A vigil is taking place at the school today in his honor.

It will be taking place at 8.15pm and will give students, and members of the faculty a chance to mourn, and remember their beloved principal.

His funeral is said to take place later this week.

And we are sure that there will be a huge turnout as family, friends, students, and colleagues honor his remarkable life.

Perhaps with what will be his biggest legacy...

A petition is currently circulating to try and have the school renamed in his honor. It currently has 6,657 signatures - can you add one more?