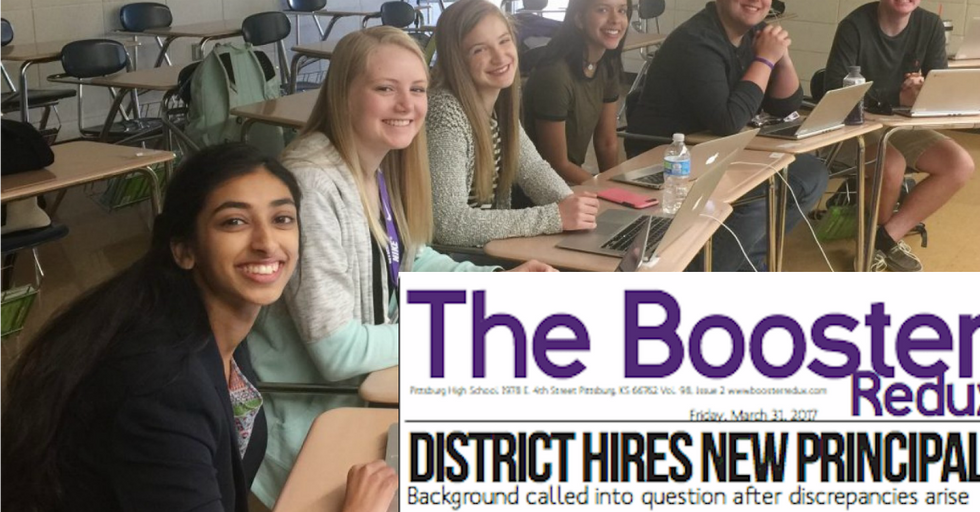 If you're going to take the job as a high school principal, you should probably be a person who has, you know, principles. Or at the very least be honest when applying for the job — and never underestimate an educated and motivated student body.

Case in point — When Pittsburg High School in Kansas got a new principal, journalists at the school newspaper got to work looking for dirt on her.

They found what they were looking for, and days after a student exposé on the new principal was published in the school newspaper, she resigned. Members of the high school newspaper took issue with their prospective principal's education, noting that the university where she'd acquired her masters degree and Ph.D. doesn't appear to hold up under scrutiny.

Indeed, a few clicks around the website for the university in question features links that lead nowhere, grammatical errors and no official address.

Students then found articles online that identified Corllins University as a "diploma mill" that sells fake degrees and diplomas. In a conference call with Booster Redux reporters, Robertson "presented incomplete answers, conflicting dates and inconsistencies in her responses," the newspaper reported. "Everybody kept telling them, 'stop poking your nose where it doesn’t belong,'" newspaper adviser Emily Smith told the Washington Post. "They were at a loss that something that was so easy for them to see was waiting to be noticed by adults."

What did the ousted principle have to say?

In a statement to the Star, the ousted principal argued that the current status of the university "is not relevant because when I received my MA in 1994 and my Ph.D. in 2010, there was no issue ... I have no comment in response to the questions posed by PHS students regarding my credentials because their concerns are not based on facts."

But let's remember, she's the one who resigned, so...

School Superintendent Destry Brown told the Star he encouraged the paper's investigation, and wants students to get real-life experiences like this one out of their education. As student journalist Connor Balthazor told the Washington Post, "We’d broken out of our comfort zones so much ... To know that the administration saw that and respected that, it was a really great moment for us." And for journalists everywhere. Well-done!