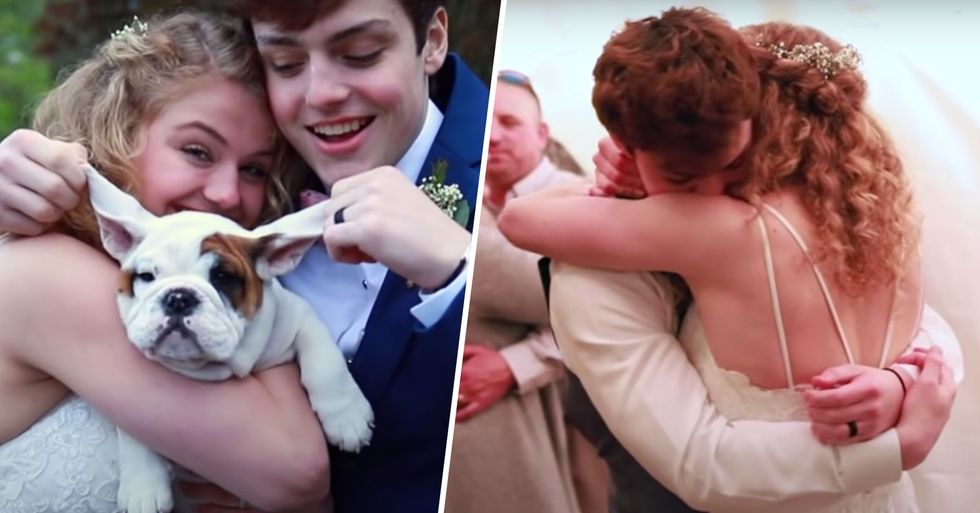 After receiving some devastating news, one high school senior decided he was going to take the plunge and marry his girlfriend in a small and intimate ceremony on his parents' drive. The photos from the event are absolutely adorable.

Read on to find out about Chase Smith's valiant battle with cancer and how he decided to achieve his life-long dream.

And the treatment we do have is grueling.

The goal is to kill as many cancerous cells as possible, all the while avoiding any damage to the normal and healthy cells nearby.

And, while someone is undergoing chemotherapy...

Their immune system becomes seriously compromised, meaning they have to avoid social interaction as much as possible.

And, during this ongoing medical pandemic...

Cancer patients have been suffering a lot.

Chase Smith, an eighteen-year-old with a rare type of cancer called Ewing's sarcoma was told he would only have 3-5 months left to live his life.

He has had a rough journey with the disease.

After going through intense treatment, it seemed as if the cancer was becoming weaker. But in March, doctors told Chase that it was back and it was much more intense this time.

With tumors all over his body, the professionals had to be as honest with him as possible.

According to The Indy Star, the cancer had spread to his skull, the fluid lining of his brain, his shoulders, lungs, and hips and no matter how much chemo he went through, it would literally be impossible to control the aggression Ewing's sarcoma proposed.

For anyone, this news could spiral them down to a dark place.

But not Chase. Just days after being given the news, he decided that he had no time to waste so he asked his girlfriend, Sadie Mills, to marry him. Keep scrolling for the emotional vlog of the ceremony.

The couple had only been together for about 6 months.

But that didn't matter to them. They loved each other and ended up tying the knot in an intimate ceremony on Mills' parents' drive, the same exact place they had shared their first-ever kiss.

In a video interview, the two described their emotions:

"Overall, it was the best day of my life," Sadie said. "I've always wanted an outdoor wedding and the fact that Chase came up with the idea to have the altar right where we went on our first date, where we had our first kiss, that meant a lot to me."

Chase then explained that this was a dream of his.

Since battling cancer from the young age of twelve, Chase quickly realized that it might be difficult to achieve all of his dreams, but this one was very important to him.

So he and Sadie planned to go to college together before fully committing to each other.

But their plans were wrecked when they were exposed to the devastating news that the disease had returned with a vengeance in March.

So there was only one thing the couple wanted to do:

"We definitely were thinking about getting married in the future and we knew we wanted to," Smith explained. "A lot of people do say, 'Oh they're getting married because he has the potential to pass away soon,' and that's not at all why we decided to get married. It was more of just a wake-up call that, 'Hey, God wants you two together.'"

"What was cool about that was whenever we were first talking about getting married, Chase brought it up and I already knew what he was gonna say. So I interrupted him and said, 'No, I know the same thing.' So that was definitely a God thing that the time was right."

The only thing left to do was tell their parents...

And they were completely supportive of their decision. "I have the best two parents I could possibly have. For them to be a hundred percent behind me and my choices and my decisions on who I love and who I wanted to marry when I wanted to marry, it couldn't mean any more to me than what it did," Chase said in the video.

And as the big daw dawned on them, they were both overcome with emotions.

Sadie, dressed in a gorgeous, white gown and Chase, suited in a navy suit exchanged vows with the closest members of their family present and it was a completely tear-inducing moment. A bittersweet ceremony.

Watch the duo's full vlog of their big day here:

If you want to read another emotional story, then keep scrolling. After spending years apart, this one couple who fell in love during the war reunited in an emotional video.