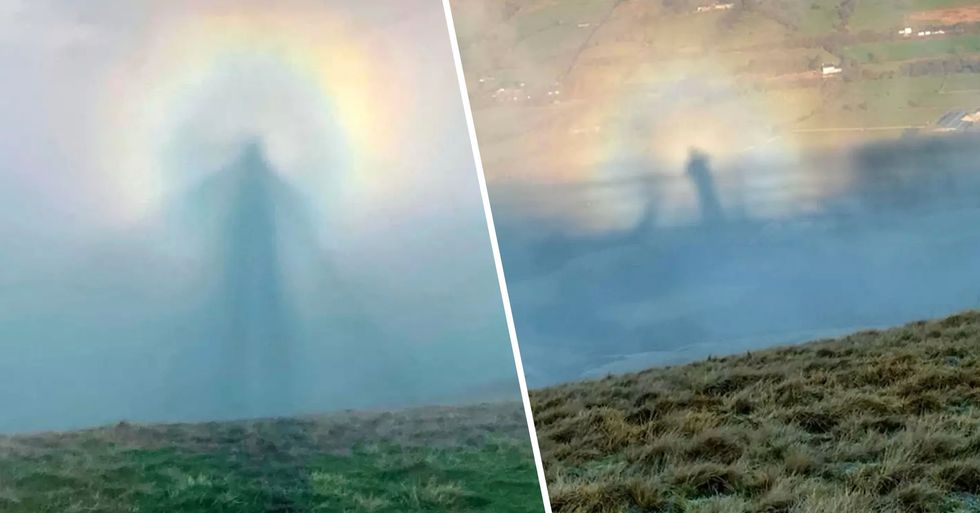 Hiking has really taken off in the past few years - and when you can see mystical sights like these, it's no surprise! Scroll on for Lee Howdle's incredible nature photography - including on spectacle that looks truly out of this world.

The recent years, hiking has really taken off.

Spending your day climbing up a big hill can be surprisingly relaxing - and fun!

Getting out in nature is good for the soul.

Especially in a world where we're so consistently wrapped up in the online.

And one of the nicest things about hiking?

Well, it has to be the incredible views you can take in.

Sometimes the natural phenomena you encounter have to be seen to be believed.

That you sometimes really need to capture them on camera to prove they're real!

And he loves (you guessed it) both hiking and photography.

Howdle saw something extra special - and rather mysterious!

And, luckily for the internet ...

He managed to capture the whole thing on camera for the world to enjoy.Thanks, Lee!

Howdle lives in the Peak District.

This is an area of outstanding natural beauty in the north of England - so named because of its many peaks! Geddit?

Mam Tor is one of the District's more famous Peaks, and is basically a one-stop-shop for stunning views.

Now, Howdle is no stranger to nature photos.

He tends to favor images from his home.

Hey, if we lived somewhere as beautiful as this, we probably would, too!

Alongside the stunning views ...

Howdle is also a dab hand at animal photography. So cute.

Sometimes, Howdle steps outside of the world of nature.

This roadside shot is super stunning.

His nature photography is where his clear talent truly shines. And his latest shot might be our favorite yet!

So, Howdle was out hiking and taking pics.

So far, a pretty normal (though rather envy-inducing) day in his life.

But then he noticed something strange.

One of the pictures Howdle snapped was unlike anything he'd seen before.

Because above the clouds?

Well, it almost looked as though an angel was posing for the camera.

Or, we suppose, a divine intervention, depending on what your belief system is?

This can actually all be explained by our friend science! Yay!

It's called a Brocken Spectre.

And it was first witnessed on Brocken in Germany's Harz Mountain Range - hence the name.

It happens when a figure stands between the sun and clouds.

Which leads the body to cast a huge (and rather imposing) shadow.

And the rainbow light?

Well, that's all to do with the beams refracting, which means they show the whole spectrum of color.

"I have never seen this before in my life. I read about it once on the internet. It's really amazing and I feel very blessed to have captured such a magical moment," he said.

But isn't it more fun to pretend it's an angel?

Fancy more beautiful nature photography? Scroll on for fifty of our favorite ever shots.