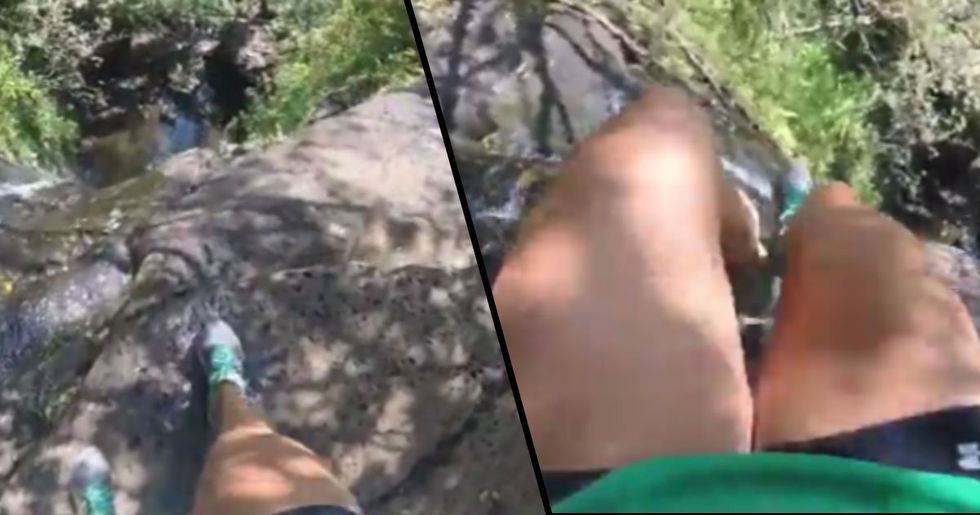 While out adventuring, the risk of seriously hurting yourself is rife, so when wearing a GoPro, the likelihood of it capturing a little more than happy memories is quite high.

And now, one woman's GoPro footage has gone viral after she took a tumble... down a 50ft waterfall. Miraculously, she managed to escape with her life, but her GoPro caught the entire fall, and the footage is terrifying to watch.

A GoPro is an adventurist's dream.

A high-quality, water-proof camera that can be attached conveniently to clothing and headwear is the ideal addition for any adrenaline junkie.

They have been known to capture some epic moments.

Surfing, scuba-diving, sky-diving, bungee-jumping, mountain climbing... you name the adventure, a GoPro is guaranteed to capture the full thing.

However, while they're busy capturing your adventures...

They can also capture the scarier moments in your life.

They have been known to capture near-death experiences.

Due to the endurance of these nifty little cameras, they are able to keep filming while you're falling to your death. And one woman learnt this the hard way after she took a nearly-fatal fall while on vacation in Hawaii.

Heather fell down a 50ft waterfall while out hiking with friends, and her GoPro miraculously captured the full terrifying incident. And this week, Heather has now opened up about her terrifying experience on the "In the World of Female Sports" podcast.

Heather is an avid hiker.

The twenty-six-year-old, who is also a student and a beach volleyball player, was hiking with friends on the Ka'au Crater Trail in Hawaii.

The trail features many different waterfalls and scenic views.

And, at the first waterfall, Heather ventured towards the edge for a better look. "The hike has waterfalls and we were on the first waterfall and I was up at the top trying to look over the edge and I got too close and I ended up slipping," she told the podcast hosts.

She slipped on a wet patch on the rock.

And she instantly plummeted down the cliff edge, directly into the path of the waterfall's lake below. Recalling her fall, Heather pointed out, "You can see there's a little trickle of water that was in the shadow that I didn't really see."

One little bit of water sent Heather flying down into the lake below.

And, though she landed into the water, she suffered horrific injuries from the impact.

Heather managed to make it to the shore.

She was able to scramble onto a nearby rock, and can be heard groaning and crying out in agony. And, though she didn't realize at the time, she had actually suffered 10 broken ribs, a collapsed lung, a fractured scapula, and deep wounds in the fall.

Unable to move, she had no choice but to sit in the lake and wait for help.

And she was subsequently airlifted by helicopter to the hospital, where she said her Christian beliefs helped her find solace.

Despite her injuries, Heather remained in positive spirits.

"When I was on the helicopter being airlifted out, it was the most peaceful moment of my life," she explained. "I kept repeating to myself God's got me I'm going to be OK and that I'm going to play volleyball again."

If you're feeling brave enough, you can watch the full video...

Though be warned, it may make you want to faint. https://www.youtube.com/watch?v=cuv_JtWu6rg

She posted a photo of herself in the hospital on her Instagram page...

And the extent of her injuries was finally revealed, with her looking a little worse for wear in her hospital bed. She captioned the post: "With the 10 broken ribs, collapsed lung, fractured scapula, and some scrapes, how could this possibly be the best day of my life? Because I was shown God's love in incredible ways that forever transformed me."

She thanked God for supporting her through the hardest time of her life.

"When everything that I put my identity in was taken away from me in an instant, all I had left was God." She wrote: "I turned to Him in amazing ways and would be writing a never-ending post if I shared all the countless ways He has changed my life in the past year. So, I thank God for this accident. Each and every day. Because without it, I wouldn't know His love in such an encompassing and undeniable way."

As well as God, she was grateful for the help of her friends and family.

"I also can't thank enough every single person who was there for me through this. I've got some fantastic people in my life!"

Friends, family, and strangers alike rallied to help Heather in her moment of need.

She continued: "THANK YOU times a million to everyone who has helped me and reached out to me during this time, from the two random hikers who let me squeeze their hands for 30 minutes while waiting for the helicopter to save me, to the doctors who fixed me up and made me bionic woman, to those who stayed overnight in the uncomfortable hospital chair just to make sure I was comfortable."

And, despite her life-long scars...

Heather is just grateful to be alive. "SCARS: We all have them. Sometimes they’re bad memories, and sometimes they’re memories that make us laugh. I added a few extra scars in one of the most terrifying moments of my life, but I’m thankful for the daily reminder of them and knowing that I was protected and made better because of them."

Heather's main concern was being able to return to playing volleyball...

And, miraculously, Heather has gone on to make a full recovery and is now able to play the sport that she loves. On Thanksgiving, she wrote: "I came close to losing my life earlier this year, but God has miraculously brought me back to the sport I love. I'm thankful for getting to play that sport on a beautiful beach on Thanksgiving, for the doctors who fixed me and made me better, for my friends and family who showed their unconditional love."

However, not everyone is so lucky.

2 years ago, a young man was swimming at a waterfall with his GoPro when he came into difficulties and tragically drowned. His GoPro went missing along with his body and has only just been uncovered now, with all the footage of his final moments on Earth intact. Keep scrolling to hear more about the story, and to see the heartbreaking footage of Richard's last few hours.