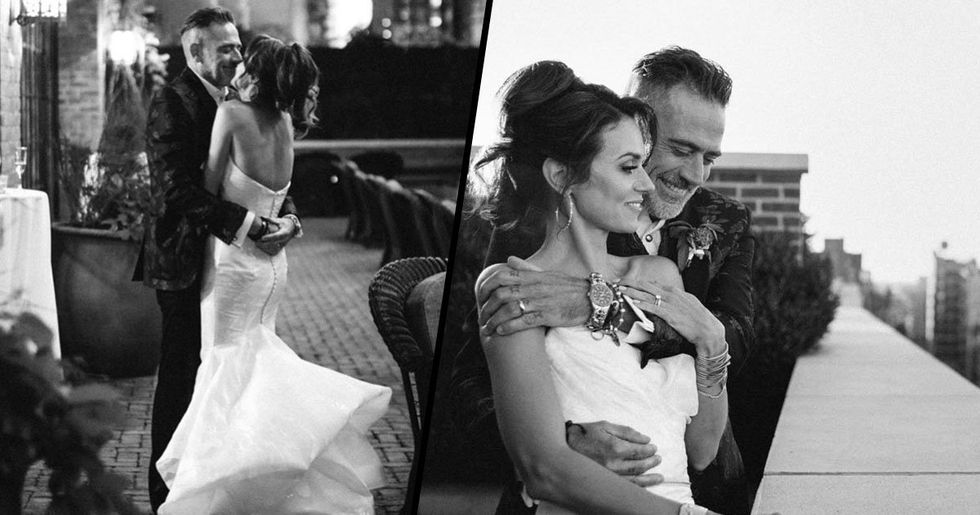 Watching our favorite Hollywood beaus tie the knot is truly heartwarming and it's also so exciting to see the lavish and expensive ceremony that A-listers enjoy to splash out on.

The most recent star-studded couple to get wed is Hilarie Burton and Jeffrey Dean Morgan after they have been dating since 2009. The happy couple have been through a lot together, so it seems only natural for them to finally make their relationship legally official, so keep scrolling to get a sneak peek at their gorgeous wedding snaps...

Hilarie Burton and Jeffrey Dean Morgan are veterans in the world of Hollywood couples...

The couple have been dating since 2009, which must be a world record in terms of A-lister relationships!

So how exactly did this relationship blossom?

Born in 1982 in Virginia, Hilarie is a well-known actress and producer who is famed for her portrayal of Peyton Sawyer in One Tree Hill between 2003-2009.

Jeffery Dean Morgan is a veteran in the television industry...

Jeffrey, who was born in 1966 in Washington, is also famed for his roles on American television, including his portrayal of Denny Duquette in the medical drama series, Greys Anatomy, between 2006-2009, and his role as John Winchester in fantasy horror series, Supernatural.

Jeffrey had already been married previously...

In 1992, he married actress, Anya Longwell, but they were divorced by 2003. He was then briefly engaged to former Weeds costar, Mary Louise Parker, but this came to an end the following year.

It was all thanks to Jeffrey's Supernatural colleague, Jensen Ackles, who organized a double date with his wife, Danneel Ackles.

"I [got lit]. We all did. We ended up back at my house drinking shots of tequila," Jeffrey recalled in an interview back in 2015.

The pair made their red carpet debut as a couple in 2010.

But they completely shocked Hollywood when, in the same year, they announced that Hilarie had given birth to a baby boy named Augustus.

Things seemed to be going very well for the budding new couple...

A source told E! News at the time, "She told friends about her pregnancy back in August [2009] after she had spent a lot of time with Jeffrey on location in New Mexico."

Reports were circulating about a secret wedding, but Jeffrey quickly shot down these hopeful rumors.

The little family moved away from Hollywood...

They settled for a much quieter and reserved life in the town of Rhinebeck in Dutchess County, New York, where they both raised their son.

They were both still active on our TV screens, however...

Hilarie was cast on Jeffrey's CBS series, Extant, which was done in favor of their family life. "When I took the job the deal was, ‘We'll get you home as much as possible,' and that just hasn't worked out. But Hilarie got a job on Extant, which was fantastic. You'll see her a couple of times throughout the season, so that's one way we've been able to keep the family sort of together," Jeffrey said in an interview.

Their family continued to grow...

In March 2018, Jeffrey confirmed the birth of their daughter, George, by tweeting: "Hey y'all... baby gal morgan is spectacular. We're just respecting her wishes for laying low a bit longer. But we super appreciate all the well wishes n stuff. Thank you."

As well as building a home for their family...

Samuel's Sweet Shop is located in their hometown...

Jeffrey, Hilarie, and Paul took on the shop after a friend of theirs passed away. Speaking in an interview, he said: "A friend of ours, who owned it for twenty-plus years passed away tragically... We now own a candy store in upstate New York and we have great coffee and great chocolates."

The moment the entire world has been waiting for arrived yesterday, with the couple posting the most beautiful photographs from their wedding over the weekend.

It was an intimate ceremony...

Jeffrey wrote on his Instagram page: "Thank you to our friends and family. It was, without a doubt, the best day of our lives. Ever ever. Just never knew that it could be so damn perfect. It was. And more."

"The past weekend was the best of my entire life," she wrote. "There are dozens of thank yous I need to make... but before we do any of that, Jeff and I just want to put it out there that WE GOT MARRIED! For real. We've lived as husband and wife for a decade. We've built a family, and a farm and found our community."

"From the moment I met Jeffrey, he was my husband. Rather than make vows right out of the gate, we lived them. For over 10 years. The good times and the bad. Standing up there with our children at our sides - celebrating all that has been - was bliss," she went on to write.

"I love our intimate group of family and friends who joined us. I love the various circles of loved ones who have supported us over the years. It was private and magical and everything I dreamed. So yeah, I'm Mrs. Morgan."

Their love is one of a kind...

From the commitment they have shown over the past decade to their family, it's safe to say that Mr. and Mrs. Morgan are perfect for one another. To keep reading about celebrity marriages, keep scrolling to learn more about the official Bieber wedding...