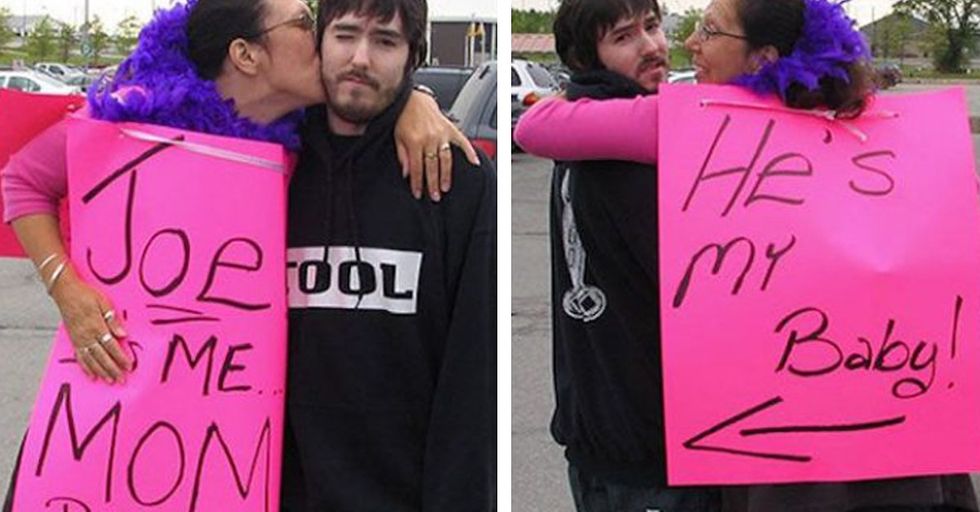 Have you ever dreamed of stepping off a flight and seeing a nice weirdly adorable foreign man in a suit holding a sign with your name on it? Well, I have. For some reason, that kind of thing has always screamed, "I'm rich AF." Well, these are not those signs.

These are the signs you return to after taking a month off to "find yourself" while you leave your aggressive hamster, Pickles, with your sister during mating season. The signs you'd see when you return from your first semester in college, obviously hungover. The signs you'd see after jetting off to Hawaii without warning and finding your new "soulmate," Steve.

They're not the nicest signs in the world, but boy are they funny. And we've got a bunch of them for you to love. So put on a sleep mask and turn your phone to Airplane mode while we break down our favorites.

Starting off with what I hope is an obvious joke.

British humor at its finest. Just so bone dry. Look at this guy's face!

"You did your best." So... did she not make it all the way through? I have so many questions.

Please refrain from any debriefings until after you leave the airport. Thank you!

Did she fly first class?

I hope mom showed up in an orange jumpsuit to really scare everyone else in the airport.

We really hope it works out for him and his new wife. I hear they're still together and very happy.

Hey, your sign's upside down.

As an idiot, nothing would make me happier than seeing this idiot picking me up from the airport.

Are we in Ireland?

If this man doesn't show up wearing a hide jacket and a sheathed sword, I don't even know what clad McGregor is doing anymore.

After using public restrooms for your entire vacation, there's nothing quite like a solid Imodium and chill.

This person was reportedly seen outside of LAX.

She told reporters that she had been in traffic for six days trying to make her way to the airport.

If I were the parents, I'd walk right past.

Also, does that woman in the background count as a fourth orphan? Because she seems real happy to be there.

Mom of the year.

Because what's the point of having children if you can't embarrass them every now and then?

Please escort yourself to the nearest strip club, sir. I think you're lost.

Just kidding, this is freaking adorable. I hope they somehow managed to hang this sign on the fridge because it's art.

They fattened up that baby.

Or at least I hope she's talking about the baby and not herself. That would be pretty mean.

Just a baby casually driving to the airport to pick up their parent.

Does that baby have a license? Did she drive a Barbie Jeep or like a real car? So many questions.

Please tell me they're not dating.

I need them to be father and daughter, for my own sanity. Maybe she's older than she looks. Maybe he's younger than he looks! Who knows!

Looking for a pilot.

Because obviously, the two hottest guys at the airport are sexy pilots. They always are. Have you ever seen an ugly pilot? I haven't.

I have a sneaky feeling Mom is the one who wrote this.

Either that or sign this baby up for college because (s)he's ready.

Don't propose at an airport. There's no reason to. You're not in a romantic comedy (I don't think). Still kind of cute though.

I don't want to meet this guy.

For several reasons, but most of all because it looks like he could kill me.

This is pretty much how I feel every time I fly home. Maybe I should have just stayed in California.

Who is this scary man?

He looks like he's ready to snipe someone in a moving vehicle after downing an espresso shot like a maniac.

Once again, dad's prove that they cannot be stopped. Just crank the embarrassment up to 11 while you're at it.

Is this enough evidence for a jury to convict? Because it sure seems like it is.

Let's hope this is some kind of weird Series of Unfortunate Events type situation where the kids were left to fend for themselves, because if not, Dad's got some 'splainin to do.

And this man just shot up to the top of the list. Every day is National Margarita Day.

Stay away from this guy.

My real hope is that "Brian" actually is a murderer and everyone thinks it's a joke...

Who is this Princess? I must go to her. I am needed by royalty.

You're too old for this.

Credit to the guy for showing up to the airport in a onesie though... I wouldn't be brave enough. Enjoy these? Stay tuned for the most hilarious notes left by passive-aggressive neighbors...