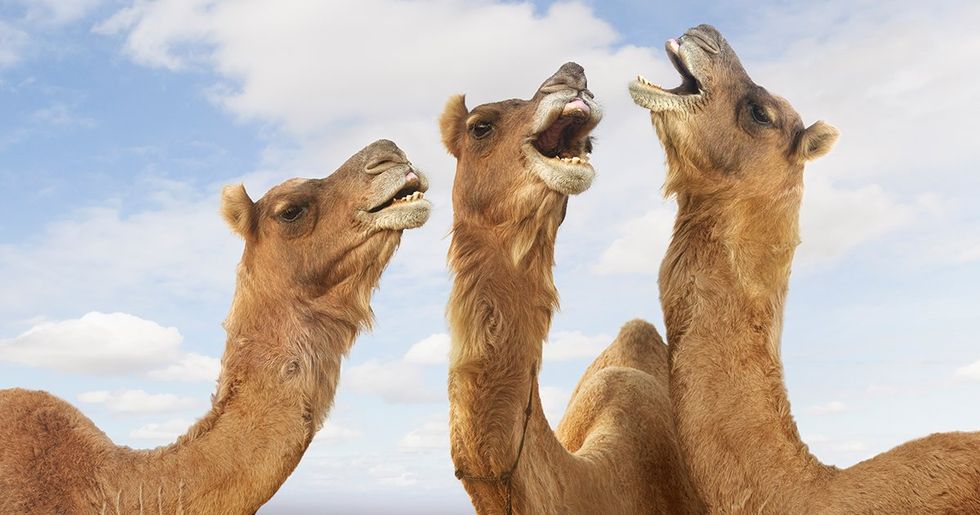 Sometimes, most of the time, a conversation can only be enhanced by the addition of a funny animal GIF.

There is almost no situation that an animal GIF doesn't improve. So without further ado, here are 19.

When you're feeling snacky

When you're shocked beyond belief

This pug looks like two different dogs, one when it's lying down and one when it pops its head up! Love the concerned furrowed brow.

When you're plotting world domination

The lick of the paw before flipping the page is almost too much to handle. So good.

When you're taking a bath

Um, duh, you are the cute little pink piggy in this scenario. Unlikely animal friendships are the best kind of friendships.

When you can't take it anymore

Raise your hand if you sometimes wish you could just fall down and give up. If you don't have your hand raised, you're lying. The next one will make you squeal with delight.

When you're dreaming of dogs

You need this GIF of weiner dogs dressed as hot dogs running through a field. You just do.

When you see something scary

This owl is making the exact same face I made through the entirety of Hereditary. That's one scary movie.

When you need a hug

These monkey friends know what's up. Sometimes you just need a hug from your friend with the longest arms.

When you're trying to get someone's attention

This is exactly what my little brother used to look like when he would try to get my attention and I would try to ignore him.

When you're hiding secrets

Have you ever been sworn to secrecy and then stuffed your mouth with carrots so that you wouldn't spill your guts to the first person you came across? This little guy knows what I'm talking about. The next one is a panda who's really going for it.

When you're loving life

This panda's living the good life, scratching his back and swinging from tire swings. That's what I'm talking about.

When you smell bad

When you couldn't care less

I just love this pup, who absolutely refuses to play his owner's dumb games. He is so not having it.

When you hit a stumbling block

A ridiculous amount of my life can be summed up by this penguin who trips and falls in the snow. I get it, dude.

When you want to take a nap

This is a dog who knows exactly how he likes to nap and achieves it perfectly every time! The next one will make you go, "Awwww."

When you're feeling lovey-dovey

Or should I say, lovey-cockatiel-y? So adorable.

When you're trying your best

We've all had moments just like this polar bear here, where we make an effort for a second and then it's too hard, and we give up and just accept our situation.

When you're feeling fine

You'd flaunt your feathery ear things too if you had them! Strut your stuff, creepy little sea creature!

When you're feeling affectionate

Free love among the walruses, baby! Love it!

When you need some encouragement

Every so often, we just need someone to pat our head and tell us everything is going to be OK. Share this with someone who needs some animal GIFs in their life!