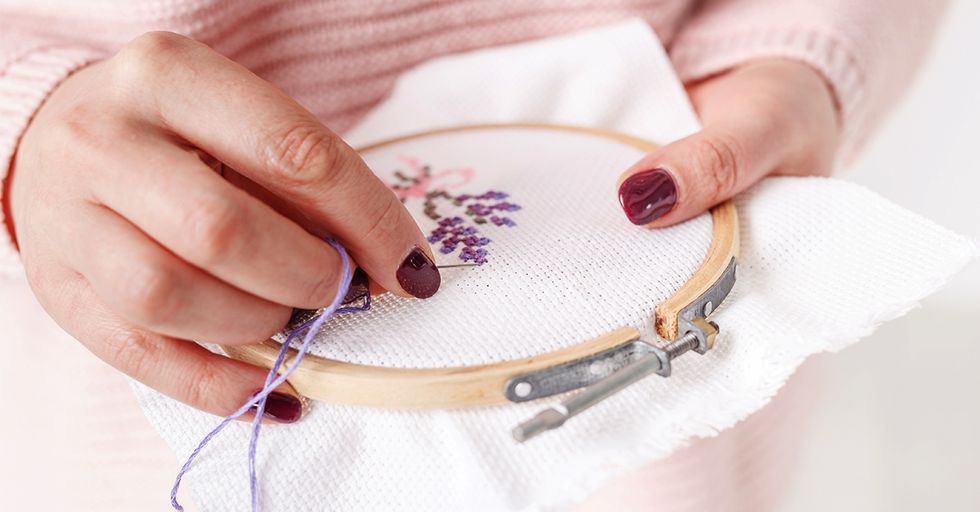 19 Funny Hand-Stitched Projects That Will Make You LOL

When you think of cross-stitching, you probably picture prim and proper women from olden times stitching Bible verses or well-known proverbs surrounded by a bunch of flowers, right?

Well, friend, I'm pleased to tell you that there's so much more to cross-stitching these days.

As it turns out, you can stitch anything onto fabric.

People have taken cross-stitching to new and hilarious levels. Here are some that are sure to leave you in stitches.

We've all seen this comic on the Internet before, right? Haven't you wished you could hang it in your house? Cross-stitch it and voilà! It's art! Hang it on your walls!

You're a shooting star.

Hm. I thought they were going a whole different direction with that one.

Fair enough! Sometimes there's no one to blame but yourself.

Only Judge Judy can judge me.

If you don't have a Judge Judy cross-stitched work of art in your home, what are you even doing with your life? This next piece of cross-stitch is great for fans of both Harry Potter and brunch!

Pretty sure this is a direct quote.

You know that if J.K. Rowling had included a brunch scene in the books, Hermione would absolutely have said something like this. I know I'm going to say it at my next brunch!

For the happy (and sinful) couple:

What a lovely housewarming gift for the couple who's living in sin! Their lifestyle may not be right in the eyes of the lord, but that fine stitching sure is!

What's your favorite parable? Mine is the one where Jesus tells that guy it's easier for a camel to puff puff pass through the eye of a needle than for a rich man to enter Heaven.

I would seriously love this one for my own home. I might change it to 8:00, though.

Is this a meme?

If you're looking to get into cross-stitch, I recommend recreating your favorite meme with embroidery floss. It's all kinds of good. This next one made me laugh out loud.

#Relatable. I'd make my own version of this, but I'm kinda tired.

This is our prayer.

Now I lay me down to sleep, I pray my home Godzilla keep. If he should come before I wake, I know the ground will start to quake. Amen.

Say what you will about these punny tea pieces. I think they're SEW cute.

This is actually true.

Look it up! A small group of people is called "Something I can deal with as long as everyone leaves by 8:00."

If you're looking for a lot of personal space, outer space is actually a pretty good option! Fair warning: This next one has some NSFW language!

Don't believe them? They literally stabbed that piece of fabric hundreds of times. I'd take them at their word.

(This one has some salty language, too!)

I wouldn't complain about anything in this work of art if I were you. Something tells me the person who made it doesn't care much for criticism.

A manatee of a different color!

There's only one thing I can say to this one: D'awwwwww!

Here's one that expresses how a lot of us are feeling:

You don't always need fancy, frilly words to communicate. Sometimes, a simple Dumpster fire will do.

Or, if you're feeling particularly motivated, go for both! Share this with a crafty friend!