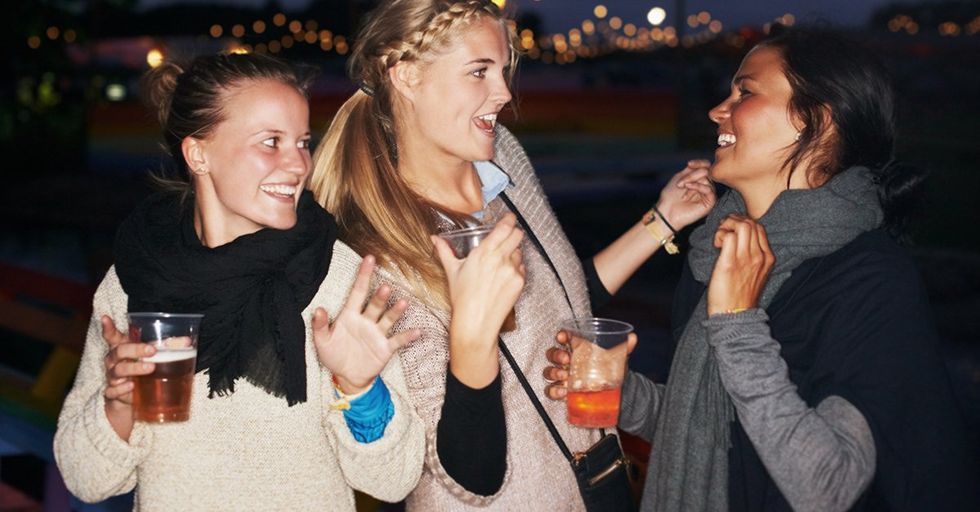 We all know someone who can be a bit of a handful when they're drunk. And if you don't know someone like that, well...there's a chance that you are that person.

Whether it's texting a bunch of people that they love them, dancing on tabletops, or just straight-up getting themselves into ridiculous situations, there are some people who can really add a lot of entertainment value to your life — ideally, they are great friends both while stone cold sober and after they have had a few drinks.

If you ever find yourself looking for a new friend to keep you entertained during a night of drinking, we recommend you seek out people like the ones in this list. They certainly seem to know how to have a good time.

She's literally right next to you. Right. There. I guess it's nice that he's looking for her, though.

Whoa! Is your mind as blown as mine is right now? SO BLOWN.

It's always nice to have a friend who's willing to play a game with you. It's even better when you're pretty much guaranteed a win.

Kelly clearly knows how to have a good time. I have a sneaking suspicion that she may do this while sober, too.

This guy on a broken escalator:

I really admire his patience. How long do you think he stood there?

Couldn’t get a taxi home last neet so I went in kebab shop and ordered a delivery to my address and got in with delivery driver, im a genius
— Jake Woodcock (@Jake Woodcock)1509897504.0

I don't think I could come up with a plan this smart regardless of how much alcohol I had consumed. As a bonus, he also got to eat kebab!

If that's not true love, I don't know what is. Have you ever loved someone more than pizza? Didn't think so.

This would have been a completely flawless idea... If they had remembered to actually eat it.

I suddenly have a craving for a McDonald's hashbrown. And for a fancy camera.

I guess that if you're a photographer, you should always take your camera with you no matter where you go. Even if you're going out for drinks.

This is the funniest and smartest thing I've heard about all day. Why did I never have this idea when I was young and single?

They say that some people reveal their true colors when they're drunk. This guy is obviously an absolute gem.

I mean, there are several reasons I would try to befriend Winston Churchill, but this is definitely in the top three.

If that's not the sweetest thing you've ever read, I don't know what to tell you. I hope these two are still best friends to this day.

Yeah. Pretty sure you're never getting another Uber again.

There's only one word for this. "Oops."

This (kind of) responsible person:

Hey, good on this person for asking for a ride rather than endangering anyone. And good on them for actually getting the ride...way prior to that.

Everyone should have someone who will keep you from doing something really dumb while you're drunk. Like going to Jeff's. Don't go to Jeff's.

Do you ever get so drunk you just print out motivational words and hang them up on the wall. Apparently I did http://t.co/FIpYZFwH2t
— eric curtin (@eric curtin)1445118006.0

You know, I was having kind of a tough day until I saw the "run" poster. Now I feel like I can take on the world!

So close. And yet, so very, very far.

At least he didn't try to put a bunch of water in there. That would have ended poorly.

Well, future you certainly isn't going to thank you, but at least they'll know exactly what to blame past you for.

So we were just being drunk and disorderly, minding our bald headed business and a lovely photographer was like ‘oo… https://t.co/nnQILUikCB
— Mrs Loverman (@Mrs Loverman)1525727562.0

I have never looked half as awesome in a single picture ever taken of me. I need to know these people.

Sure, he might be stuck there for hours and end up with painful adhesive on his skin. But he's definitely not rocking anymore.

Honestly, this would probably fool like 92 percent of all moms. I wouldn't worry about it too much.

Not only does your friend now have an awesome hairstyle; you can also keep track of them throughout the night! Brilliant.

Everyone needs friends who will — without objection — don their fanciest sweater and take part in a photo shoot.

It's true. If you plant a Cheerio, it will turn into a bagel. Trust me. Share this with your BFF!