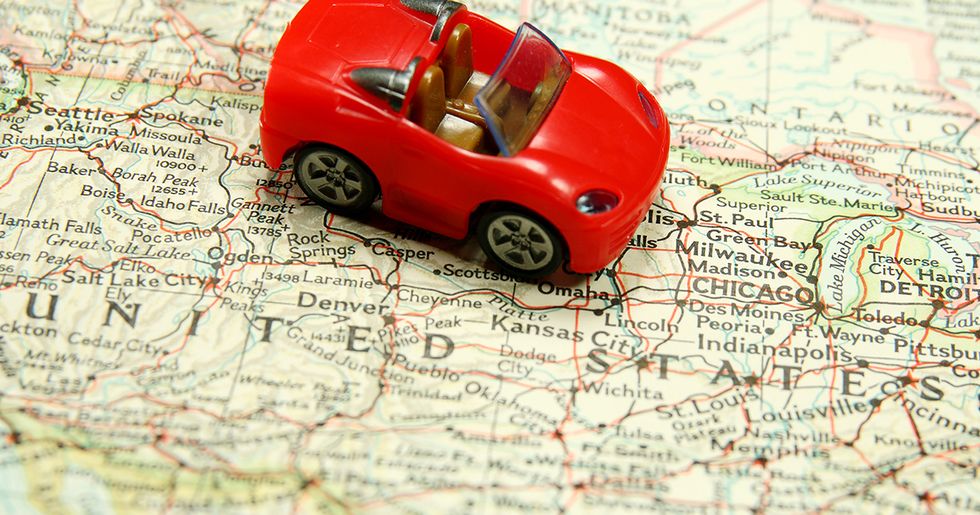 If you live in a city where you don't have to drive a car, congratulations. You figured it out. That's wonderful for you. For the rest of us, we spend a lot of our day in the car. And if you have lived in a few different states or have traveled around the good old U. S. of A, you are probably aware that there is a lot of variety to each and every state in the union. Maybe you drove through Texas, Arizona, and New Mexico to get to California. Each of those states is very different when it comes to what you see on the road from the driver's seat.

Luckily, there's the "driving in" meme, which illustrates, using lines, emojis, and words, what exactly it is like to drive in almost every state in the country. It is funny, it is weird, and as someone who has driven through a bunch of states, let me tell you that it is quite accurate. Maybe you are from one of the states on this list, or maybe you will have to create your own "driving in" meme!

Pretend you're a cat driving a car.

You're looking out the window as you drive through so many new and interesting places. What do you see?

It's true. The traffic is insane and so are the billboards about STDs. This pretty much sums it up.

There are...a lot of Walmarts in Arkansas. Is it weird that I'm rooting for the one Sam's Club? Like, they're persevering against all odds.

There truly are Dunkin' Donuts everywhere in Massachusetts. And potholes, apparently.

There really are lots of cacti and scorpions in Arizona. It's full of pointy things. Oh yeah, and jokey billboards about smashing your head.

So much wildlife and so very few towns in Maine. This looks about right. Maybe needs a few more trees.

What is Oregon, the land of the four-way intersections? I had no idea. I'll have to pay attention next time I'm there.

I guess I didn't realize that South Carolina was a pothole-laden Jesus town. Who knew?

Driving in Alabama seems lonely (you're the only car on the road) and scary (you know, with all that devil stuff).

Apparently, while driving in Florida you are constantly bombarded with alligators and strong feelings about abortion.

Really? The whole state of Vermont doesn't have billboards?! I don't know why, but this seems crazy to me.

I am assuming this person means Lincoln, Nebraska, but correct me if I'm wrong. Cows, horses, churches, planes... Sounds about right.

Apparently, all over Connecticut, there are billboards that read "Your wife is hot. Better get your A/C fixed." HA. Clever.

I don't remember New Orleans as being full of potholes, but I was there many years ago. I do remember it being full of trapdoors, though, so maybe that's what this means.

Have you ever driven in New Jersey? This is really accurate. New Jersey drivers are the worst. Sincerely, a New York driver

Cows, cowboys, and warnings against using meth. Montana sounds like a hoot!

I love the emojis chosen for the Vegas Strip. It's so accurate! Also, the billboards here are second-to-none.

Why do all these states have corn on one side of the street and straight-up terrifying messages about coming face-to-face with God on the other side?

I assume this is in areas other than New Orleans. I love a good local commercial or billboard reference. Even when I don't get it, I get it, you know?

Some of the biggest adult video stores in the world are off the highway in random parts of the country. #TheMoreYouKnow

Wow, there's a lot going on in Michigan. Are those gusts of wind or moose farts?

OK, I never want to drive through Oklahoma. I am not equipped to be dodging tornadoes left and right like that.

Utah is supposed to be so beautiful! And yeah, also so full of Mormons! What's that sideways car doing there?

Besides all the traffic, this seems really nice! Share this with someone to make them laugh!