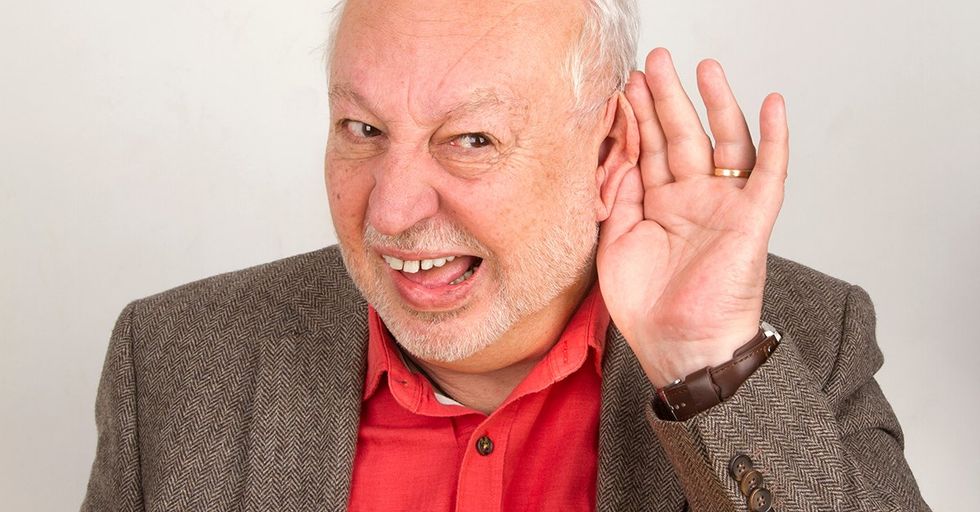 19 'Overheard' Conversations That Will Have You Doubled Over in Laughter

It's not nice to eavesdrop.

But if you happen to overhear a hilarious conversation, well... that's entirely different.

Overheard conversations are the best because you have no context at all for what's being said.

Most of the time, you're hearing only a portion of the conversation, which means it usually makes so sense. These 19 overheard conversations are super funny for precisely that reason.

Eat cake and be sassy

I actually think that was Marie Antoinette's full quote: "Let them eat cake and be sassy." She just wanted everyone to be happy.

Don't you just love when you think two women are talking about sexytimes but they're actually flipping out over a gooey, cheesy pizza?!

What a cute, supportive couple. If you've ever stepped foot in a Target, you know how hard it is to stay out of the clothes section.

Ugh, this is so true though. Maybe I'd get really fit f I were a zombie, though. The next one is adorably scary.

In case you were wondering if little kids are affected by Youtube culture. I present this mess!

Yasss, girl, get it! This is the kind of self-love we should be promoting in young girls from the time they are young!

This little girl knows what's up. Quick, go home and hide this stuff all over the house.

This is amazing. You get it, mom.

There is nothing you can say to make this person understand what happened. You just have to go deal with it. The next one is also absurd.

Whoa. Dramatic. Camp is the place where real friendship sh*t goes down.

You know, they made that documentary about it. It's called Independence Day, and it's definitely a documentary.

Fingers crossed! Man, they really do make us wait for ages for those episodes.

I think "Ice juice" is the most upsetting phrase I've ever heard in my entire life. It makes the hair on the back of my neck stand up.

Jedi training at Disney World is serious business. The next one is hilarious because it's between two little kids.

The fact that a seven-year-old is saying this to a five-year-old just makes it all the more hilarious.

Little league games can be so intense, and if you've never lived through one, you haven't known stress. Sincerely, Someone who grew up in a baseball/softball family.

If I heard this out in public, I don't know if I would be able to resist contributing a hearty, "Hear! Hear!" Hashbrowns are better than tater tots. Full stop.

Dude, I do not blame them one bit. The next one is a doozy.

What a totally terrifying and unfair threat! It is way too scary for a toddler to handle. I could barely watch it!

just overheard the gentleman in the next stall whisper "get out of me" and then start to cry. god i hate the olive garden.
— Ten Min Jokes (@Ten Min Jokes)1536995413.0

Wow. What a moment of intense drama between a man and his bowel movement. The things you hear at the Olive Garden.

This is incredible. I hope Peggy understood the gravity of the situation.

I mean, this is how most things work. Seems like this little girl is getting the hang of this thing we call life.

Look, no matter how much you reason with animals, sometimes they just won't listen. It's a useless thing to try to do.

What is boring about flying a plane?! Who are these people?! What are the lives they lead?! I must know more.

Hm, see I think both of them are wrong, here. Spring water is water....from a spring.

Just overheard a little girl at work telling her mom that when she grows up, she wants to be a bumblebee.
— hello pity (@hello pity)1537029427.0

I think that's a fine goal to have! Bumblebees are cute. They just go around drinking up sweet pollen from flowers and not bothering anybody.

I love the idea that super religious people think that one day, a giant dinosaur is going to descend upon the Earth and destroy everything.

Well, I hope it was Steve's first day. It would be really embarrassing if he was working there for like, several months.

Was this person just joking or did they really think this was a show? But also, I wouldn't put it past HGTV to make this show.

This is a good question. My grandpa's name was Charles Mason, and you better believe there were a few unfortunate mix-ups.

A couple things: Sangria is Spanish. And I don't necessarily go to the Olive Garden for authentic Italian food.

“I sing when I poop just because it’s long and I am bored” -Roommate, during supper #SundayNight #Overheard #apartmentliving
— ICanHearYou (@ICanHearYou)1537746797.0

What a great strategy for passing the time! It's much more creative than just playing games on your phone.

This is very true! And those are some mighty fine hot dogs.

This is such a gen Z sentence. I can hardly stand it. What a reason to want to visit London.

Has anyone with a smartwatch ever thought of this?! In ten years, we're all going to wonder why we ever thought smartphones were a good idea.

A little word of advice... If you have to say you're the favorite kid, you probably aren't.

This is the exact conversation anyone has with people when they find out someone from their high school has become a doctor.

I have several questions: Where is this office? How can I meet Ignacio? Can I have him?

Oh no! What a turd. This guy should be kicked out of the club.

"If they ever change the lettuce, I'm going to flip" - Cute little old lady at the next table #overheard #OliveGardenProblems
— OliviaGardeen (@OliviaGardeen)1537845583.0

I never realized that people have such strong feelings about the Olive Garden! What's so special about the lettuce they use, anyway?

Um, were these people rehearsing for a movie. Because if they weren't, I feel like this person is obligated to call the police?

Oh man, this is just real and all it did was make me miss New York so much. It's so true. It's a no BS city.

I don't understand this logic. I have a feeling this drunk girl was very, very drunk.

If there is one lesson we can take away from this overheard conversation, it is this: Do. Not. Skip. Leg. Day.

Is this true?! What medical conditions warrant this prescription?

If you've ever struggled with what to bring to a housewarming party, you relate to this. Share this with someone who always eavesdrops on conversations!