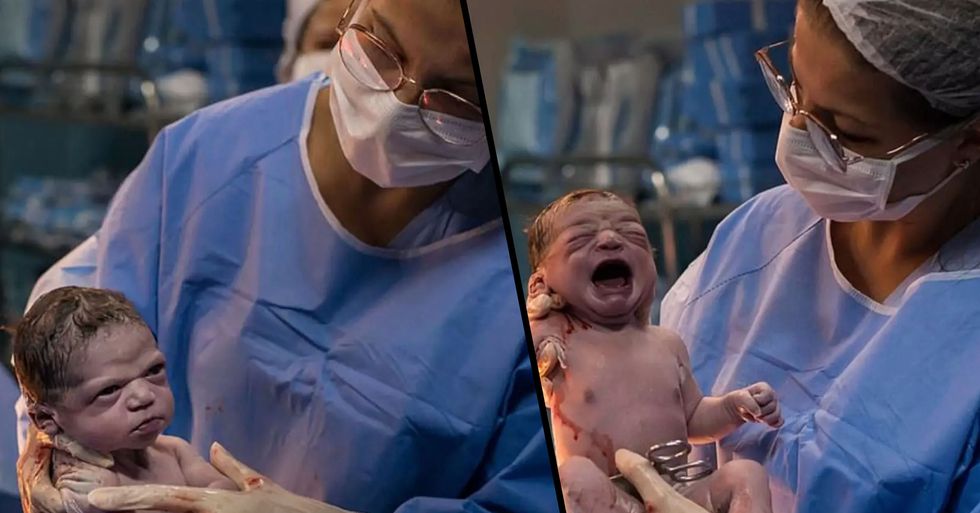 Every baby born is a special baby.

Keep scrolling to check out the newborn baby who was born frowning...

Some babies prefer to make a speedy entrance into the world, leaving some moms with no choice but to give birth in the traffic en route to the hospital.

And some babies prefer the longer route out...

Leaving their poor moms in labor that could last for days.

But every mom and dad will ultimately experience that very special moment...

And that's when they first set eyes on their beautiful newborn.

But a set of parents from Brazil were left completely amused after their daughter arrived in the world...

And thankfully, a photographer was on hand to capture the incredible moment.

Rodrigo Kunstmann thinks that childbirth is a unique moment that deserves to be captured...

And out of all the births he has witnessed, the birth of Isabela Pereira de Jesus was certainly a unique one.

Daiane and Renato Pereira da Rocha had not planned on having a baby...

And even though Daiane was warned of the risks of miscarriage, her pregnancy was very smooth and their baby girl arrived safe and healthy.

Isabela was born in Rio de Janeiro on February 13th...

She arrived via a cesarean section, and, unlike most babies, who wail and scream, she had an unusual reaction to the outside world.

Isabela gave her biggest frown when she arrived...

Speaking to Brazilian publication Crescer, Rodrigo said, "She opened her eyes wide and didn't cry, she made a 'sulky' face, her mother gave a kiss and it was only after they cut the umbilical cord that she started to cry."

"When I posted it, I thought it would have the potential to become a meme, but it's always a matter of luck," Rodrigo said.

Speaking to Brazilian news outlet G1, she said, "My baby was born courageous. It's a meme already."
"She always wrinkles her forehead when changing diapers and nursing. Isabela was supposed to be born on the 20th, but she chose her day already showing her personality."

Isabela is probably the most relatable newborn baby ever.

Make sure to keep scrolling to see the newborn baby who greeted her dad with a big smile...