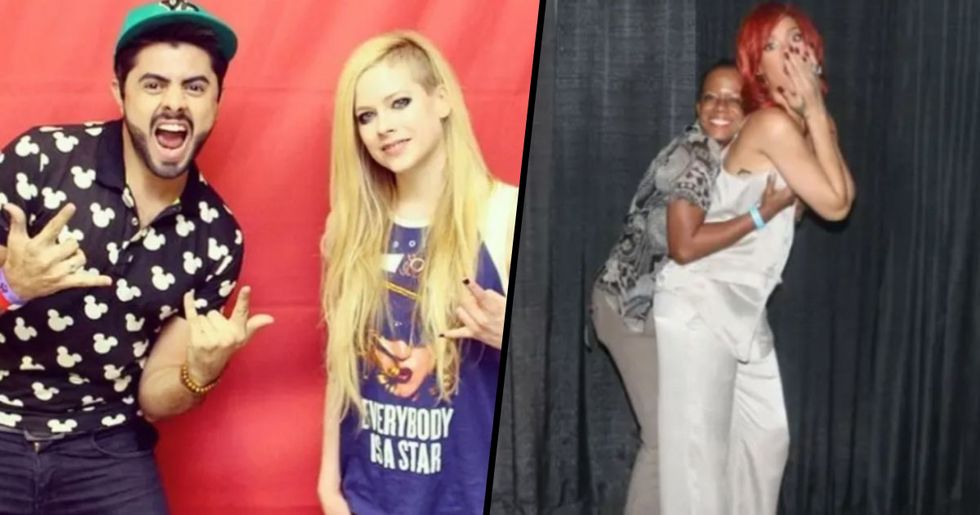 Meet and greets are always pretty special moments for the fans of the celeb holding the events.

Meeting your one true hero must be truly incredible, and fans treasure those small moments for the rest of their lives.

So imagine meeting your hero to get home and find out that the photo that you snapped with them was incredibly awkward...

This is how many fans of Avril Lavigne felt when they took part in a meet and greet, but fans of Rihanna, however, felt the total opposite. Keep scrolling to see the comparisons of these hilarious photos...

When fans get the chance to meet their one, true idol - it's a special moment.

People pay big bucks to go backstage at gigs and meet their heroes...

And when an extortionate amount of money is paid, you'd expect an unforgettable experience, right?

The Canadian singer rose to fame when she was just fifteen and she very quickly became an icon in the pop-punk world, causing every teenage girl in America to bring out the pink hair extensions and black kohl eyeliner.

Avril has reemerged recently for all of the wrong reasons...

Avril is known to have taken part in meet and greets before her gigs, and it was reported that each meet and greet ticket cost a staggering $400.

But it was the photographs that caught the world's attention...

How awkward?! Avril couldn't look more uncomfortable if she tried in this meet and greet in Brazil, and this has caused the internet to draw up a comparison to the one and only Bad Gal Ri Ri.

Rihanna is known well for her warm and friendly personality...

And this was certainly portrayed through a series of meet and greets that the Barbadian beauty did that have been used to compare to the hideously awkward ones of Avril.

Now that's how you do a meet and greet...

RiRi was happy to get up close and personal with her fans, even if that meant them having their hands all over her.

Now that is making me want to meet Rihanna myself!

Avril doesn't seem to know how to react around her fans...

Because, let's face it, her fans absolutely love it.

We understand that meet and greets can be overwhelming...

But, when fans are paying so much money, they don't deserve a stiff and awkward looking photo.

That's probably the most half-hearted "rock on" gesture that has ever existed.

Nothing beats a warm hug...

Famous musicians and actors often credit their fans for their success and talk about how much they appreciate their following. Rihanna's warm embrace of a fan truly shows her own admiration of her following.

It's almost as if she's been told, under strict instructions, to stand solidly in the same spot with each and every fan. There's no movement there, at all.

Here she is pouting alongside a dedicated fan. No biggie.

This is just getting uncomfortable...

You could at least try to pretend to be okay with posing for a photo, Avril...

This little girl's dream came true with her idol posing alongside her with matching red locks.

Yet another stand-still snap of Avril...

Can this girl even move?

RiRi isn't afraid of getting down and dirty...

It's safe to say that anybody would let Rihanna straddle them in any situation...

Rihanna is a total queen...

And she handled her meet and greets like a complete pro.

Of course, these situations can be daunting for many...

And it is highly likely that Avril just gave in to her stage fright and shyness, but this hasn't stopped the internet from creating a laughing stock out of the skater girl.

It didn't take long for the memes to hit, with internet trolls photoshopping Avril in bizarre situations with her fans.

The home of the horribly awkward encounters with strangers... which fans have deemed a suitable place for poor old Avril here.

Sorry, Avril (we still love you).

Her friendly and kind nature is a perfect example of how celebrities should treat their fans.