Hilarious Pictures of Babies Who Look EXACTLY Like Celebrities | 22 Words 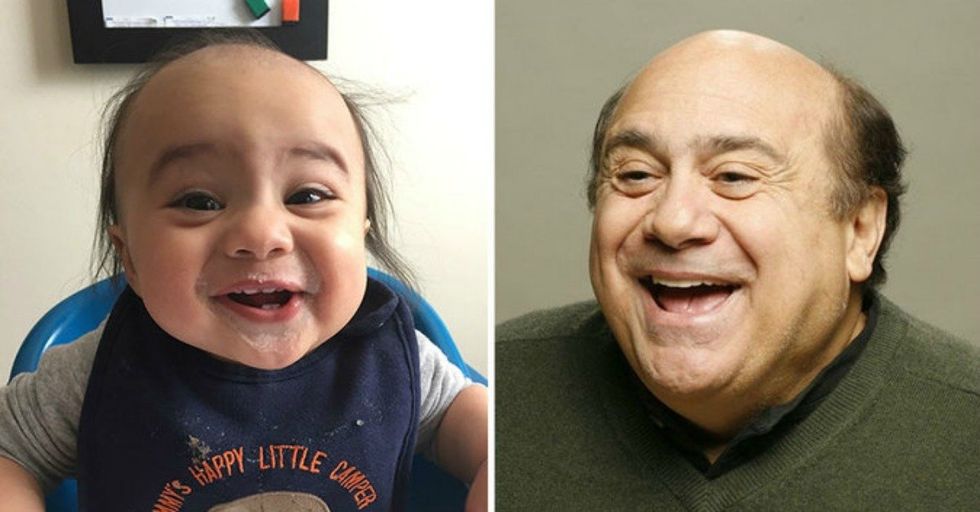 Hilarious Pictures of Babies Who Look EXACTLY Like Celebrities

It's been a rough year. We all need a laugh. Luckily, below, there are pictures of adorable babies who look just like celebrities.

Now, when I say these babies look like specific celebrities, I don't mean if you squint you'll see the resemblance. I'm saying that you might not be able to tell who's the baby and who's Danny DeVito.

So go forth and enjoy.

This baby looks so much like Wallace Shawn it's INCONCEIVABLE*! *You keep using that word. I do not think it means what you think it means.

Does this baby look exactly like Jay-Z OR has Jay-Z started looking more and more like a baby? This is an important question.

If this kid isn't careful, he could end up living in a VAN DOWN BY THE RIVER! Or he could be a Black Sheep. Or a fat guy in a little coat. The possibilities are endless.

The only difference between this baby and Gordon Ramsay is that this baby probably doesn't curse as much. But I don't know this baby personally. He could have a filthy mouth.

Sure, she's got the look down, but can this little girl tap dance and act and sing and have a delicious drink named after her like Shirley Temple?

Eric Stonestreet, or as he's more commonly known, Cam from Modern Family, has always had a baby face, but THIS is ridiculous. Are we sure this isn't just a picture of Stonestreet as a baby?

Everyone knows that Patton Oswalt is one of the best comedians out there today. But the expression on this baby's face is so hilarious and the resemblance is so uncanny that it makes me believe that this baby has a bright future in comedy ahead of him.

On the right, we have Mike "The Situation" Sorrentino from Jersey Shore. On the left, coming in strong, it's "The Minor Situation."

You can tell this baby looks just like Alex Rodriguez because they'll both hypnotize you with their big gorgeous eyes. When you snap out of their beautiful-eye-induced trances, you'll realize the actual A-Rod is probably a liiiiiittle better at baseball than this baby.

All this baby needs to complete the Jack Nicholson package is sunglasses, a cigarette, and court-side seats to every Lakers game.

Ricky Gervais claims that Karl Pilkington has the roundest head in the world. This baby, however, who looks like Karl Pilkington is really giving the guy a run for his money. Or should I say a roll for his money? Because his head is so round. Get it? The baby has a round head. I'm done now.

This baby looks just like Nathan Lane! But that's where the similarity ends. Nathan Lane has an illustrious, decades-long film and stage career. This baby pooped in his diaper three minutes ago.

The haircut: perfect. The beard: looks delicious. The signature Russell Crowe ruffled brow: We'll get there.

What do I have to say about this baby who looks just like Larry the Cable Guy? Git-'er-done! Did I use that right?

This baby looks scarily like Bill Murray from Kingpin.  The hair is too perfect.

A Legend Is Born

This mini Leonardo DiCaprio might not win an Oscar, but then again, we weren't sure that the real Leo would either. Thank goodness for that Revenant bear fight, huh?

Until this baby came along, we all thought Conan O'Brien's famous red locks were one-of-a-kind. While it's definitely a unique look, I would say it works equally well for this baby and for the Irish giant of late night.

Lord of the Diapers

This baby looks just like Ian McKellan as Gandalf the White. That may be the wisest baby I've ever come across.

Real talk: This baby looks like he could be the host of Real Time With Bill Maher.  All he needs is a tiny baby suit. How precious would that be?

Not only does this baby have the Elvis hair and outfit down pat, but he's got the swagger as well! The King is alive and well and doesn't have teeth yet.

This adorable munchkin is practically Alfalfa from The Little Rascals. He's even got a natural cowlick in the back!

Babies who sort of look like Danny DeVito probably aren't that hard to come by — he's a cute little baby-sized man! But this — this is something else. The hair is incredible and the expression is spot-on. This baby is more Danny DeVito's twin than Arnold Schwarzenegger could ever be.

It's In the Eyes

Linda Hunt is a one-of-a-kind character actress you've definitely seen on your TV and in movie theaters. This baby channels her stern look with such alarming accuracy, I wonder if they're actually related.