These Pictures of Siblings Will Make You Laugh | 22 Words 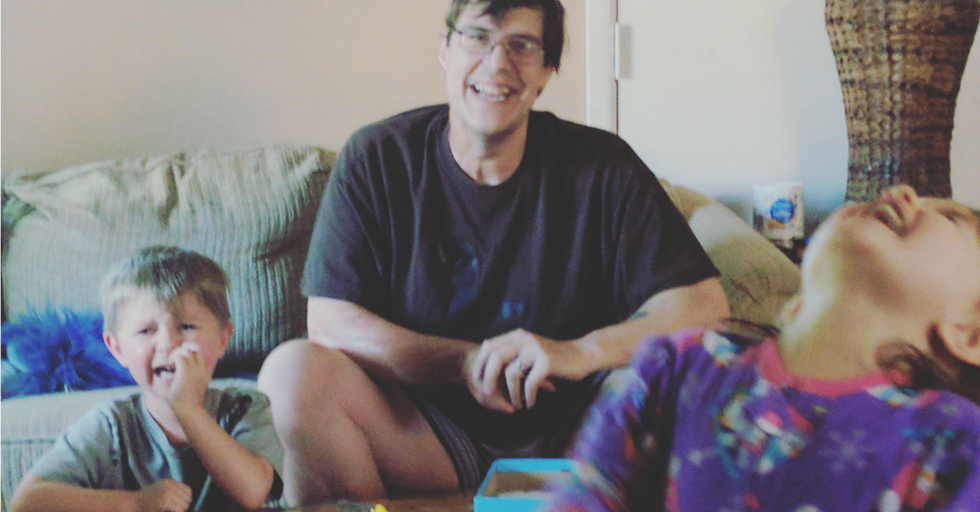 These Pictures of Siblings Will Make You Laugh

The relationship between siblings is ridiculously complex. The order in which you were born plays a huge part in the brother and sister dynamic, and in most instances the day an only child finds out that they're going to have a younger sibling is more so filled with despair and jealousy than excitement and elation. You're no longer the center of your parent's universe, and you can't compete with the newer, shinier version. (Eldest children, you know in your heart that this is true. Youngest children, your parents liked you best. It's a proven fact.)

So how do you accurately explain the loving yet competitive and frustrating dynamic between siblings? While it's hard to put it into words, the following 30 photos say more than words ever could. So take a moment to scroll, laugh, and say to yourself, "I've totally been there." And then get mad about your childhood fights all over again.

This photo looks straight out of a horror movie. On the bright side, now the bride knows her husband-to-be can really rock a bodycon dress.

On one hand, what sex toy company would ever put these types of obvious statements on their packages? On the other, this actually looks pretty legit, so I'm not sure I would be able to tell that this was a fake-out. That UPS driver probably had a good laugh over this delivery.

Sure, this was probably not the most comforting sight to see while in the hospital to have your leg amputated, but hopefully, he had a pretty good sense of humor about it. Plus, who wouldn't want to become a pirate? They're awesome!

Ah, the classic embarrassing airport pickup sign gag. You can just see the judgment of the woman off to the side, even without seeing a disapproving face.

Okay, these guys might win the Worst Sibling award. That's a lot of effort to go to just to make your brother believe he was abandoned in a Bangladeshi garbage can.

Not only did this guy have a wonderful feeling being right and proving his sister wrong, but he also got to use a power washer in the process, which is pretty much the most satisfying tool ever created.

The readiness, the dedication... This photo sums up the sibling dynamic in a nutshell.

As a soon-to-be first-time Mom, this note hits home for me. At least this sister was considerate enough to think about the true sacrifices that come with becoming a Mother.

The realization that you no longer have the sole attention of your parents has got to be a bitter pill to swallow. I wouldn't know since I'm the baby of the family and everyone knows that the youngest child is the favorite.

The joy on this little girl's face juxtaposed with the crushing defeat of her brother is a beautiful thing to behold. And now they have this moment in time captured on film forever.

The sibling relationship is a fine line between love and hate, and this very honest card illustrates that perfectly. I probably sent a nearly identical one to my brother at some point in my life.

My EMT brother got me a very important medical bracelet this year. from funny

No matter what, siblings have your back, and they know what's most important in life. Everyone should nominate one person in their life to do this for them if the worst-case-scenario happens.

At this point, the true horror will come when she finally takes the mask off and her little brother realizes that she's not, in a fact, the comforting wolf creatures he's come to know and love.

"Congratulations! Your graduation gift is the burden of having to find a job that pays a living wage and then being tied to an office until the day you die!"

Let this be a reminder to all of you: The next time your sibling asks you this question, say something good like "VR Headset" or "$500 dollars in cash" so this tragedy doesn't happen to you.

As a currently six-months pregnant woman myself, I see myself in this photo. But if my bother had taken this photo of me I would have insisted on the complete destruction of all evidence of it.

We can all use some motivation to do the things we know we should do but always put off. At least this sibling was trying to help, even if it was in the most obnoxious way possible.

Who would pick going out with your friends over sipping delicious hot cocoa with your favorite brother? I hope this heartbreaking photo was enough to make her see the errors of her ways.

As hilarious as this note is, I must say I don't get the whole "you were adopted" joke. While lots of kids just show up unplanned, adopted kids have the comfort of knowing that their parents definitely wanted them, so wouldn't that actually be a compliment? I'm going to start telling my brother "You weren't adopted" the next time I need a good insult.

Who would look at this amazing fort and be anything other than totally psyched?! That's pro fort building at its finest.

The look on that kid's face is the same face that every youngest child has made at one point in their lives. That Pokémon card collection is pretty impressive, I must say.

I would take it one step further and make my brother attempt to ride it before opening it, thus causing it to completely fall apart underneath him. Does that make me petty?

I'm stone-cold sober at the moment and I laughed at this photo for probably five minutes straight, so the alcohol has nothing to do with how hilarious this is.

This kid looks pretty darn chill about being trapped underneath hundreds of pounds of weights.

How I returned my sister's computer after fixing it. from funny

This is what brothers are for. They help you out when you need it, but don't hesitate to remind you of your own stupidity in the process.

These guys paid a visit to their beloved brother in the hospital after his appendix burst. The love radiating from this photo is seriously heartwarming.

Sure, this is just pointless busy work that will humiliate this kid once he realizes that what he's actually doing, but just look at those bricks sparkle!

The pain of being a younger sibling is all too real. Excuse me a moment while I relive some painful childhood memories...

"Bad parent" or "awesome parent"? You be the judge. Now go call your siblings and tell them all how much you love/hate them.