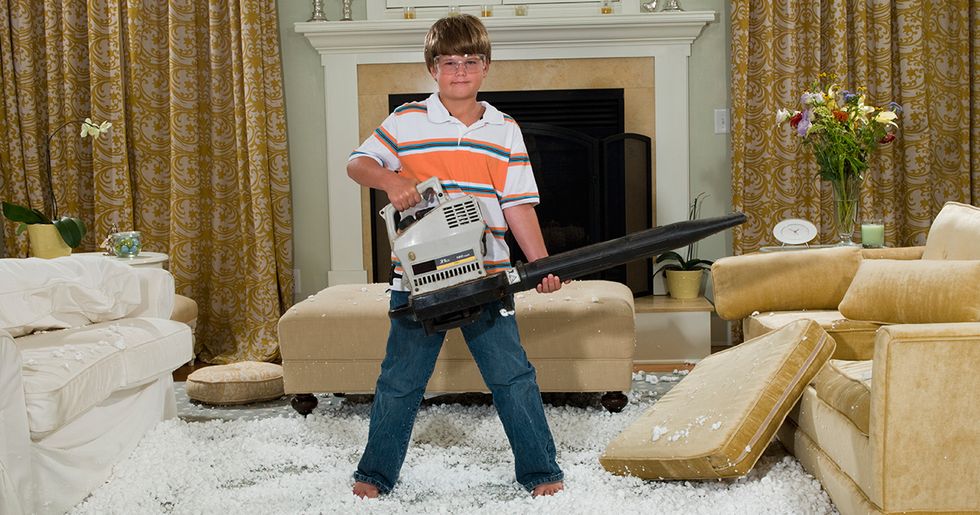 Kids are little genius monsters who love to torture the adults in their lives (but like, in a fun way).

The kids featured in this list should really win awards for their prank prowess.

Pranks are hard to pull off.

As we learned from Winston in New Girl, pranks can be way too small or way too big. Pulling off the perfect prank takes exceptional skill. The 19 kids featured here are prank masters. Seriously, it's a little scary how amazing they are.

This is the perfect prank. Just annoying enough to be really annoying, but not really hurting anyone. Guess you just won't know if you're going to eat beans or corn for a while.

This kid was yelling for his dad in the middle of Lowe's, and then he was found on the top of the very high shelves in the store.

This kid was grounded, so she was made to help power-wash the deck. This is what she did. Brilliant.

Again, perfect level prank. Upside-down water glasses! No way to clean them up without spilling water everywhere. But it's water! Super easy to clean up. The next one is actually genius, and I hope someone took this kid up on it.

This sign was seen in a window of the Children's Hospital in Los Angeles. Someone get that brilliant kid a pizza.

No, but really. The milk is old and chunky.

The caption for this photo reads, "My little niece thought that putting sunglasses and a hat on the end of my boxer's ass would be really funny... She was correct."

Yeah, that's pretty much the face that all kids make when they see their parents kissing or being affectionate with each other in any way.

Yes, the kids are all working together to build a wall of snow over the door to get back into school, but at least they're working together, right? The next one is maybe my favorite thing in the world.

This little girl is my hero. Do people think she works there? Or that she's crazy? Either way, she's won.

This kid walked up to his older cousin and said he got new earrings. Little boys are the weirdest.

That is bold, Joshua. I hope it's a joke and that he served his mom breakfast in bed immediately after giving this to her.

Oh, so this is what all those questions were about. The kid kept asking his dad, "Do you need to go to the bathroom?"

When you say, "whatever lol," you get a ladle for your birthday. Probably the one from your drawer in the kitchen. The next one is a total classic.

He went from row to row taking silly pictures of himself on the store computers. He deserves a medal.

The caption reads, "Turned 40 today. My kids greeted me with this tragedy on my front porch..."

I think she's cuter now that I know she introduced herself as Buttcrack to a stranger. She gets it.

This dad ran up the stairs after his three-year-old yelled, "Dada! There's a sea of water on the counter!" I bet he was annoyed but also really relieved when he saw this.

Get it? Dumble-door! Share this with someone who has a brilliant prankster of their own!