Hilarious Signs That'll Make You Do a Double Take | 22 Words 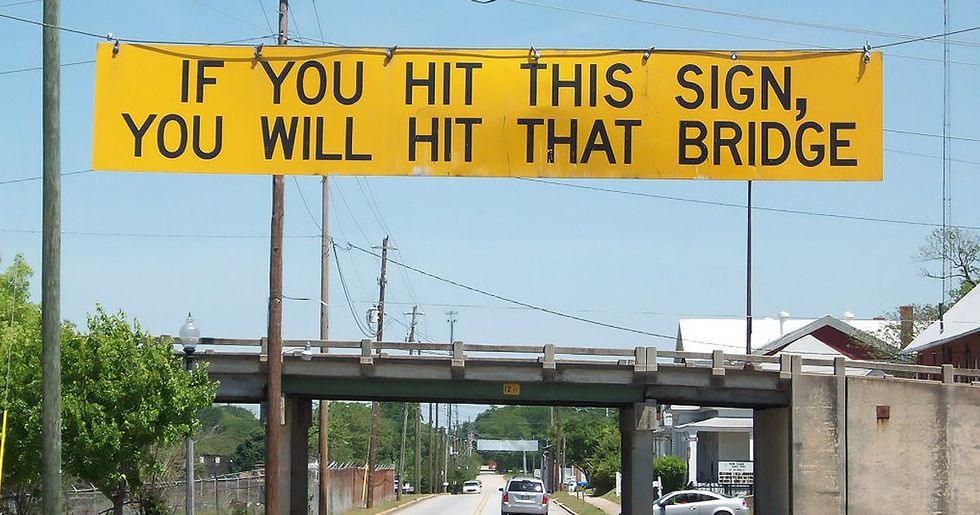 Hilarious Signs That'll Make You Do a Double Take

I don't know about you, but I love a good old-fashioned road trip. Maybe it's because I grew up in the Midwest, where many people would rather drive 20 hours to get to their destination than take a 2-hour flight, but packing for a road trip is one of my favorite things to do. Obviously, you have to have ample snacks and beverages, books, games, and fully charged Nintendo Switch. Maybe a couple of audiobooks and/or podcasts...yep! I can already hear the call of the open road.

One of the most entertaining parts of a road trip (aside from stopping at Cracker Barrell, obvs) is all the funny signs you pass along the highway. In the Midwest, it's not uncommon to see a bunch of signs saying stuff like "Pray for America" just a few yards down from a gigantic billboard for an adult toy store. In California, you'd be surprised how many billboards there are about STDs!

And if you're really lucky, you might see one of the hilarious signs shown here.

This message is as cold as the delicious dairy treats served at Dairy Queen. Stop in today and get a Blizzard or a Dilly Bar! (It looks like this particular location may be hiring soon. I'm just trying to put my best food forward.)

Who are we fighting?

I don't know a whole lot about diabetes, but I am pretty certain that fighting children who have the disease is not the ideal way to treat it.

If only someone had explicitly told me this the first time I went skiing. Things could have ended much less painfully. For me. (The tree was fine.)

And if it doesn't suck, we'll make it suck!

Some of the cars are even free! (Except for the ones that are not free.)

I think the fact that most of us have to work away from our dogs is one of the cruelest facts about the world. It just isn't fair.

The hero we need.

I think Instagram Stories definitely set us back a few years in the fight against vertical video. We need people like this now more than ever.

Maybe this is exactly what they wanted the finished product to look like. Maybe they didn't give up at all!

Did you know this about Venus fly traps? I didn't! The best part of this sign is easily the message to flies at the bottom, though.

I don't know what happened to Joe...and I'm not sure I want to know.

At least if you accidentally push the door, you can pretend it was on purpose because you wanted to look silly.

I don't blame you guys one bit. Frankly, I'm surprised you allowed it even once.

This sign in particular has displayed tons of different puns over the past 30 years. I don't know who's in charge of changing the display, but I think they could potentially be my new best friend.

I assume this is actually rather hurtful to any trains who actually can read. I hope they know to stay on the tracks.

Why have I never considered this before? It's not like life is closing a door and then locking it forever or turning it into a permanent wall.

Imagine traveling from your home to whatever event this is (I'm gonna guess a wrestling show) only to find out that you were seated directly behind this sign.

We'll do it later.

Are librarians funny? Or are they the funniest people on the planet? I can't decide.

I just know that my dog would say he'd vouch for me, and then leave me high and dry at the last second as some kind of prank.

Do not try this at home, kids. Actually, don't try it anywhere.

Comic Sans in a Fortun 500 company? Come on, folks. Next, you're gonna try Papyrus, aren't you?

You should always read the signs around you. They might just keep you safe. Not to mention the fact that they might make you laugh!

What else does Mayo do?

You can't deny having seen that sign. It's gigantic and covered in text.

I love this one.

This is the kind of low-level trolling that brings me so much joy. Don't you just love humans?

I will also accept them in pancakes. Or waffles.

Is there really such a thing as "too many fries?" I think not.

You get the idea.

I don't need a poem to tell me there's a good deal on electronics. But I will accept one!

If I'm being honest, I think whoever chose to name this street "Horneytown" must have had some idea of what they were doing.

It's a tough one!

At the end of the day, that's exactly what a yard sale is. In fact, that's kind of what shopping for anything is. Share this with someone who could use an extra laugh today!