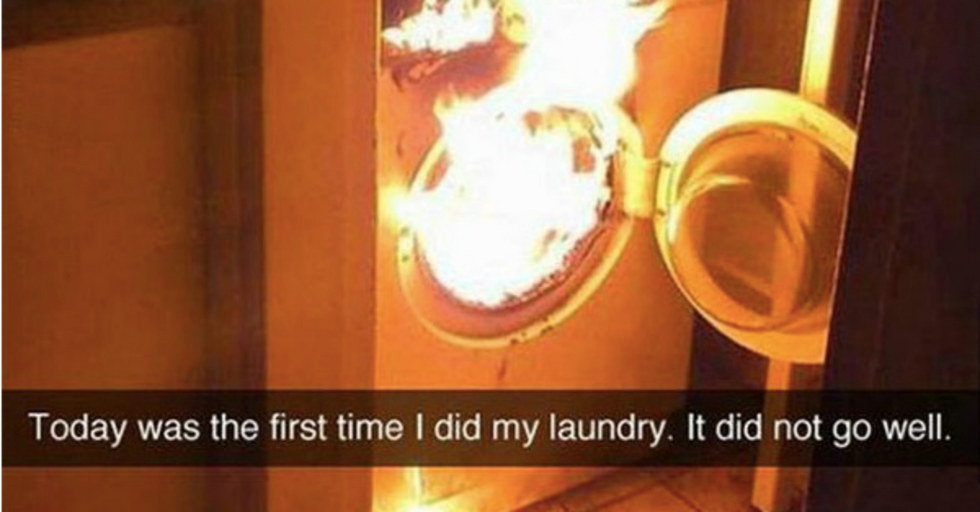 30 Hilarious Snapchat Fails That Prove Your Day Could Be Much, Much Worse

Snapchat is a great way to show your friends what shenanigans you're up to. The filters are super silly and can provide hours upon hours of entertainment.

But every so often, Snapchat captures something more sinister than your sister looking like a baby deer. Sometimes, something goes very wrong on Snapchat or in the universe, and someone snaps it for the world to see.

You'll cringe at these epic Snapchat fails. You'll laugh nervously and you'll hurt inside. But one thing you won't be able to do is look away.

Should I Tell Him?

When I tell you that this snap had me in tears because I was laughing so hard, I wish I was lying. I was only laughing because that dog is totally fine. He just wanted to go for a dip!

"LOL. Snap caught me so desperately alone." No joke, though, his footwork is super impressive.

There Was a Bee

The saddest part about this bee freakout is that this woman lost her taco. If it was a salad, or a peanut butter and jelly sandwich, that would be one thing. But a taco... So sad.

This one's on Marc. He was not specific about where the "c" was supposed to go.

TFW Snapchat thinks your nostrils are your eyeballs. This was not a good day for Sarah's self-esteem.

The pun gets an A+. The situation is pretty awful, though. This snap is really pert-herb-ing.

When she's an old woman on her deathbed, her family will lean over to her one final time and ask, "Do you have any regrets?" "Just one," she'll reply. "Teaching my father how to use Snapchat."

This is a totally natural look... ...if you're related to Maleficent.

Ironically, this screenshot was taken by the one person who decided following Rand Paul on Snapchat was a good idea. ...It was Jeb Bush.

We've all gotten caught trying to sneakily take a picture of someone. Leaving the flash on is a real amateur move. I'll bet she never makes this mistake again.

If the thing he's trying to do is be a terrifying fruit beast that will haunt our nightmares forever, then he's doing a great job. If it's something else, then oh yeah, he's doing it way wrong.

Someone read the diary where I keep all of my deepest, wildest dreams. Tell me you've never wanted to be a cookie. Go on, tell me. Yeah, I thought so.

Kendall Jenner is perfect, you say? Kendall Jenner can do no wrong, you claim? Well, I submit this snap as Exhibit A. She has four eyes! ...Wait. Does that make her flawed or superhuman?

The grown man with a baby for a nose is kind of adorable. On the other hand, the baby with a nose for a face is a demon straight from the depths of hell.

This is the face I make anytime one of my meals gets ruined. Food = love. That's the lesson of this story.

Almost nothing is worse than losing your ice cream when it's a normal-sized cone. I can't imagine the heartbreak in this situation. R.I.P. giant ice cream cone. You will be missed.

Oh, the plight of the middle school teacher. She's never going to live that down. She's "Ms. Orgasm" for life now.

If I was a piece of rotini trying to hide in a box of penne, you best believe I wouldn't be hanging out in the window. That's how you get caught!

The Face of Disaster

You may think this is a face swap gone awry, but you'd be wrong. It's actually a pair of twins but one twin has a face on top of another face. She's a modern medical miracle.

OK, this is a sad one. As someone who's always just half a head poking through the crowd or whose knee is the only part of me that makes it into the picture, I empathize.

Yes, this is terrible, but it could have been much worse. At least the car has leather seats.

The Mufasa of Dads

Odd choice of father/son pair for this advertisement. I suppose they really wanted to get across the sense of urgency.

I really hope the amount of effort this took was worth it. P.S. Can you believe the stars seemed to spell out "send nudes?" P.P.S. I KNOW THEY DON'T ACTUALLY. IT'S A JOKE.

Someone was really bored at work. What else are you supposed to do in the breakroom while the coffee brews?

Now, this may be a little difficult for you to understand. When a man loves an oven...

This woman fought a BBQ battle with her grill in an entire Snapchat saga. It's hilarious even though it may have set women back a few years.

This person may not have tricked his Snapchat audience, but he tricked himself, and that's what really matters. That, and passing school...

Ohhh that's what he did wrong. He tried to wash his fireball.