30 Text Messages Between Sisters That Are Hilarious | 22 Words 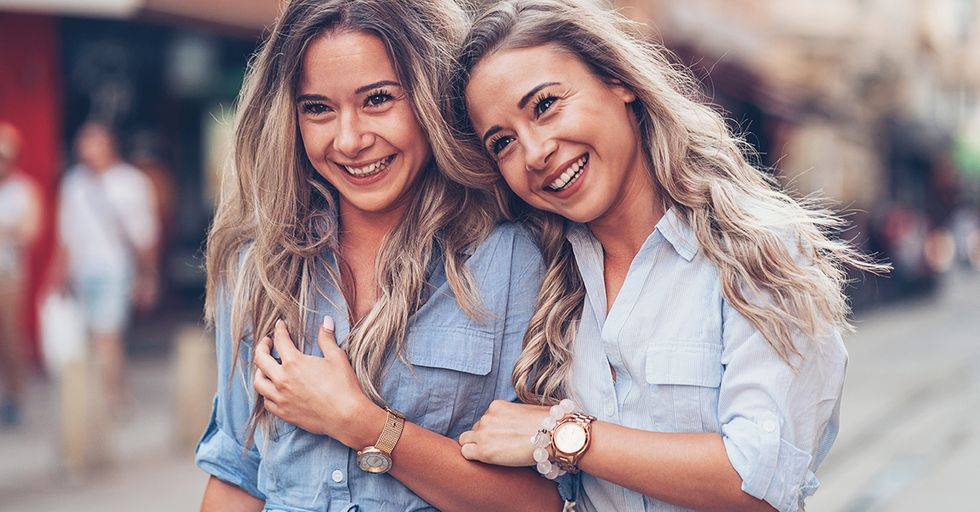 30 Text Messages Between Sisters That Are Hilarious

The nice things about having a sister outweigh the things that might make you nervous. You love the inside jokes, you love the way you have a similar sense of humor, and you love that you always have each other’s backs. When life gets too tough, and when parents are too much to deal with, at least having a sister by your side makes it a little bit easier.

Of course, it is not all fun and games, but let's focus on the positives, shall we? Here are some hilarious and relatable messages that only sisters will understand (and might have even sent themselves).

We all know that sisters have a tendency to argue about literally everything. And worse than the arguments is trying to figure out who is right and who is not.

Sisters have a lot of problems, and sometimes trying to decide what kind of food they want to eat for dinner is what they are worried about! It makes sense, it is some very serious stuff.

Sisters are used to hearing all the gossip, and that includes every little detail about their love life. So some sisters might be a little unsurprised to see a new love interest every week.

Memes come with a price. That price? Being sucked into the void and never finding your way out. Memes become part of the battle in who is funnier.

Always There For Each Other

Sometimes sisters have to go above and beyond for their other half. They have to make the long drive and deal with a drunk sibling. At least it makes for an amusing story.

We have all had times where we just can't sleep, so we text our sister who is a room away. Sometimes the conversation gets deep really quick, but sometimes it just doesn't.

A sister will always be there for you, even when you come up with some ideas that are less than perfect. But at least they are always willing to listen to your plan first.

Sisters are more willing to tell each other things than there parents, which is definitely the case in this conversation. Luckily, sisters are always there for each other and willing to get each other out of serious situations.

Sometimes it is really hard to sleep! We mentioned it before! And so a sister looks for some comfort, but sometimes, the sibling in the other room just has no time for you whatsoever. It happens.

It is very important to look out for one another, especially in concerns of potential lifemates. So sisters always have each other's backs for that, and they make sure they keep each other updated.

There is a fine line between love and hate, we all know that. And sometimes sisters know that line better than anyone, and they are not afraid to let their sibling know it.

Sharing memes during school is sometimes the only thing that gets us through the day. So when scrolling through Instagram, chances are, sisters are sending each other hilarious memes.

It's important for sisters to be sarcastic with each other. After all, that is how they show their love! So it makes sense for them to clap back with these quick remarks.

Sometimes They Are Really Loving

While sisters may argue more often than not, they can also be super loving. Every once and a while a sister will show unexpected kindness, and really, that's the best part of having a sister.

People might think that putting their sister down as an emergency contact makes sense, but as it turns out, that is not always the case. Or, even if it is, sisters will not waste time turning it into something hilarious.

No Matter How Weird

Everyone needs someone who will help them with the things they are sometimes too embarrassed to even talk about. That's what sisters are for! The beautiful thing about them is that they will always want to be there for all the weird stuff you do.

Sometimes no matter how much you bribe a sister, she is not willing to budge for you. But she is definitely willing to show you she read your text, and will leave you hanging.

Every once and a while, sisters will make sure you know just how much they love and appreciate you. Between all the fighting, it is important to show, since everyone wants to hear how much they are loved.

There are many instances in which sisters will share way more than they should, but that is not a surprise. There are little to no boundaries between sisters, and messages like this prove it.

It is important to keep tabs on your siblings, and always make sure they will stay safe. When they are traveling overseas, make sure they packed the essentials, and then leave them with a few life tips!

Sisters are not above resorting to bribery, because sometimes their sibling is the one person who will fall for some petty cash, or in this case some good old chicken nuggets.

Thinking Of The Future

It is important to think about what the future holds in store for you, even if sometimes that means it is at the expense of your sibling. Sisters have to look out for themselves sometimes!

When They Can't Agree

Cats or dogs? It's the age-old question that many people still cannot decide between. Even amongst siblings, the choice is hard to make! And it especially sucks when one of them wants a furry friend.

When a sister gets married, there are very few people she can talk to. Her husband is probably not on the list since men don't always know what to do. Luckily, sisters are perfect to rant to.

Sometimes, when deciding upon a career, you look for guidance. For some, they go see a counselor, but for others, they shoot out ideas to their siblings. And thankfully, their siblings are supportive.

Luckily, your sister is just as into your self-deprecating jokes as you are. She will not only play along, but she is probably seriously laughing on the other side of the phone. At least she might try to make you feel better!

Sisters never say yes right away. They have to test your loyalty and willingness for every single thing. Even for shopping, which is one of the most important things of all.

Sometimes there are photos and memes that not even your sister will understand, but that is okay. She will always reply to you, so at least you aren't talking to the wall.

The boy-talk never stops between sisters, especially since there is so much to say about them. Whether good or bad, chances are your sister can relate because she is going through, or has gone through, the same thing.

The first day of anything is hard--classes, dates, jobs. So when you feel a little weird, it is nice to send your sister a text message. She might think you are weird too, but at least she'll make you feel okay about it.