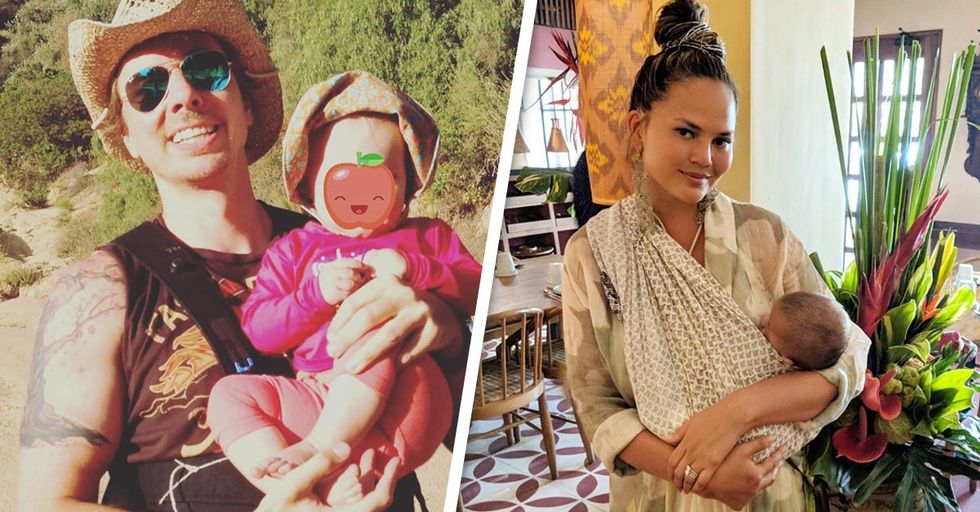 Hilarious Tweets From Celebrity Parents That Prove They Struggle Too

Look, you can have all the fame and fortune in the land. Kids still puke and spit up and poop in their diapers. No amount of money is going to save you from temper tantrums. Your kid will be able to destroy your house and draw on your walls no matter how big it is. Just because you are famous does not mean that parenting is any easier for you. Celebrities might have the luxury of more outside help, but they are still parents who are constantly perplexed and exhausted by their small children.

Luckily, Twitter exists, and many of these famous parents love sharing their parenting trials and tribulations, probably for the same reason everyone else does: to feel less alone. They may be celebrities, but they are just as burdened as any other parent. And they are ready to share their struggles, triumphs, and other hilarious parenting moments they experience.

Kids need a lot of direction. They don't know anything when they're born. You have to teach them the ways of the world. And in return, they'll make you sleep-deprived and miserable. At least temporarily.

Chrissy Teigen is one celeb parent who gets really real about her parenting life. Does this sound familiar to any parents out there?

If I'm being rigorously honest, the amount of time I spend on the toilet has doubled since having kids.
— dax shepard (@dax shepard)1527986469.0

Leave it to Dax Shepard to bring radical honesty about parenting to the people. Raise your hand if you are also a parent who hides in the bathroom a lot.

The look on Lin-Manuel Miranda's face is one of a father who has been doing the same simple activity for hours with no end in sight.

Sometimes all you need to get through the day as a parent is a little solidarity with other people who are having a rough go of it.

My daughter & I accidentally busted in on my husband in the bathroom & he got mad which is funny since I HAVEN'T PEED ALONE IN 7 YEARS.
— Busy Philipps (@Busy Philipps)1449614436.0

When you are a parent, you can pretty much forget about privacy when you go to the bathroom.

Here's a lesson to all the parents out there: The kid will always want to play with the thing that took no time for you to construct.

Potty training is super tough, and it's not a straight trajectory... It's more like a roller coaster, with ups and downs and twists and turns.

I’d like to change the superpower I would like to have to the ability to clean up my house faster than my kids can mess it up. Thank you.
— alyson hannigan (@alyson hannigan)1413652435.0

To clean faster than the kids make it dirty would be a great superpower. Even if it's just a split second faster.

Ryan Reynolds is one of the funniest famous parents on the Internet. Kids really demand a lot of their parents.

It just occurred to me that the majority of my diet is made up of the foods that my kid didn't finish...
— Carrie Underwood (@Carrie Underwood)1462034176.0

Shoutout to adult human beings who have to eat half-chewed sandwiches and soggy crackers instead of real food now that they have kids.

If you are a parent of a toddler, you, like Nicole Richie, probably know that every day is full of fights. Fights about things you didn't even know you could fight about.

Cardi B must be the coolest mom in the universe. And if her kid will be anything like her, she probably is saying "PARTY PARTY PARTY!"

If you are a parent of small children, you are probably familiar with the phenomenon that is Paw Patrol. So, sorry about that.

Parents of the year award haha! River locked herself in her room via the connecting door. She loves to shut doors! https://t.co/9MhZNfO9My
— Kelly Clarkson (@Kelly Clarkson)1456366063.0

Look at River's little face! It's saying, "I don't know if I should be doing this but I'm doing it anyway bye mom!"

It's hilarious that Catherine thought she could maintain a skincare routine while having a small child in the first place. Love the optimism!

My three year old decided to start "our" day at 530AM, and if a child-friendly version existed, I would have definitely tranq-darted her.
— dax shepard (@dax shepard)1538076011.0

Dax getting real about what he would do to his kid if he would. 5:30 a.m. is way too early. He's right about that.

My daughter just sneezed into my yawning mouth. Seemed really fucking pleased with herself. Joke's on her. She'll have to bury me someday.
— Ryan Reynolds (@Ryan Reynolds)1460815732.0

Ryan Reynolds reminds us that ultimately every parent will get revenge on their child by becoming old and helpless and reliant on them.

#ReposThis is what it looks like when a little tyrant fairy artist holds you down and makes your face look “better”. https://t.co/LfyfrGJ5Tc
— Channing Tatum (@Channing Tatum)1521426263.0

Channing Tatum and Jenna Dewan were very patient while their kid painted their faces. I, a person who hates face paint, would not have enjoyed this.

Every parent has to eventually face the possibility that their kid might surpass them. To be honest, I would listen to this song. I really relate to its message.

I told Luna to “stop it” ONCE, months ago and now when she’s doing something she knows is wrong she screams DONT TE… https://t.co/nlkRq4fQHn
— chrissy teigen (@chrissy teigen)1543857211.0

Kids are like elephants. They never forget anything you say, ever, unless it has to do with getting dressed or cleaning their room.

So my baby is now making phone calls. She picks up the phone somehow gets to dialing and puts the phone to her ear.… https://t.co/jYPMnskr8X
— Serena Williams (@Serena Williams)1549116512.0

Kids these days are technologically savvy before they can sit up. Pretty soon, you'll have to stop giving your kid the phone to play with because they'll start calling people.

Oh no. I didn't know pregnancy insomnia was a thing. Why is this a thing? It's so not fair!

Um, this is hilarious and perfect and I would expect nothing less from Pink's super cool children.

Being a father is the single greatest feeling on earth. Not including those wonderful years I spent without a child, of course.
— Ryan Reynolds (@Ryan Reynolds)1469199041.0

Being a parent is the most meaningful thing you can do...once you have kids. Before that, you can pretty much do whatever you want.

This is precious. He didn't specify what family he got her a picture of. What? That looks like a very nice family.

Sometimes kids really impress you with the creative ways they invent to not follow your instructions. This is a good one.

I can honestly say I love my children more now that they’ve discovered the movie Elf.
— olivia wilde (@olivia wilde)1543943065.0

Elf is so good it makes me want to have kids solely so I can show it to them. I don't know what I'd do if my kids didn't love this movie.

It happens even to the best of us (Christina Applegate). Share this with a parent you know!