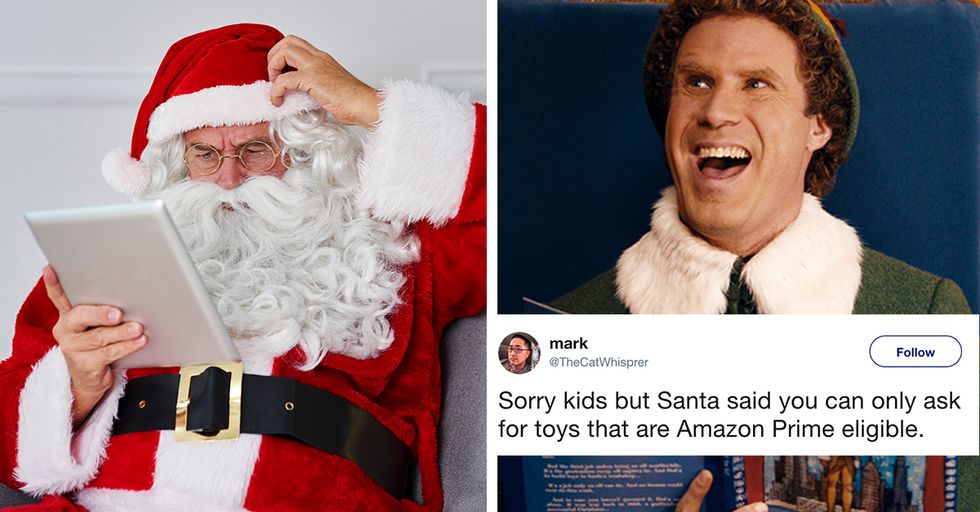 The holidays can be full of lights, presents, coziness, and family– and if you are a parent, they can also be filled to the brim with untold amounts of stress. Sorry, that's just the way it is. And the parents who wrote these tweets agree that the holiday season isn't all smiles and rainbows– especially if you have small children.

Kids are very demanding, and the holidays is a tricky balance between being generous with gifts, and not giving in to those crazy monsters' every whim. It's hard to be a parent during the holidays. In fact, it's so hard that the first two weeks of the new year should always be reserved for parents to go on a tropical vacation someplace very far away from their kids.

If Arnold Schwarzenegger couldn't handle being a parent during Christmas, then most other parents can't either.

And that's OK! Because parents during the holidays have each other to commiserate with– and Twitter to use as an outlet.

*Gestures to all of it*

Wouldn't it be nice if the cashier at the mall could stop all of the craziness? Sadly, they are not superheroes (are least not in that way).

Believe in the magic of Christmas, I whisper to myself as I check the balance in my account.
— Simon Holland (@Simon Holland)1512393509.0

Nothing gets hit harder at Christmas than a parent's bank account. Not even those ski towns in Colorado that get several feet of snow.

The children were nestled

The children were nestled all snug in their beds until they had to pee get a drink show me they can whistle and ask me if birds have teeth.
— MamaFizzles (@MamaFizzles)1482209663.0

What? Serious question, though. Do birds have teeth?

I grew up Jewish, so my parents didn't have the burden of lying to me about the big red man when I was little, and honestly, I prefer it that way. It can't be easy.

This kid is too smart for their own good. I'd buy this kid all the coal they wanted. It would keep them busy for hours.

Neighbor asked my kid the top 3 gifts she wants from Santa. Would've been nice if she put them on her list A TINY BIT SOONER THAN XMAS EVE.
— Kim Bongiorno (@Kim Bongiorno)1482618296.0

Kids have no idea that money doesn't grow on trees and that parents don't have a limited supply of it. The awakening is always miraculous.

Just found some stocking stuffers that Santa forgot last year. Awesome. I've never been so far ahead in my Christmas shopping this early.
— Momma of Midgard (@Momma of Midgard)1380925153.0

Wow, thank goodness for forgetful past you! This is the best gift a parent could themselves.

All I Want for Christmas

This six-year-old really has a point. I've never thought about this before, but now I will always think about it when I hear this song.

"Target cashier?" Oh, you mean my best friend Terry? The lovely mom of four rambunctious kids who likes hiking and golfing in her spare time?

Have kids so you can be done with your Christmas shopping & they can hand you their "updated" list which includes nothing you bought.
— Sarcastic Mommy (@Sarcastic Mommy)1513654967.0

If I have learned anything from this list of tweets, it is that I will never officially recognize any "list" of presents any of my children ever write. No lists. Lists are bad.

I really hate holiday newsletters, but if they all read like this, I would love them. Brutal honesty for the win.

Went online to get the kids' Christmas gifts and long story short an hour later all I ordered was a really funny Supernatural mug for myself
— Kim Bongiorno (@Kim Bongiorno)1449371406.0

Online shopping or shopping of any kind for Christmas gifts is harrowing because five minutes in, I'm convinced I'm putting in so much effort that I deserve to buy myself a gift.

Oh my goodness I have never thought about this part of parenting before. This has me rethinking everything.

No joke, I hid a present today and then panicked that I forgot where I put it. Literal hours later. The struggle is real.

My teenager asked for a $400 gaming system for Christmas, so guess who's waking up Christmas morning with a stockin… https://t.co/F5UEUr3yef
— KarateAndPopTarts (@KarateAndPopTarts)1513616551.0

Once you're a teenager, you work for those beyond expensive gifts! It's called living in the real world, bucko.

Chill and laid back

Think you are chill and laid back? Watch your kid build and decorate a gingerbread house without intervening.
— Simon Holland (@Simon Holland)1512305425.0

Well, I officially can never ever do this because I thought about it for five seconds and I nearly screamed my head off.

One minute of sleep

If only. But on Christmas, all parents are Santa, and Santa never sleeps (until December 26, that is).

This kid. This kid will go very far in life.

I tried to put together an IKEA dresser one time, and that was enough for me. Someone else will have to figure out the toys.

This is the only way that Santa can ensure that they will arrive by Christmas. Sorry, but Santa lives in the 21st century with all of us now.

Elf on the Shelf

As a Jewish person, I never quite understood the Elf on the Shelf. I definitely never understood all the effort parents go through for this evil looking elf.

This is a good point. They also clearly never had a pet.

Small children are like cats. They like the container the toy comes in more than the toy. Always.

You know it's a cheap Advent calendar when a three year old spits out the chocolate.
— dadpression (@dadpression)1512183512.0

Want proof that we're living in the apocalypse? Look no further than capitalist space Santa.

The most challenging part of Christmas is staying up later than my kids to put the presents out.
— Rodney Lacroix (@Rodney Lacroix)1512050059.0

This is when I give up as a parent. They can get their presents in the morning when I wake up and not a minute before.

Christmas break isn't so bad since the sound of your kids fighting over their new toys is drowned out by the vacuum sucking up pine needles.
— the Mom TruthBomb (@the Mom TruthBomb)1482353730.0

This about sums it up. Share this with a fellow parent in the trenches this holiday season!