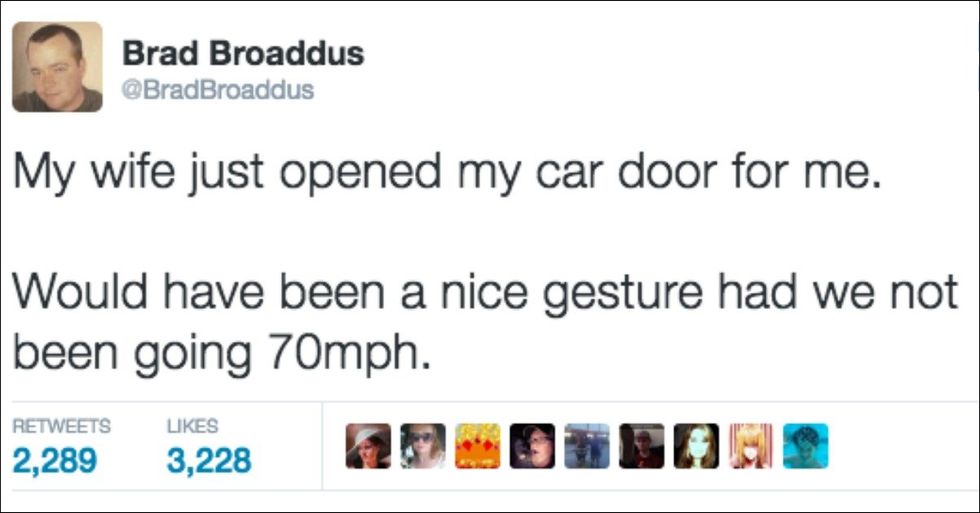 Marriage is that blissful union of two people who promise to love each other until the end of time, or the end of the toilet paper roll that someone didn't replace.

Because Twitter is cheaper than therapy — and much more entertaining — many people tweet out relationship gems that often paint a hilariously honest picture of wedded bliss.

For better or worse, in sickness and in health, as long as they both shall tweet...

Fore! It appears it was the wife, with the Tupperware lid, in the kitchen.

May the Force be with you. Don't go to the dark side.

And the food isn't nearly as good. Smart call.

That depends on the show. If it’s a really good one, I would say five minutes max.

And that using five paper towels to wipe out a Ziploc bag probably isn’t that smart. Recycling is hard.

And for those who are wondering, her name is Febee. She’s adorable.

It is kind of hard to talk with all that candy in your mouth. But maturity is overrated.

Want to Taco 'Bout It?

Well, as long as you're going... Maybe just a light snack.

You wouldn't expect him to show up in just an average collar for the big day, now would you? I think not.

No matter where you go, no matter what you do… She will find you and put you to work.

Grin and Bear It

But the important question is if he remembered the milk, eggs, and bread.

Well, maybe if you started suggesting things like Netflix and power walks to the fridge we wouldn't have this problem.

It's good to establish a baseline... ...apparently.

Who doesn't love a good pun? I think we found that person.

If you're looking for all of the mugs, maybe try the front lawn? Then again, if you want something done right...

A Round of Applause!

It’s actually quite a performance. Everyone loves a hero!

Just a little slip of the foot and suddenly you’re able to buy name brand tin foil instead of the generic. Hypothetically speaking, of course.

Your call. Anyway, send a postcard!

And my glare can burn you with the heat of a 1,000 flaming bodies in the solar system?

I Feel Your Pain

He acts tough, but you know he’s just a big softie. Plus, who doesn’t love kittens?

It's the Little Things

Awww, it so cute how he snores. *five years later* Maybe a pillow would help muffle the noise…

Cry Me a River

*Mother-in-law hands him back* “He’s your problem now."

*Sees wife putting away folded laundry* So, do you need help folding laundry?

A man cold is like a regular cold except it includes extreme fatigue from telling everyone that you have a cold.

The Key to Success

What are these crazy metal things? Wait! There’s a note. Thanks for the help!

Well, that kind of kills the mood. Then again, maybe he has a plan...

The key is to leave them wanting more. In other words, don’t ever let them know how much more you could be doing.

And you always need something from the store... ...that you'll probably forget and have to go back to the store for at least two more times that week.

Let's remember you're half responsible for those wonderful, charming, super-cool kids there yourself there, buddy.

Do a Little Dance

What a surprise! But as long as you're home, care to hand jive, baby?

Don't be alarmed... Actually, yes, if we're out of snacks, be alarmed.

Forget five years. Where have you been for the past five hours? Pick up some milk on your way home.

The Good and the Bad

The final result? About 72 degrees when he’s home. When he’s gone? All bets are off — and the heat is on.

He Said, She Said

It’s really two-way communication. She says something and you communicate by a series of nods and smiles.

Who says romance is dead? It's not if the dude has a coupon.

Netflix and dental gear? And if you’re lucky, the good sweatpants and fancy new T-shirt.

But that just means there's more of you to love, right? Right?!?

It's a toss-up. Either way somebody loses.

Who says chivalry is dead? Don't get caught up in the details...