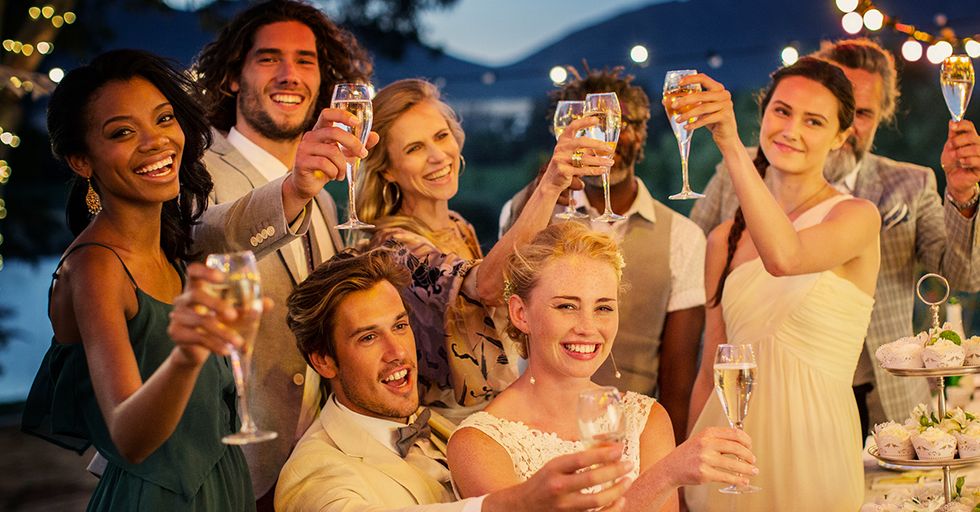 It's wedding season, folks, so you know what that means!

If you attend a lot of weddings, you know exactly what goes down at these shindigs.

You know that no matter how fun it is, it's also kind of a pain! So here are 19 wedding tweets to get you through this brutal wedding season.

When you're telling your bridal party or groomsmen what to wear, be specific! I can't stress this enough.

Finding the perfect venue for your big day is really hard. Then, things like this happen, and you think you'll never find the right place.

Honestly, this is more romantic than almost any other wedding vows I've ever heard. If someone lets you have one of their fries, you know that love is forever.

This is a good start. Now scratch that and start again. The next one is perfectly punny.

Get it?! The cake was in tiers!

Now I really want a nacho cheese fountain at my wedding. Like, for real. Like, I'm going to google it right now and see if I can make it happen.

It could also be a fairy tale wedding if you wear a red-hooded dress and get eaten by a wolf, but I think we're talking about a different sort of fairy tale.

The perfect wedding would be one that has phone charging stations around the entire venue. You need something to look at during the ceremony.

Honestly, before I can tell you if I can come to your wedding, you need to tell me that there is WiFi and an open bar. Those are the two criteria. The next one is pretty hilarious.

No one knew where they were supposed to sit, but John really killed it on the dance floor.

The problem is that some of them might show up, and then what will you do? This is a risk I'm not willing to take.

I do not think this will ruin the wedding. In fact, I think it will enhance it very much.

Look, I love a good rustic wedding, but the Pinterest people are taking it too far. Get those trees off my plate, people! The next one is something I would definitely do.

"Oh, shoot! He couldn't make it. I guess I'll have the steak AND the fish!"

Please just use a normal font on your wedding invitations. I want to know when to show up.

I don't see this ending well, but I would love to be in the audience for this toast. Every wedding needs a dose of drama.

Again, be specific when you talk about your future together. I think IKEA trips are pretty much assumed when you get married.

How about every photo ever? This is what happens whenever there's a photo taken of me, I swear. Share this with your +1 for this wedding season!