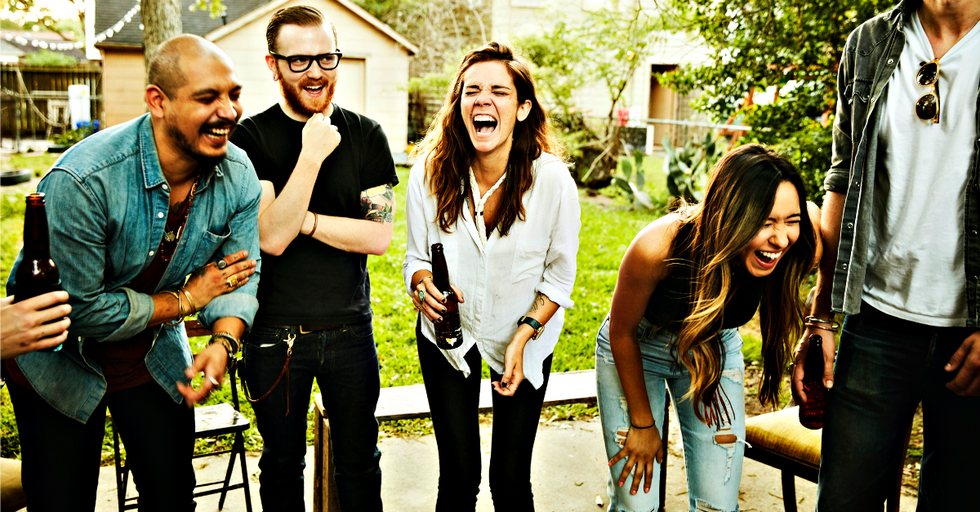 19 Tweets That Are So Funny But Also a Little Offensive

But some jokes on that website toe the line between decent and...well, totally offensive.

You will laugh at these tweets, that's for sure.

But afterward, you might feel bad about it. A little bit. Un poquito guilty, if you will.

Oh no. We've been laughing in their faces this whole time. Just what we needed these days...more bad news.

No joke that would be the most terrifying thing in the world. This is why you always sit in the way back for funerals.

This is so wrong. Everyone knows that when you're throwing babies into cribs, you need to aim for a swish. Nothing off the backboard.

Get it? Because it's white? The next one might depress you if you're single.

Oh man, an accidental cremation would probably not do much to repair the relationship that put his son in therapy to begin with.

See, here's the thing: You can't decide to not have kids after you have them. It doesn't quite work like that.

Listen, imposter syndrome is real. And it is irrational.

Yes, if I were a kid, I would freak out and hate this, but as a future parent, I'm totally stealing this move. The next one is also for the parents in the crowd.

Darn. Mom thought she found a loophole in the laws of the land. Alas, I guess you have to take care of your own crying baby on a plane.

The thing about owls

Well, this tweet didn't end how we expected it to. (No owls were harmed in the making of this tweet.)

Some of us cry while chopping onions for very personal reasons. This just goes to show you that you never know what a person has been through.

Get it? Because parrots, well, parrot your words? Hilarious.

This is so true, and it's also true that no one unpacks their luggage immediately. You do the math. The next one is truly hilariously cruel.

How many parents have had a perverse fantasy of just leaving when their kid was running around like a maniac?

This woman knows what's up. Pineapple on pizza is an atrocity, and you should be banished from Earth if you approve of it. Sincerely, A New Yorker

Hey, if he's doing the AA thing, that does mean, presumably, that he's not drinking anymore. But then again, if he's announcing it over the speakers...

This is so true. If you try to absorb your twin into your body after you've both been born into separate bodies, it's not going to end well for either of you. Share this with someone who could use a laugh!