Hilarious and Vaguely Unsettling Images That Will Make You Say 'Thanks, I Hate It' | 22 Words 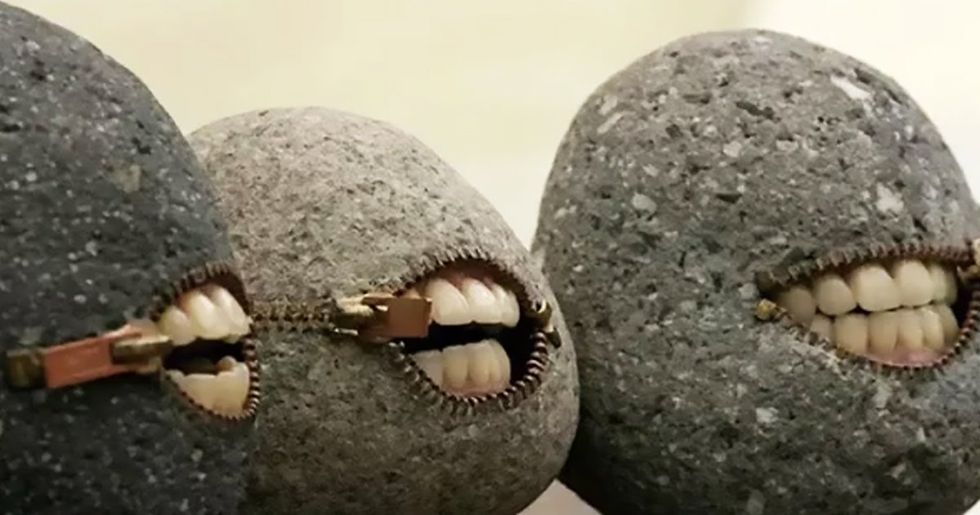 Hilarious and Vaguely Unsettling Images That Will Make You Say 'Thanks, I Hate It'

There are some real Photoshop wizards out there on the internet. They can smooth away pimples in their Instagram pics, put long-dead actors into new movies, and the laws of physics don't apply to them. But as much as all those examples may feel like an affront to our desire for authenticity, at least we understand why someone would make these unsettling images.

These Photoshops? They're indecipherable. They're obtuse. They're just plain weird. And they're all unsettling in a way that will certainly make you say "Thanks, I hate it." But, you know... just vaguely unsettling.

Think about what kind of person would make such a thing. Yikes.

Let's not drag Spotify into this.

Now that's a carrot fit for a meal.

We get it, Arby's. You're insecure in your masculinity. Will shaping meat into a carrot help? Because real men? Real men eat vegetables. Like, a lot of vegetables. Maybe even too many vegetables.

This galaxy cannot be too far, far away.

I know this is an unpopular opinion, but I think people should keep their feet as private as they keep their genitals. Feet are weird and gross and I don't care for them. So to see someone wearing boots that still show off their feet? It feels personal.

Anime is not as realistic as it could be!

Thanks, I hate honey.

Hmm. I hadn't really thought of honey in that way before. And now, I can never have it again. Thanks a lot, Reddit. And I just found out I liked it on peanut butter sandwiches, too.

Gonna need the MPAA to re-rate this movie ASAP.

Listen, Tarzan didn't grow up in a society like the rest of us. He doesn't know how unacceptable it is to use your butt as another hand. What he needs now is our understanding, not our scorn.

Thanks, I hate plat.

Muscle crows are the worst crows.

If you had asked me yesterday if I thought I could take a crow, I'd have given myself pretty good odds. Then I learned that crows can lift, and I'd have a different answer.

Thanks, I hate bizarro world.

If quantum theory is correct, and there truly are infinite universes where everything that could happen has happened, then yes, there is a universe where our teeth are bristles and our toothbrushes are teeth. And they probably think we're the disgusting universe. Our two universes will one day go to war. And we must win. We must.

Thanks, I already hated spiders.

I've killed a lot of spiders in my days, mainly because they terrify me a lot. But if they're capable of coming back, zombie-style? They are sure to seek revenge on me.

At first, you want to argue. "It can't be. I haven't been eating a croissant, cheese, and children sandwiches every morning!" And yet, if you search your feelings, you know it to be true.

If matter can be neither created nor destroyed, where are all those eyelashes going? And more to the point: do we really want to know?

I actually kind of liked the trailer until now.

The Sonic the Hedgehog trailer took a real beating online when it was released a few months ago, but I thought it looked sort of fun. They definitely nailed the part about Sonic being fast. But if I have to look at those Hedgehog/man feet in theaters? I'm going to demand a refund.

Wario, can you not leave your stuff all over the place?

If there's one thing we know about Wario, it's that he's a-gonna win. And if it's a power play for him to leave his thong over at your house on top of your Pokeball? Well then guess what? You've already a-lost.

Thanks, I hate my new nephew.

Who's job is it to name spiders?

If only there were a way to communicate with the dead before we raised them. You know, to see if they were into it? Is there really such thing as a medium who can talk to the dead, like from the show Medium?

Were – were you out of milk?

Cookies belong in milk, my friend. In milk. What you're doing to that cookie is a crime against treats.

When my grandfather passed away five years ago, I thought I heard his powerful baritone in the SpongeBob SquarePants theme song. But they all told me I was mad... mad I say...

The One Where We Mourn All We That We Were

You know in the Friends theme song when it goes, "I'll be there for you/ when the rain starts to pour"? This is what they were talking about. The rain has started to pour. And it shall never stop.

If only we had a chocolate center.

Man, that caramel guy got ravaged by those M&Ms. Are Red and Yellow performing a hit? Was Caramel in deep with the mob? (In the candy world, Willy Wonka is the head of the M&Ms/Mars crime family.)

Thanks, I hate teeth.

After having spent the last 14 minutes meticulously running my tongue along my teeth, I am here to report that no, our teeth do not taste like nothing. They taste like licking a warm, clean dinner plate.

This almost makes me glad I had such a bad childhood.

I just wish I knew what I could give my skeleton to make him happy there inside my body. I've been drinking a lot of milk so as to make him strong, but what good is strength if you cannot run free?

Not sure why you'd want your face on your helmet. Is it so people can still recognize you with it on? Because they'd only be concerned that you got into some kind of inter-dimensional accident.

What a twist it would have been if, in Toy Story 4, Woody revealed his plan all along was to switch souls with Andy and become the man while he became the toy.

Children are no longer allowed to draw.

If I ever again see a man with his back towards me, I will not tap him on the shoulder. The risk that he could turn around and look like this is just too great.

Thanks, I hate reaching out.

I'm very glad my number neighbor didn't send back a haunted invitation to join a Teletubbies cult. That's not to say the "stfu nerd" they sent back didn't hurt, though.