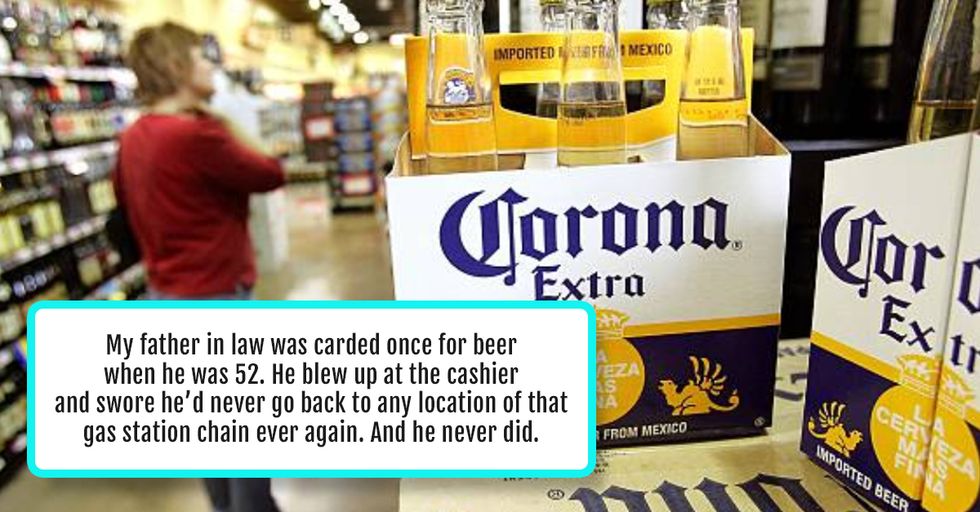 Alcohol laws in America sure are funny, aren't they?

If you think about it, you can go to the military at 18, but you can't (legally) buy a beer before you're 21... not that this prevents people from trying.

Spoiler alert, this almost never works, and even if it did, you probably shouldn't do it.

Not only can you go to jail, but the person who sold you the alcohol can be fined and lose their license. That being said, here are a few of the funniest attempts.

One time, this group of teens came in trying to buy alcohol, I asked for a card. In my state, if they come as a group, you have to ID as a group. Guess what? Not a single damn one of them had an ID. We also have audio monitoring on our pumps, so when I sent them outside, I heard them trying to get other people to buy it for them. I then spoke over the intercom 'Won't work', and saw them immediately bust out laughing at it.

At least they tried, right? Who can't remember trying (and failing) to buy alcohol as a teen? And actually, there's a lesson to be learned here. The gas station attendants can hear you even when you're outside.

I had this girl actually get screaming mad at me for IDing her, said she used to work there but my boss didn't remember her, she left yelling that he was a goof. Thirty seconds later a guy comes in with his ID and asks to buy what the girl couldn't. If she had worked there she'd know that that's on the no-no list as well as not providing alcohol to people who can't prove their age.

We have one question – how is CaptainKodah sure the guy was trying to order for the girl? Did she have a super specific order? On the other hand, "I used to work here" is a super stupid lie to tell, as it can be very easily disproven.

LonesomeHebrew has this tale to tell,

My father in law was carded once for beer when he was 52. He blew up at the cashier and swore he'd never go back to any location of that gas station chain ever again. And he never did.

We can't help but wonder whether his father looked super youthful? Like maybe he could pass for a very mature looking 30? Any which way, 52 is the age where you'd think you wouldn't have to worry about IDs anymore.

4. But I literally have a baby

Here's an interesting one from Bran_Solo

I live practically next to a grocery store so naturally I do tons of little shopping trips. I have seen the same cashier once a day probably 5x/week for the last 10 years, and he still IDs me every single time I buy alcohol. I can't tell if he's fucking with me or if he's legitimately face-blind. I now have a newborn. The other day I'm in there with the baby strapped to my chest and I go to buy beer. Same damn guy that's ID'd me at least a few times a week for TEN YEARS looks at me totally straight faced and despite the baby strapped to my chest asks to see my ID. I made some comment about how the baby should be enough and he goes "Never know, kids these days." [...] I get it, people under 21 can have kids. You are missing the point of this anecdote.

We're hoping that Bran_Solo is either a guy, or a woman buying beer for others, because, assuming she's the mother, drinking while breastfeeding is sort of iffy. It can slow milk production and affect the baby's sleeping patterns.

5. Not with your daughter

I have been denied purchase of beer because my teenage daughter was in the store with me. I had my ID, but for some reason because she didn't have an ID, I couldn't prove she was my daughter. We have different last names, anyway. Our state IDs do not list your parent's name. Since this liquor store is just down the street, and I was a regular, I was confused.

We're confused too. Why would she be denied alcohol based on who's in the store with her? Maybe they thought she was buying alcohol for a minor? We don't quite get it.

Here's one we've literally never seen before. Reddit user stumpdawg writes, "Went to a bar and few years back and a chick got in with her highschool yearbook."
Her yearbook? Why would she take her yearbook to a bar? If she had it, why didn't she have her ID? What did she do with the yearbook the rest of the night – show it to other bar goers? We have so many questions.

7. Not sure this works

Or is appropriate, for that matter. RedditIsATimeSucker writes that her way to get into a bar is to "flash the bouncer. Either they will love my tits and let me in, or they will go "yep, you're old." And let me in. Win-win."
We have questions about this. And deep, deep reservations. But mainly, we have questions.

8. Do you remember tapes?

User Brawndo91 speculates that is one way to get into a bar:

I bought a shitty stereo for my garage a few years ago and it had a tape deck so I put one in for shits and giggles. When side A was over, I instinctively fast-forwarded to the end so it would be at the beginning when I flipped it over. I hadn't listened to a tape in so many years, I hit the button and thought "how the hell did I remember to do that?" So that might be a way to prove your age. "What do you do when the last song on side A is over?" If you're old enough, you'll say "fast forward then flip the tape over."

It could work. Okay, probably not, but it's a good try, though.

Bartender here!! I see this a lot and we do a few things. If you don’t have a government issues picture ID in a physical form we technically shouldn’t serve you as it can lead to all sorts of trouble. HOWEVER, if you are kind and cooperative I may accept a combination of ID’s ... for example a student ID with a picture and another picture less ID with a birth date. If you’re extra kind (or attractive) I may even accept a birthday post on your Facebook wall from a friend that states your age as long as your Facebook name and credit card matches in name. Lastly but not recommended, having a picture of your passport, driving license or residence permit could be considered. But that’s often how underage kids “borrow" ID’s.

So basically, what he's saying is, don't be a douchebag, and you might just make it into the club. It also, of course, helps if you're a hot woman.

This happened to my wife about 5 years ago at a Halloween party at a bar. I wasn’t very worried I just said you’re a pretty girl you will get in to problem. We talked to the bouncer I showed him her Facebook profile with her birthday on there and pictures from our vacation for verification. It worked and a great time was had by all.

This is actually a pretty cool way to prove your age... assuming anyone would believe it. Whomp1970 says they would "show [the bouncer] my smallpox vaccination scar. They stopped giving out that vaccine around 1986." Smart.