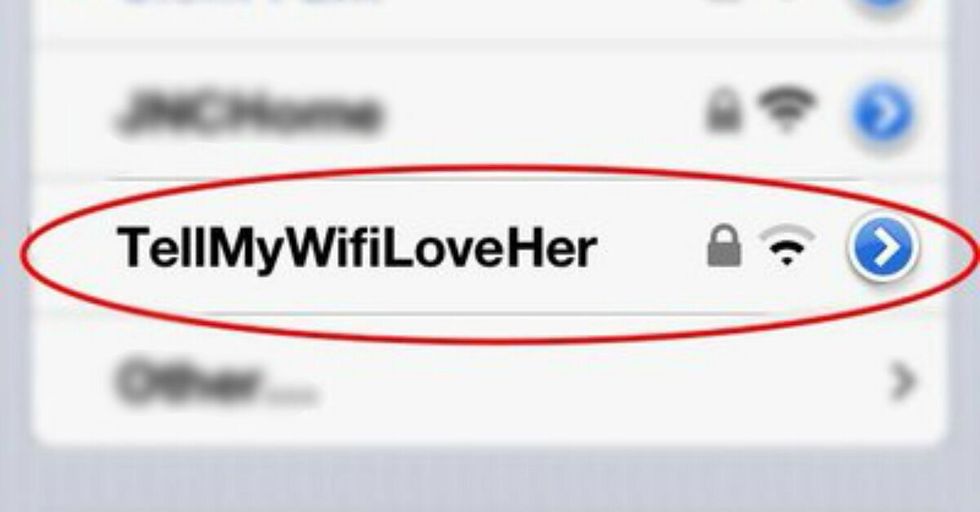 Most people might just use something simple like their own name or even just the name of the router they're connecting with. Then there are these people who had a little bit more fun with it.

It Hurts When IP

I think the first site you should check out once you log on is probably WebMD.

How sweet. But you should probably tell her yourself.

Viola! Ask and you shall receive!

And now the song is stuck in your head...

Which is worse? There are really no winners here.

But there's an emoji for that. Yes, even that.

Just when you get the last song out of your head, this one comes and sneaks in.

It turns out smells do travel.

They're just trying to appeal to your conscience. It won't work, but valiant attempt

And if you don't, he'll throw Werthers Originals at you before heading back in to watch The Wheel of Fortune.

Or you could just call her or rather send her an email. Then again, this gets the message across.

It's Not a Race

How do they know this is true? Busted.

A Word of Warning

Don't even think about trying it. Although seeing that there makes it even more tempting to try it.

The eternal battle rages on.

See? We told you to not even try it.

And they all lived happily ever after. Congrats!

For when you're feeling a little bit naughty, I guess. Actually, to be clear, the company name is CeX.

You can probably get the news you need online if that whole paper thing continues to be an issue.

Actually, this is the password for a Methodist hospital, but I guess you never know what they're doing in there.

They get points for creativity. It's better than the unfortunate fellow down there who lost his neighbor to a zombie.

When the hotel charged for Internet, he decided to create a new network. Genius.

At least they're being honest. Well, kind of.

When you just can't find a Hallmark card to express your emotions, use the name of your Wi-Fi network to let the neighbors know how you feel.

It appears there's a hostage/ransom situation going on here. Slowly back away from the plastic birds...

And apparently he doesn't clean up after himself. You might want to help him out.

Your name should include a capital letter, lowercase letters, and several punctuation marks to make a booby doodle.

Pretty Fly for a WiFi

And all the ladies say...