29 of the Funniest Yard Signs You've EVER Seen | 22 Words 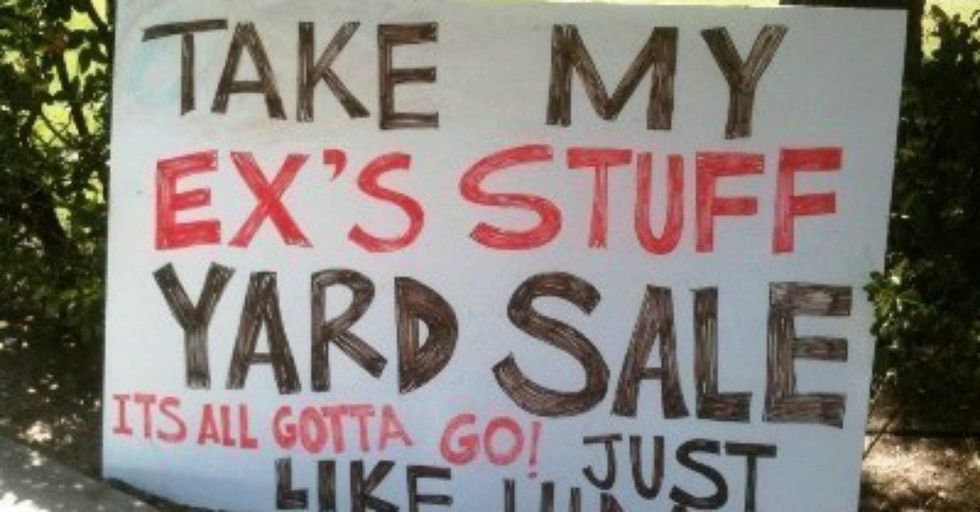 29 of the Funniest Yard Signs You've EVER Seen

We've all driven through neighborhoods and seen the boring signs for garage sales or whatever else people are trying to sell — and sometimes get back. Most of them are, well, pretty mundane and don't really catch your attention.

But every once in awhile there's a sign that's so clever it just might lure you in...

Seriously, unless you have cookies, your services are not needed here. Just move along. They've got Jesus. They're all good on that front, so peddle your wares someplace else, please.

At least he's honest about it. Isn't honesty the first step towards making a change? I think it is, but selling this thing might set someone back a bit. And hey! At the very least, it makes a lovely rack to hang your clothes on.

Maybe he's a jerk because he has no tail? Or because you called him overweight? Either way, it's a safe bet that Eddie strolled out that door because the owner could have been a little nicer. At little sensitivity might help...

They do say that sex sells.

But are the beer, chicken, and sex swing part of the deal or is there a price? In any event, the people who attend garage sales are weird enough. I'm not sure adding booze and sex to the mix is such a great idea. Regardless, two-day party! Buyer beware!

But you must act now!

One man's crap is another man's crap being sold in a garage sale a couple of years down the road. You have to give them points for honesty. It's not like 99% of the stuff sold at these things is anything BUT crap.

They're very proactive and simply just trying to nip things in the butt — literally. Take note, everyone: this is how you manage to be passive aggressive AND proactive all at the same time. It's not a bad approach, honestly.

So what is more disturbing? The fact that they have video or that their grandson is trained to crap on command...in a yard?!? Maybe a picture of their grandson would instill more fear in the discourteous passersby.

Exercise your right to vote.

Not you, but everyone else. Seriously, not you. We promise. You know Obama's "Hope" poster? This is definitely the opposite of that. This is "DOOM." Strange times we're living in, people.

Please don't be an enabler.

Be considerate, people. Quitting is hard enough without temptation. That cat is obviously going through some things and could use a little support. It also could have a promising career in the circus if it keeps these things up.

Hold me closer, tiny grasser... On another note, I wonder just what tiny grass is dreaming about? Rain? Probably just wishing it was in a field somewhere instead of a park where kids and strollers trample it every day.

It starts right after the wake. Something tells me the family might miss his stuff more than they actually miss him, which is quite sad when you really think about it. All profits are going to hire someone to write a slightly more sensitive obituary.

Was she married to the grandpa above?!?

via: No Way Girl

Regardless, one has to wonder what Granny did to earn this honor. But you have to admit that it actually sounds like an interesting sale. It might have all the twists and turns of an amusement park ride, only in a much more psychological fashion.

I'm guessing things didn't end well. When you've got TWO women broadcasting your cheating, it seems that perhaps you put your confidence in one too many people during your tryst. And also that Luann and Vivian aren't too happy about this news.

You have to admit that that type of behavior is simply for the birds. And also that next time they'll put down the phone and maybe walk over like a good neighbor. As long as the complaints keep coming in, something tells me this flock will continue to grow. And grow. And grow.

Are there pushy salespeople in lab coats spraying perfume on you? Groups of teenage girls sipping Starbucks and trying on clothes two sizes too small? Let's just hope the parking situation is better than it would be at a mall!

This Boxer gives their owner the silent treatment after being left in the car to check out a yard sale. Check it out in the video below!

Then again, you may not. You never know unless you check, but using the word "crap" isn't inspiring a lot of confidence that the wares for sale are particularly valuable or interesting. Maybe it's just a form of the soft-sell, though.

In fact, it inspired many emotions in this guy. And you have to admit that the P.S. is a nice touch, even if it's poor form to have the postscript run longer than the actual body of the letter. Someone could use a correspondence class!

It looks like one of those rap guy's garage sales. I mean it's like so large, it's like out there... If you're courting fans of pop culture, you're doing things right. Old school hip-hop fans will be beating a path to your doorway!

That's really taking aim at would-be robbers. A little over the top? Maybe, but I guess it works. I mean, who would tempt fate with a body-shaped target with bullet holes in the front yard? The neighbors must be thrilled.

Do NOT be fooled!

Not only did this guy lose his pet, but he also lost his nunchucks. No word on if he's teenage or a mutant (or a turtle), but better safe than sorry. If someone says an animal is dangerous, I'm inclined to believe them right off the bat.

Is another man's hobby. And a much cleaner one, I would assume. If you have to compare your yard sale to dumpster diving, people might be skeptical of the value of what you're putting up for sale. But there's always hope!

To clarify, he is not in love with you. And he is also quite sleep-deprived, so don't take it personally. That's why you don't take NyQuil and go out leaving notes on cars. Or maybe, just never put notes on cars.

He can't believe it's not more expensive...or that it's not butter. I'm not sure what's for sale at this yard sale, but if it has Fabio's approval, it might be some pretty interesting stuff! But there are probably a few romance novels to choose from.

That's an important factor in buying a house.

Unless you want to be on an episode of Ghost Hunters, of course. It could be your shot at fame! Then again, maybe the house really ISN'T haunted, and this person is just terrible at selling things. That's actually more likely.

He's the one you want to have in your corner. Unless, of course, you're actually fighting the one in your corner. In that case, no! Mike Tyson as a marketing technique is a questionable approach, for reasons that I may not need to get into.

Not that she's bitter, or anything. Just remember, an ex is an ex for a reason. But his stuff is yours to sell for pennies on the dollar, so check out this event. It sounds like there are bargains to be found!

A little birdie told me...

Polly wanna (be served on) a cracker? Please bring a dish to pass. And if there are people showing up to eat, I hope that there's more to eat than just one measly parrot. I would hope for many, many more, actually. Not that I want to eat exotic birds...

And with two simple words, a stampede of frat boys descended upon the lawn. I can see more stuff getting stolen and damaged at this event than actually sold. Also, this might be totally illegal.

Making America great again, one cocktail at a time. (Or two or three or four.) Do they have your vote? I'm sure this will get the coveted pirate vote, which is a powerful swing group.

Care for a spot of tea? Or rather, finding another use for that tea set? I'm frankly impressed they're taking credit cards. That's a real game-changer for garage sales!