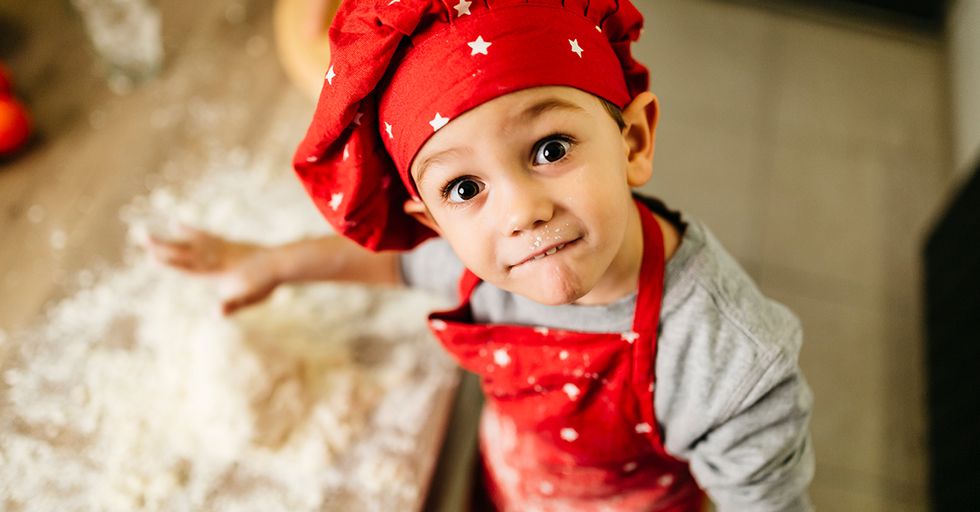 Kids say the darnedest things. And if you're lucky, someone — either a teacher, parent, or family member — is there to record those "darnedest things" so you can enjoy them forever.

That's exactly what happened in one pre-k class. And luckily for us, the uncle of one of the students shared the whole thing with the Internet.

His nephew's pre-k teacher had compiled a recipe book filled with recipes from each student in the class. This wasn't your typical cookbook, obviously. The teacher recorded every recipe exactly as the student recited it. The results are absolutely amazing.

Let's start with a basic recipe for eggs.

Now, I know what you're thinking. They're eggs. Do they really need a recipe? Well, the answer is yes.

Here's how to make eggs, according to Adams' nephew Ethan:

Now, it's gonna take you an hour, but it only costs three bucks, so that's a pretty good deal. Oh, also, there are Skittles.

There are no eggs in the recipe. In the egg recipe. No eggs. Ethan appears to be one of those avant-garde chefs.

I get that you might be confused as to how pancakes, sugar, and Skittles come together to make eggs, but luckily for you, you can just go to Ethan's house and his mom will make them for you. It's right in the recipe, after all. OK, let's move on to the next adorable recipe...

This one is for macaroni and cheese.

Most kids are quite familiar with macaroni and cheese. They've probably seen their parents or babysitters make it countless times. Think the recipe will match the one you find on the back of the Kraft box?

Well, not quite. Here's Ariana's recipe for mac and cheese:

Melted cheese. Sure. Macaroni. Makes sense. Backpack? If you say so, Ariana.

This next one is for tacos. Kind of.

Here's how to make tacos, according to Joe.

Just kidding! This was a recipe for cheesy roll-ups the whole time! Gotcha! It's actually for watermelon!

Joe's recipe really takes you on a journey.

And actually, now that you mention it, I could go for a cheesy roll-up right about now. Unfortunately, I don't know where to buy the white cheese, either. Guess it's watermelon for dinner again.

We all either knew a Joe or were a Joe when we were younger. But I'm feeling pretty confident that Joe's gonna grow up and be just fine.

Pancakes are the perfect breakfast food. Unless you follow Sebastian's recipe.

See if you agree:

Now, I'm no pancake expert or anything, but I am reasonably sure that you need something other than salt to make pancakes. That being said, I'm willing to give Sebastian's recipe a try.

OK, I just put a bunch of salt on a hot thing and I guess I made pancakes? I had no idea this was how pancakes were made. Neither did anyone else on Twitter, it seems...

Sebastian is another avant-garde chef.

You can try to complain about your pile of salt, but Sebastian will simply insist you're eating a pancake. You probably just aren't sophisticated enough to understand the nuances in his recipe.

This recipe is all kinds of relatable.

Are you Sebastian's pancakes? 'Cause you're certainly acting salty right now.

This is too real:

The only thing missing is turning all of the periods and spaces into size 14 font in order to make it take up more of the page. (I can't be the only one who did that, right?)

Other Twitter users soon began sharing their own recipes they had written as children:

Like Nick's recipe for pizza. I'm a big fan of the shout-out to his mom at the end. That's an important part of any recipe.

And here's another mac and cheese recipe:

It has cheese and it has macaroni. What more could you possibly ask for in a mac and cheese recipe? Huge thanks to Jordan Adams for bringing the Internet together to be completely charmed by his nephew's pre-k class and their incredible recipes. Share these recipes with your favorite foodie!