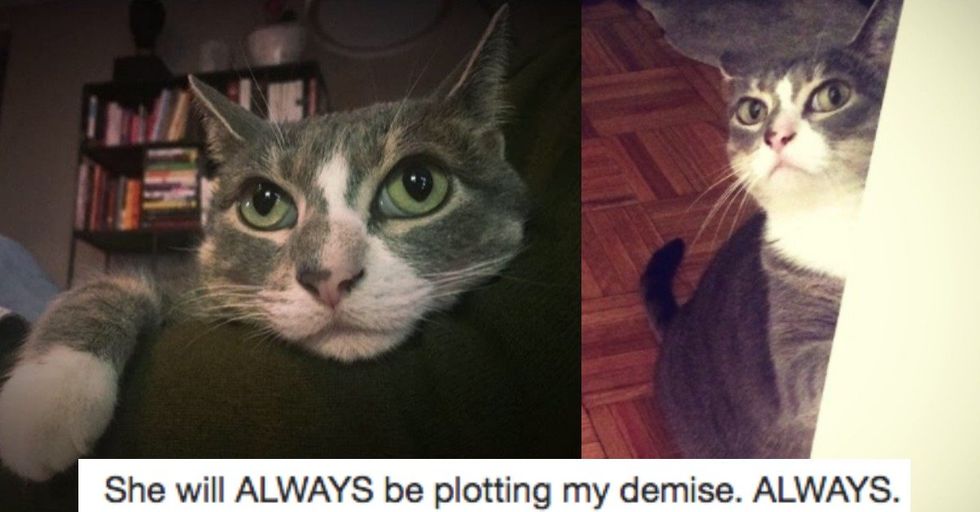 Cats can be both awesome and awesomely arrogant.

There are times they're your furry little friend, cuddling up to you, allowing you to pet them, purring like a hotrod engine. Then there are times they're just, well, evil — completely ignoring you, biting the hand that feeds them, and basically reminding you that it's their world and you're just living in it.

Babou slipped out the front door of Irwin's apartment in Charlotte, North Carolina, last week, and she knew she had to make an honest "Missing Cat" poster in order to try and bring her home.

And when I say honest, I mean honest.

"Babou is a 6 year old, spayed, grey female shorthair with no chip and no collar, about ten pounds. She's been missing since Friday morning, June 9th. She's mostly friendly but may run if you try to catch her - she's kind of a jerk, too. She has strong opinions about things." The flyer goes on to include the area Babou went missing from and lists Irwin's contact information.

But it was her interviews that followed that really give you a look at this feline's personality.

“I live in a big apartment complex and my guess is someone found her and took her in," Irwin told the Charlotte Observer. “But Babou is not the kind of cat people would keep. I assume whoever found her wants to get rid of her. She is the weirdest cat ever."

"She likes to sit on you, but doesn’t want you to touch her," Irwin went on.

“She likes to sleep on your head and she’s a talker. She has opinions about things and is very verbal. She will sit next to you, stare you in the face, and start a conversation that is a bit uppity."

Babou’s sass even made its way into Irwin’s husband's wedding vows at their 2016 ceremony.

“I will be by your side for richer or for poorer, in sickness and in health until death do us part or Babou finally accomplishes the world domination we both know she is plotting," ABC News quoted him as saying. But of course, they still missed her and wanted her back.

When asked about a reunion, Irwin figured it would play out like West Side Story.

“It’s going to be like the Sharks and the Jets and she’s going to be leading this team of wild cats," Irwin joked. “She’ll show up in two weeks missing an ear and patches of hair and smoking a cigarette all like, ‘You should see the other guy. I’d tell you where he is but then I’d have to kill you.’"

In reality, it was much more average than that.

Babou came back to the apartment of her own accord on a stormy Tuesday night. “Babou walked up to our front door in the pouring rain and meowed LOUDLY until we let her inside," Irwin told ABC News. “She's a little thinner and totally soaked but home safe and sound!!" Hopefully they'll get her a microchip — and of course, whatever else she demands. After all, it's her world. They're just living in it.