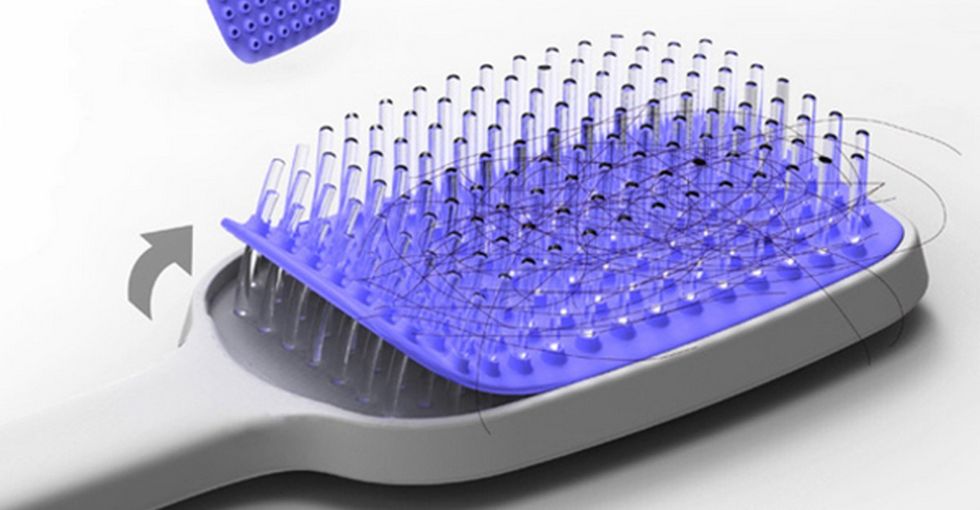 We might not be floating around in flying cars, but some of the things that exist today that we take for granted — cell phones, the Internet, automatic car starters — weren’t even on the radar just a few decades ago...and yet we rely on them.

Perhaps 20 years from now we'll be looking at one of these 30 dubiously incredible inventions and thinking the same thing — “How did we ever live without it?”

Serbian designer Damjan Stankovic's Eko light incorporates a circular, visual countdown timer wrapped around the red light. Rather than enable quicker green-light launches, the countdown light would serve to de-stress drivers by providing them feedback of exactly how much longer they'll have to wait.

We hope you find these products as awesome as we do. Just an FYI: We are a participant in the Amazon affiliate program, and Brainjolt may receive a share of sales from links on this page. Prices on Amazon fluctuate so anything mentioned below might change as soon we publish it!

Because no one would ever use this for nefarious purposes like racing, right?

Worried about missing an important part of the movie because you drank too much soda during the previews? Problem solved.

If you're in a hurry or if you like avoiding human interaction whenever possible, this is the pizza place you're looking for. You pick the toppings and it actually bakes the pizza for you right there on the spot.

Outlets with Extension Cords Built In

This 1.5 meter cord unfurls from a cavity behind its socket. When you don’t need extensions, it’s neatly tucked away. When you need it, simply pinch the sides and wind it out.

"What happens when it gets tangled up in the wall," you ask?

The Drop Rest mug catches drips before they make it to the paper or surface of your desk. Capitalizing on the physics of surface tension, a thin groove keeps small, nuisance droplets in place so there’s no need to worry about coffee stains.

A Pen that Scans and Writes Any Color

Scribble, available either as a conventional ink pen or as a mobile device-compatible stylus, works with an advanced color sensor and microprocessor backed by LEDs that illuminate and scan anything you like.

Because, of course, there weren't already enough options from which we could choose.

From designer Sung Woo Park, it's a park bench that rotates with the turn of a handle. So if it's been raining — or if you just don't trust the person who used it last — you can rotate it around to sit on the dry side.

Tile is an iOS app that syncs with small tags that you can attach to important belongings like keys, laptops, purses, and wallets to help you find them when they’ve been misplaced. With the app, users can track if they’re getting closer or further away from the tile (if they’re within a 50-150 foot range) and can also set off an audible alert to help find the lost item.

Just don't lose the actual tile. That would kind of negate the point, so good luck with that.

New and Improved Way to Clean

Hop on, zoom across the room, and get all your boring chores done in record time.

Rotating 360° is a multi-outlet socket system that allows you to add many sockets to the strip – LEGO style. The main feature is that you can turn around the socket-outlets in any direction, so as to accommodate various plugs.

No more driving up and down dark parking lots wondering if that space is open when lights can take out the guess work.

And it will also take out the stream of profanity you'd spew when you pull into what you thought was an open spot to find a tiny motorcycle taking up 1/10 of the one remaining spot.

Create Your Own Six-Pack

Tired of committing to just one flavor? Create your own combo that you can take home with you.

Beijing customers can insert a plastic bottle and have the redemption value of the bottle placed on their subway card, and then are ironically given a paper receipt. It’s the thought that counts, right?

Now your helmet can take up less space once the ride is over.

Put this on your bucket list. Get it? Bucket helmet? Bucket list? I'll show myself out now...

Why should kids have all the fun? (Although the injury risk would probably negate any benefits, to be honest.)

The Epiphany One Puck doesn’t just protect your table; it also charges up your phone without needing to be plugged into an outlet. It uses a small Stirling engine to provide the power. The device has two sides, one red and one blue. Place a hot drink on the red side, or a cold drink on the blue side.

The downside? Liquids next to electronics. I guess you pick your battles.

This is one way to try and stop people from littering.

It's also one way to give short guys the chance to actually perform a dunk.

Harness the power of the sun to charge up your phone - weather-permitting, of course.

So if you live in the Midwest, where winter lasts for approximately nine months more or less, you might want to pass on this one.

Save money on batteries while also saving the environment. Win-win!

This makes it easy for you to refill your water bottles instead of trying to fruitlessly aim the stream in there on your own.

Now if they could somehow come up with a urinal that helped guide the stream, I think we would be all set.

This helps prevent the spread of the most common illnesses because, let’s be honest, there’s nothing worse than wondering if the handle is wet because someone washed their hands or because they didn’t.

Reduce clutter and make things simple with the Power2U outlet that features two standard 125 volt three-pronged AC receptacles, plus two female type-A 10 watt USB ports that allow you to power up to four devices instead of yelling at inanimate objects to "hold onto their 10% battery life for just five more freaking minutes!" Hypothetically speaking, of course.

Whether you’re working with paper, fabrics, or hair these Laser Guided Scissors will (attempt to) assure you have a straight-as-an-arrow cut no matter the surface.

Never get your hand stuck in a Pringles tube again (and don’t try to pretend that it’s never happened to you).

You can stack plastic bags in these trash cans so you won’t have to mess with them and you're never left without a liner.

In other words, look classy using plastic bags to avoid scraping gum off the inside of the trash can. Awesome!

A Brush You Can Easily Clean

Let's be honest. It's easier to just throw away the old brush and get a new one than try and clean out the hair. No more!

Pop out the old, put in the new, and continue on with your brushing.

This would turn outlets into outlet/nightlight combos that can light a path at night or make the outlets easy to find in the dark.

Perfect to light a path to the fridge so you can plug in the toaster in the dark and sneak in that midnight snack.

Regardless, These earphones use a zipper with the headphone cable embedded inside to stop you from damaging it with daily use. Any areas not protected by the zipper are wrapped in fabric, keeping them safe as well. At the end, you have a reinforced 3.5mm jack which stops the inner cable from fraying.

Backpack with a Built-In Hood

Have you ever thought, "I'm wearing this backpack AND a hoodie and I wish there was a better way?" Now there is.

The Puma Urban Mobility Backpack features a large hood (with colorful inner lining) on top and the sack itself features a two-way zip front compartment, a padded laptop sleeve with hook and loop closure, and multiple interior pockets.

You might look like a weirdo, but at least you'll stay dry and avoid walking into a wall.

Featuring a goggle-shaped cutout, a piece of this umbrella’s canopy has been replaced with clear plastic. By doing this, the canopy cutout allows you to see the street ahead without lifting the umbrella out of the way.

Even George Jetson would be proud these inventions.