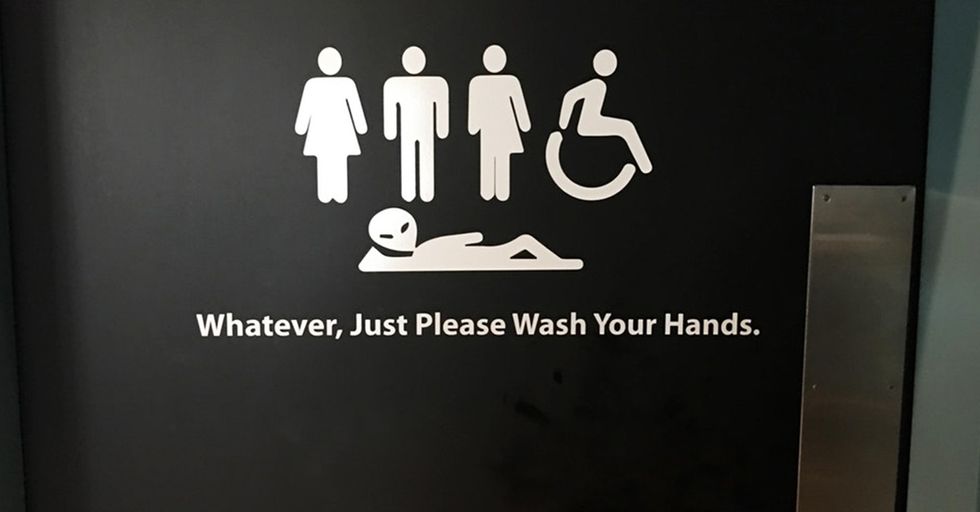 You've been diligently plugging away, sitting at your cubicle punching numbers all day. You deserve a break.

These pictures are so random that you'll be wondering what they possibly have to do with each other.

The answer is nothing. They're just all weird and funny and I wanted to share them with you!

OK, you got left, Roy, you peel right. Get it? Peel right?

Wow. Can you even tell where the real cat ends and the computer drawing begins? Because you should very much be able to tell.

This pup is the best at smiling. Look at those pearly whites! So big, so impressive, so handsome!

This sign for a hair salon is spitting hard truths that might be difficult for you to hear. But it's true. The next picture is really monkeying around.

The caption for this photo is hilarious! "My mom said that a monkey was sitting outside her window and kept licking it. I found it hard to believe. She then sent me this gem."

Is it just me or is this message on the bottom of the package of candy kind of actually really creepy? I hate it.

See, the thing about this license plate is that you think it's talking about your white Corvette convertible. But it's actually talking about a frozen dessert topping.

Love this. No matter what gender (or species) you are, you can use the bathroom. Just please wash your hands.

Heck yeah! I love this. It's so true. The next one is disturbing on a new level.

Eating a Kit Kat like that is psychopathic behavior, and judging by the expression on this guy's face, he knows it and feels no remorse.

This is just some good old-fashioned lying, and I love it. Maybe that powerline would be mistaken for the Eiffel Tower by a toddler.

I am generally against bumper stickers and window decals on cars, but I will make an exception for doge.

Tom Holland is Spider-Man, and he is also definitely this cat. There is no difference between them.

The image of Yoda on the right is so haunting and terrible that I will never recover from this. The next one is truly baffling.

The caption for this photo reads: "My name is Isabelle. Went to the same Wendy's twice and had the same cashier."

I like to believe that the man didn't actually believe it was a bomb and just wanted to brag about his giant zucchini.

I simultaneously can't stop looking at this and can't look at it for another second. It's a real conundrum.

Money from your undergarments

I cannot imagine the issues they were having that prompted writing this sign. I would not want to be that cashier.

This is a dad joke and a protest poster all rolled into one, and I love it. Share this with someone who could use a laugh!