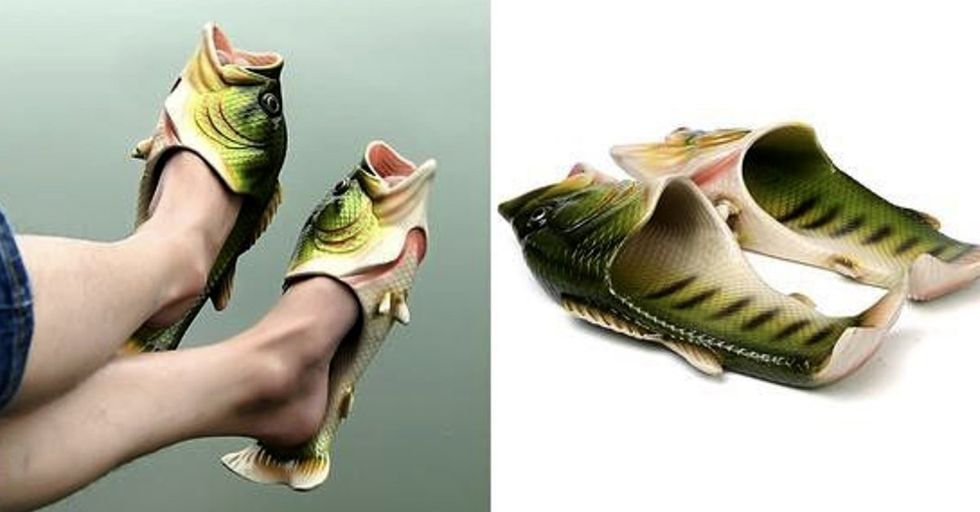 People all over the world are doing terrible things to shoes.

Shoes are a great way to express yourself through fashion.

But they can also be turned into literal nightmares. Here are the worst crimes against shoe-manity ever.

No amount of hot pink can change the fact that these are some Crocs on top of stilettos. No thank you.

Wow, if you have these, you'll be able to show everyone up at the next square dance night!

This can't be a comfortable life for you or the fish. This is one time Nike's "Just do it" motto was taken way too far.

I have one question about this, and it is: WHY? The next one is even more ridiculous.

Why would you put injury shoes over your regular shoes? I suppose if you really couldn't sacrifice your style with your broken toe.

Why is there only one?!

This package needs to contain at least two emotional support shoes. What am I going to do with just one? Feel half-supported? I have my mom for that.

Having this many Barbie heads looking out at those you pass by is creepy enough. But it'll be especially bad once they start to talk to each other...

What are you lookin' at?

These shoes are a real sight to see! You see, because they're covered in eyes. And eyes give you sight. I'm just gonna head home and take a nap now, if that's okay with y'all.

Okay, I don't want to rag too much on online video game player Ninja and his line of terrible-looking sneakers. If kids love Ninja, I want them to be happy. But you never even see this guy's feet on his streams — just his face. We have no idea if he would wear these kinds of shoes! (Hint: he wouldn't.)

I love the gold on the inside of these shoes, but I can't help but feel like it detracts from the overall banana theme?

I hate the idea of using these snow-shovel shoes to actually clear snow from my driveway. Wouldn't that just be murder on your quads?

These shoes look so bad, not even the Riddler would wear them! Although to be fair, The Riddler tends to favor a single question mark or two on his tie, or hat. You know, keep it understated.

These shoes are not only ugly. They're also practical. Anytime you can wear footwear into battle that can impale your enemies, well buster, you've got yourself an advantage.

What is even happening here?

Is this shoe made out of leftover spaghetti drainers? Or-- wait! They're shuttlecocks! That is... not much better.

If the world is going to be this awful, why do we even try?

The whole point of shoes is to keep your feet from looking this disgusting! Who are the people who need to learn that lesson? It feels like common sense to me!

An entire ecosystem on your feet.

I know that an inevitable part of owning shoes is that they get a little dirty, a little scuffed-up. But these bad boys? They got so dirty they started to produce life.

Pray to whatever god you believe in.

These are, without a doubt, the most disturbing shoes I've ever seen. (I honestly hope that's the last time I have to say that in this article.)

It does add much-needed storage space.

Does this kid know he can just get a regular pencil case? One that isn't a shoe? I just feel like he's going to stab himself in the toe with those scissors if he ever tries to run.

Also, why are they labeled?

Crocs, as we already know, are ugly. They're comfortable, but they're ugly. But why add shoelaces to tighten them up? Then they're no longer comfy! And that's the one thing you're supposed to like about wearing crocs!

As someone who strongly believes that all feet are gross, these shoes feel like a personal attack.

Did you guys have just a bunch of weird junk lying around the house that you had to get rid of? "Hey Gary, just slather a shoe in glue and drop a bunch of that trash on it. That's how we'll clean up the joint."

What is that dripping off this shoe?

Too much beauty for one ugg.

I'll admit, a lot of shoes are pretty dull, what with their brown leather or plain white material. But this excessively colorful Ugg is going too far.

A shoe from a parallel universe.

At first glance, sure, this looks like a normal sneaker. But give it a second look, and you'll see that it's clearly a sneaker from another universe, and its molecular structure is breaking down now that it's crossed over into ours.

Look at all those emotions...

Okay, obviously these shoes look ridiculous and should never be worn by anyone. But also? Wouldn't it be funny if you were a Senator and wore these on the floor of the United States Congress?

Are people into wearing what looks like legitimate animal hair boots? And more to the point, are they into wearing it on their ostensibly fashionable heels?

An endless riddle, in shoe form.

You put the laces in one loop, it comes out the other, and there's never going to be any explanation why. It's like when Scooby-Doo and the gang used to run away from monsters through all those different doors. It never made sense, and it was always infuriating.

Ah yes, the bird's foot. The least aesthetically pleasing part of a bird. I can see why someone would put them on a high fashion pump heel.

Did someone just take an old water shoe and add jewels to it? Who takes the least expensive shoe and crafts the most expensive diamonds onto it?

This is the design for Kanye West's newest shoe. It's the worst thing he's done since that weird album of gospel music he put out last year.

Superman sometimes fights Bizarro, an alternate universe version of himself. That's what Lugz boots are up against when they go up against these — Bizarrugz.

Again, I think feet are weird (including my own), so I don't wear sandals. But aren't the point of flip-flops that they're super comfortable? Adding a hell to them defeats the entire purpose.

Who is Karl? Why does he have his won pair of boots? And more to the point, why did a company think Karl was so universally beloved that other people would buy his boots?

Listen, I've seen enough romantic comedies to know how this turns out. One of those real birds is going to fall in love with a shoe bird, and once the shoe-bird finally comes clean, they'll live happily ever after.

Part of a healthy diet.

Okay, some of these shoes have simply felt like misguided attempts at pushing shoe fashion-forward. But these? These I am convinced are a prank, pulled by someone who accidentally bought too much cabbage at the store.

This is a different type of horseshoe. And I hate it.

These are great shoes if you're like, a witch in that Roald Dahl book and you have to extra convince people you have toes.

If you're battling dry, scaly feet, try these! They'll blend in, and no one will notice. Of course, you might get some looks for different reasons.

I don't even know if there's anything wrong with the actual shoes, but the way this person is wearing them will haunt my nightmares forever. The next one might make you hungry.

I bet these are really uncomfortable, and you probably don't want to wear these on a white carpet. The sauce would get everywhere!

Even the most stylish of dentists should not wear these. They are supremely creepy, and I hate them. Moving on.

These are either batting gloves or driving gloves and either way, the way they make your toes look as long as fingers drive me nuts.

Who knew that Nike was in the clown shoe business? What I really don't want is to make it easier for clowns to run and chase me.

These boots look so cool and normal until you get to the toes. Who wants to wear these? And why? The next one takes alligator leather to the next level.

These are kind of cool? In a "You should still never wear these in public" kind of way.

These are a big ol' NOPE. And one more time for people in the back: NOPERS!

Just looking at these shoes made me say, "OW!" out loud. To no one. These are just torture devices.

Wow! There is nothing to like about these! I do want to see the rest of the outfit though. Share this with someone who needs to feel your pain!