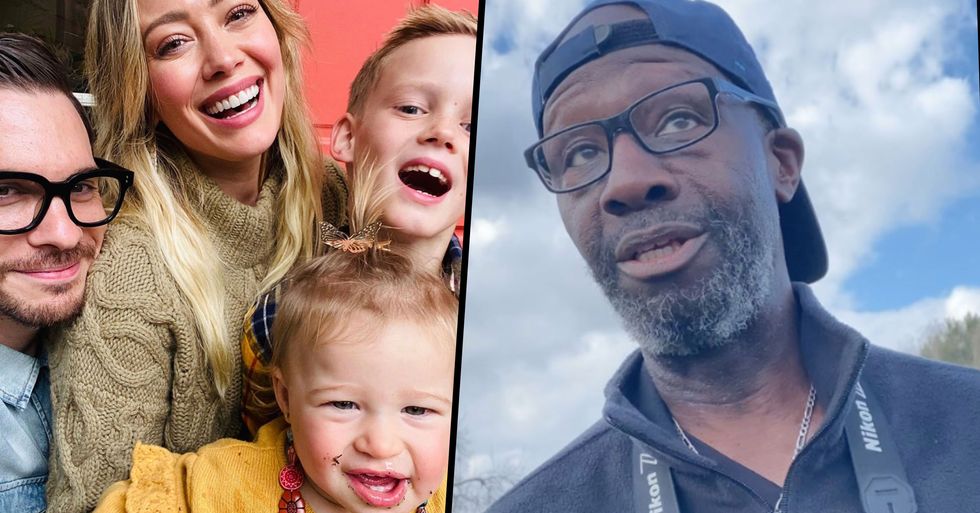 Hilary Duff Confronted a 'Creep' Who She Caught Photographing Her Kids

When it comes to parenting, it seems as though everyone out there has an opinion - whether or not they actually have kids themselves. But Lizzie McGuire star, Hilary Duff, faced an issue famous parents always find difficult - trying to prevent the paps from taking shots of her babies.

Hilary Duff is a ray of sunshine.

She's one of the few people in the world with a truly infectious smile - and when she laughs, it seems to light up the room.

She's best known for the role that made her.

Duff played the titular character in classic '00s teen sitcom, Lizzie McGuire  - which, for many of us, was the show that marked our childhoods.

It also spawned one of the most iconic spin-off movies of all time.

The 2003 teen romance was set in Rome, and gave us one of the best musical numbers of all time. You may also recognize her from teen rom-coms like A Cinderella Story, plus her cameo role in Gossip Girl.

Duff's love life has been something of a whirlwind.

The pair had one child together.

Their son, Luca Cruz Comrie, was born in March 2012 - and here are the 3 of them together.

It seems like Duff is still pretty obsessed with her baby.

Now, 7-years-old, Luca makes regular guest appearances on Duff's social media pages - and it appears that the 2 are very close.

Unfortunately, not all relationships are so simple.

In January 2014, Duff and Comrie announced they were splitting up. Reportedly, their separation and divorce were amicable, and the 2 continue to co-parent Luca.

But love was just around the corner for Duff.

She met musician, singer, and songwriter, Matthew Koma, when working on her 2015 album, Breathe In. Breathe Out., and 2 years later, in January 2017, the pair got together.

And soon there was even more good news.

Duff announced that she and Koma were pregnant in June 2018.

And in October 2018, their family was complete.

Duff gave birth to her second child and first daughter, Banks Violet Bair, via a water birth in her home in Los Angeles on October 25th last year.

And Duff isn't afraid to show it. Her social media pages are filled with images of her first daughter, whom she is very much enamored by.

Here's Luca with his mom, Duff, and his step-dad, Koma, proving that happy families really do come in all shapes and sizes!

Duff is a protective mother.

And one thing she particularly hates? Her kids' photographs being taken without her permission.

"This guy has been at my sons soccer game this morning then followed me to my sisters house and was basically parked in her drive way to get photos. Followed me to run errands. I politely asked him to let me be and he continues to follow and stalk me down like pray for hours now."

"This is not ok. I am 9 months pregnant. When people say that’s what you get for signing up to be a celebrity it honestly makes me sick. This is every day of every month and it’s simply not ok. If a non “celeb"(I’m sorry to use that word) was dealing with this the law would be involved."

And unbelievably, she's faced the same situation once more.

She approached the photographer saying, "Do you know any people on the team? Can you stop taking pictures of the kids please?"

He replied, "it's legal," and offered to show her ID. Duff hit back, "I'm not asking for your ID. I'm asking you to stop taking pictures of our 7-year-old children if you don't know anyone that's here. I'm asking you human-to-human — as a mother — if you don't know anyone here, can you please stop taking pictures of our children playing football this morning?"

Many have spoken out in support.

"They're our children and we would like to protect them," Duff finished.

We have to say, we're impressed by Duff's fearlessness. Go, Hilary! Fancy more from Hilary Duff? Scroll on for all of the details on the much-anticipated Lizzie McGuire reboot...