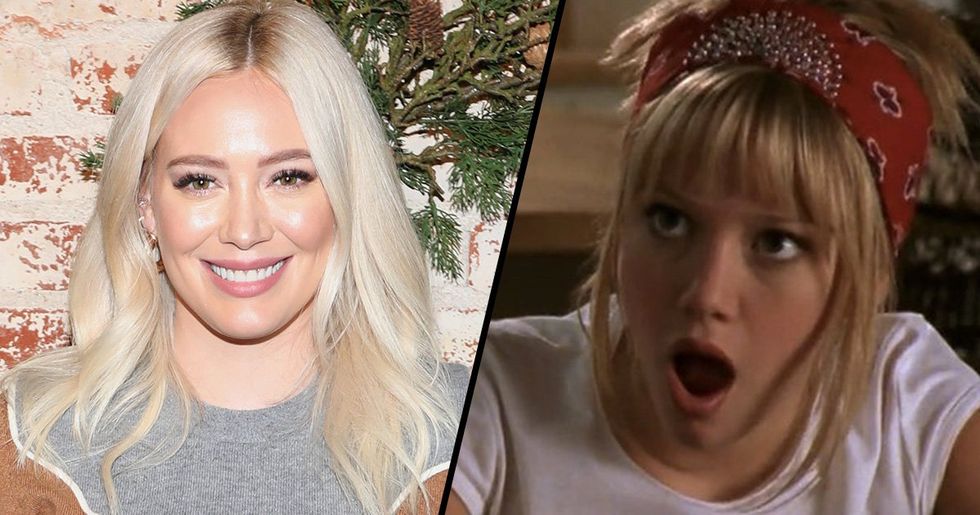 Hilary Duff Says A Lizzie McGuire Reboot Could Be Happening

If you're a '90s kid, you'll definitely want to hear this. We all know a TV show can't last forever--but sometimes, when the show is really good, it comes back! And we certainly hope that will be the case here.

Actress Hilary Duff is currently starring on Younger, and gave an interview for Entertainment Tonight. During the conversation, she answered a very important question about her most iconic TV role. When asked about the future of Lizzie McGuire, Hilary revealed that the show may not be as 'over' as it seems.

Find out what the deal is, and reminisce about one of the great old kids' shows of the early 2000s. Who wouldn't want to catch up with Lizzie McGuire herself?

Because Hilary Duff dropped some potentially amazing information about the future of the show!

When last we heard from Lizzie…

She had just graduated from school, and made a splash in Italy!

You’ve gotta love the way Lizzie went to Italy, fell for a pop star, found out he was a fraud, teamed up with his co-star who conveniently looked just like her, and did an amazing duet in front of thousands!

This is what dreams are made of.

Have you ever wondered what happened next in the life of our teen idol?

Now, we may finally know.

In a recent interview, Hilary confirmed that the idea of a Lizzie McGuire reboot is definitely being explored.

“There’s been some conversations," Duff said. “It’s definitely not a go. I don’t want to get everyone wild talking about it."

But, like…there is already hope.

Because how great would that be?!

*If* the show happened, here’s what it would be:

Basically, the reboot would follow Lizzie in her current adult life, after the events of the movie (because we can’t have Lizzie McGuire without Lizzie herself, Hilary Duff!)

Hilary had some thoughts on the show.

She was asked where she thought Lizzie would be at this point in her life. “I’m racking my brain," she said. “I don’t think she’s a mom yet, but she might be getting there soon."

Duff also acknowledges how important the show was for kids.

“I mean I love her so much. I think she was so important to girls at an important time in their life. If she could be important to them again at this age, I think that would be amazing."

And it’s true that the show was important.

For the kids back then (the young adults of today), Lizzie McGuire was all about the best and the hardest parts of adolescence—and it helped us deal with our own lives!

In the meantime, fans are already excited.

How could they not be?

15 years, in fact. Bring on the revival!

Fans are ready to relate again.

All the old Lizzie McGuire fans are grown up too—and in the same place she would be if the revival happened.

She can do it!

And with this fan reaction, maybe whoever calls the shots will see what a great idea this is.

We’d get to see the dream team again.

Lizzie, Gordo, and Miranda were the cutest!

The show is becoming a rallying cry.

Got your sick days saved up?

Because plenty of fans are ready to go into full binge mode over this.

Even if a #LizzieMcGuire reunion simply comes down to cast members having a nice dinner out together or vacation so… https://t.co/mI9IwWpHyc
— Schroeder (@Schroeder)1544235934.0

Some fans are even happy with a private reunion…but let’s be honest, we really want that show.

Because some suggested that her current character is pretty similar to Lizzie already!

Although there’s a critical difference:

Like, they’re already asking if Gordo is even available.

Because while Hilary Duff still acts and actress Lalaine (Miranda) is an actress and musician, Adam Lamberg (Gordo) has retired from the public eye.

This has the makings of a heartwarming holiday film.

It always goes back to Gordo, doesn’t it?

Or, fans are just dreaming.

Because the magic of Lizzie McGuire has infiltrated even our subconscious.

Fire up that soundtrack!

Then again, we’d probably listen to that song even without this talk of a revival.

One guy, who makes movie posters, even whipped one up:

It seems so real now!

Also, the show’s creator is totally into it.

When asked by TheWrap last year, Lizzie McGuire creator Terri Minsky said, “I would do it in a heartbeat."

Of course, it’s not up to her either.

Minsky added, “Somebody else has to want to do it and make it happen, but I certainly try to let the involved parties know, ‘if anybody’s interested, hi!’ I would absolutely do it."

So let’s hope something comes of all this.

Minsky even thinks that Hilary’s Younger character is a pretty good approximation of Lizzie as an adult.  “She still looks like Lizzie McGuire to me in this role," Minskey said. “The fact that she is this cool, fashionable, intelligent executive, it all makes sense to me, and the only thing missing is the little animated character telling us what’s really going on inside her head."