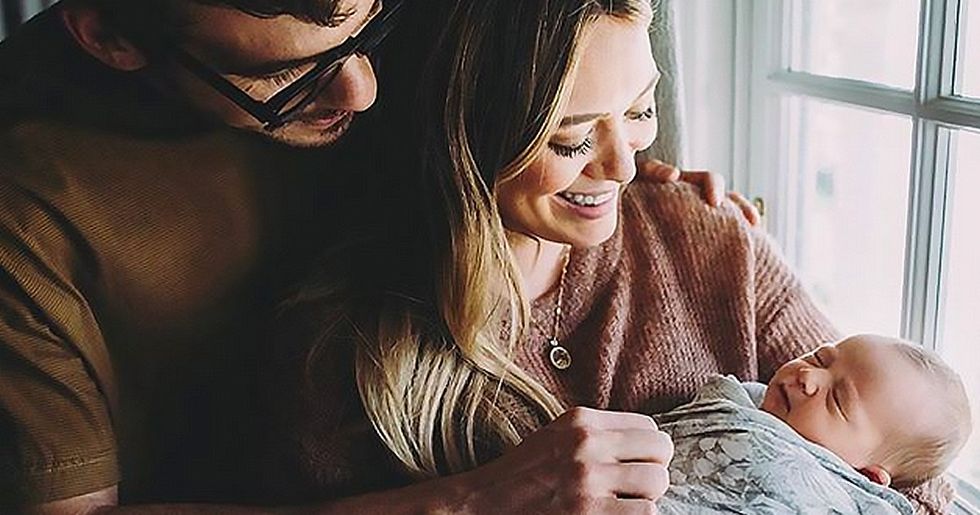 Hilary Duff – who is most famously known for role as Lizzie McGuire in the Disney TV series, Lizzie McGuire – shared an intimate clip of her water birth with fans.

Hilary gave birth to her second child, a daughter named Banks Violet Bair in October 2018. The mother/actress/singer/songwriter/author delivered her daughter via water birth and decided to share the personal video on her Instagram page, just a mere five months after her birth.

In the video (which has 2.7 million views at the time of this writing), her infant baby clearly tries to hug her mama, as if to say, "job well done, mom." It's a beautiful moment between a mother and baby and how wonderful to have it captured on video. Banks' father is an American singer, Matthew Koma. The couple has been together since 2017. Duff also has a 7-year-old son named Luca Cruz Comrie with ex-husband, Mike Comrie – a retired Canadian hockey player.

Hilary took to Instagram to share a very personal moment - the moment after her baby girl was born.

"I’ve been wondering for a long time if I would ever share this video as it is extremely personal...." she wrote.

Duff also commended her boyfriend, Matthew Koma, who also appears in the video.

"Matt provided such a safe, calm strength. My mommy and sissy were there to cheer me on and, of course, my birth angels to make sure all was well — and big brother, downstairs, deep in Legos."

"I cannot believe this day was only five months ago."

She continued, "It seems like B. has been here with us all along." And as a mom of two young kids, I will say the actress is not exaggerating with that statement. The first year of your child's life does fly by.

Proud dad, Koma has also been sharing his fair share of intimate photos of his beautiful family on his Instagram page.

In this pic, he writes the caption, "every day I write the book." I couldn't agree more. Raising littles is a book with many wonderous chapters. And with so many memories to look back on – like their birth video! But before we get to that...

Let's remind the world that Duff isn't the first celebrity to have an at-home birth.

Dawson's Creek actor, James Van Der Beek, and his wife delivered their fifth (yes fifth!) child in the comfort of their own bedroom! I guess when you have that many children, you know exactly what to expect.

Van Der Beek also shared an intimate photo of his newborn daughter, Gwendolyn, shortly after she was delivered.

He captioned, "happy healthy baby, happy healthy Mom in her own shower right after giving birth." And yes, that is the placenta in that bowl. You cannot get any more raw and real than this image.

According to US Weekly, several other celebs have opted out of the white, sterile maternity ward at the hospital, to enjoy the comforts of their own home.

Singer, Alanis Morissette delivered her son, Ever at home in 2011. She said, "my home is like my little sanctuary."

Actress Alyson Hannigan said, "she never liked hospitals. I wanted to be as comfortable as possible when I gave birth."

Hannigan has two daughters with her husband, Alexis Denisof.

Model Gisele Bündchen also delivered her son at home in a bathtub.

The model, who is married to Tom Brady, delivered their son in their now former Boston apartment. And she did so au naturel – no epidural for this tough mama!

It's important to note the actress did say that her birth was "attended by a skilled midwife." There are many things that can go wrong during delivery. Ensuring you have a midwife or doula in attendance is something you definitely want (when giving birth at home), for the safety of both baby and mom.

According to US Weekly, Anderson told Larry King Live in 2002 that she delivered her sons via water, with no drugs – "not even Tylenol."

Hippie chick, Mayim Bialik delivered her son at home while her older son sat in his high chair eating granola.

The Big Bang Theory actress blogged about how her son "slithered out" with the help of a midwife.

Supermodel, Cindy Crawford also opted to deliver both her children at home.

Makes you wonder if these celebrities know a secret us common folk do not? At-home water births, with no epidural or pain medication? I assume the water helps with the contractions, but I wouldn't know, given that I delivered both of my children by my OB in a hospital.

Former talk show host, Ricki Lake delivered her first son in the hospital and her second son at home.

Her home birth was also unmedicated and Lake preferred her second delivery so much that she made a documentary called, The Business of Being Born.

And now, Hilary Duff! Here's the heartwarming video of her daughter's birth:

"It was so absolutely lovely and rewarding (and shocking) that, after giving birth to my baby girl, we hugged...for the first time," said Duff.
This short video will literally tug at your heartstrings. It is no wonder Duff wanted to share with her fans. But, why did she wait so long? It's an absolute precious moment caught on camera.

Apparently, little Banks suffered from colic, as Duff says in the caption of her photo, "thanks for quitting colic - that was a doozy.

Colic, also known as the "witching hour" is a monster. My oldest daughter had colic and it was literally hours and hours of pure crying. And it always occurred in the late evening hours. We are glad to hear Banks is over that hurdle.

Home births are popular amongst celebs, but normal everyday women can also opt to deliver at home.

According to the American Pregnancy Association, for centuries women gave birth at home. But by the 1900s more women chose to deliver their babies in the hospital.

Many women also want to avoid the risk of tearing (episiotomy) and having an epidural administered.

A home birth also allows you to move around more freely and most importantly, you can enjoy the comforts of your own home.

Of course, not all women should have an at home delivery.

If you are having a high-risk pregnancy, have high blood pressure, are diabetic, have preeclampsia, or experienced pre-term labor in the past, then home birth is not recommended.

A qualified midwife does bring supplies with her for the birth.

Such as oxygen for the baby (if required), an IV for the mother if she needs it, and most importantly – medications to stop or slow down hemorrhaging.

An at-home birth does have several benefits, including being cheaper than a hospital delivery.

A home birth also allows for a more intimate setting, where mom and baby can have immediate bonding with no interference.

You can also have your older children present and extended family surrounded by you, giving you all the love and support you want and need.

If you are pregnant now and are "on the fence" with regard to how you want to deliver, talk to your OB.

It's also important to have your baby examined by a pediatrician within 24 hours after birth.

You will also want to interview midwives to see what their philosophy is.

And with anything, it's wise to always have a Plan B. Things can go wrong, you will need to have a plan in place should something go awry.

But remember that women have been delivering babies since the beginning of time.

And while some women do not second guess getting all the pain medication in the world to ease the delivery, others are determined to deliver drug-free.

And if you follow in the latter and want to have a more private affair, then you too could have an easy birth at home, just like Hilary Duff and the other celebs mentioned in this article.

Regardless of how you choose to deliver your baby, the reward is worth all the effort.

If you don't believe me then just take a look at these adorable family pictures.

I think baby Banks would've given her famous mommy a big hug even if she chose to deliver at the hospital.

There is nothing more beautiful than the bond between mother and baby.

I think this picture says it all.

You can't help but feel all the feels with this picture.

A baby makes a home incredibly joyous, despite all the crying and late night feedings.

We'll leave you with this little gem of this mega-star family.

Family is the best blessing there is!