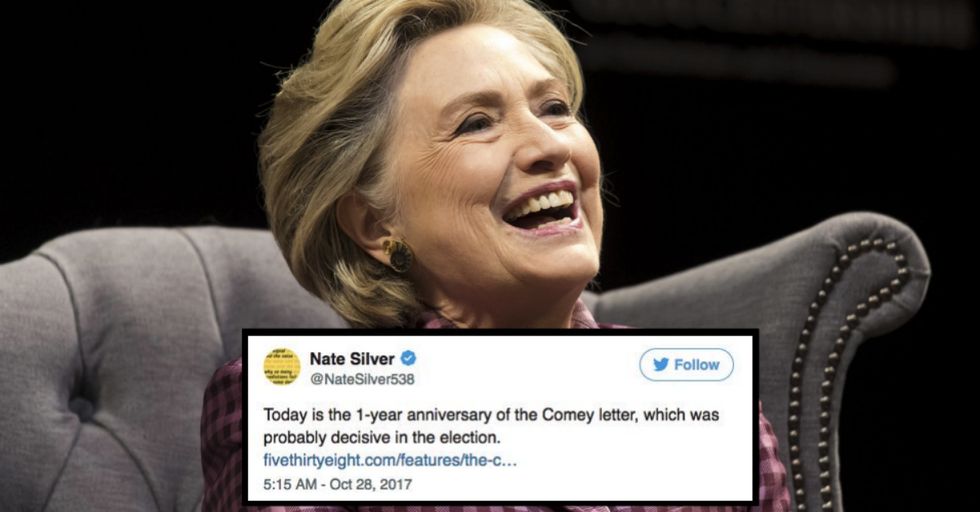 Amidst the first indictments in Robert Mueller's Russia investigation, we were reminded that Saturday, October 28, 2017, was the one-year anniversary of the release of what has become known as the "Comey letter": the note released by then-FBI director James Comey mere days before the presidential election, which revealed that the FBI had discovered new emails that could be significant in the investigation of Clinton's use of a private email server when she was secretary of state. Looking back, many believe that the Comey letter, though vague, was incendiary enough to cost Clinton the election. On Saturday morning, Hillary herself was reminded what day it was, and her reaction is priceless.

Before James Comey became a hero for his straightforward testimony before the Senate Intelligence Committee in June following his firing from the FBI, he did something days before the election that would result in a Donald Trump presidency.

He released a letter. The Comey letter reignited Republican rage about Hillary Clinton's emails just over one week before the election. At the time, Clinton's spokesman Brian Fallon said of the Comey letter, "It only serves to give Republicans a new line of attack on Hillary Clinton." The new emails that the letter claimed had surfaced were reportedly found during a separate inquiry involving Anthony Weiner, the former congressman, current subject of several sex scandals, and husband of Clinton's aide, Huma Abedin.

October 28 was the one-year anniversary of the release of the Comey letter, as FiveThirtyEight's editor-in-chief Nate Silver pointed out in a tweet:

Today is the 1-year anniversary of the Comey letter, which was probably decisive in the election. https://t.co/FjiCZKHbdr
— Nate Silver (@Nate Silver)1509192902.0

In his tweet, he linked to his essay entitled, "The Comey Letter Probably Cost Clinton the Election." This is not a small deal. We're very likely on the trajectory we're on and in the presidential predicament we're in because James Comey decided to release a vague letter that can basically be summed up by the three words "but her emails."

As if she didn't know what day it was already, as if she didn't spend weeks after the election carving "OCTOBER 28" into every tree in the woods of Westchester County, Hillary Clinton addressed Comey Letter Day in the best way possible, by responding to Nate Silver's tweet:

So smooth, so flippant. So casual about the letter that destroyed her chance to be the first female President of the United States. Days after the Comey letter was released, he sent out another letter saying that they found nothing that would warrant charges against Clinton, but it was too late. The damage was already done.

Hillary Clinton's cool-as-a-cucumber response is particularly biting considering that indictments of Trump's associates in Robert Mueller's Russia probe are starting to pour in.

Clinton has mentioned the now-infamous date before, so we know she was definitely aware of what day it was. At an event in May, she said, "If the election had been on October 27, I'd be your president." Even earlier this month, she told CNN that she "would have won but for Jim Comey's letter on October 28." In perfect Hillary Clinton fashion, "Oh is that today?" probably means something like, "I told you so. And by the way, you misogynistic, power-hungry pieces of s*** really f***ed me over." (We're paraphrasing, of course.)