This video shows a very close up view of the fire itself. | 22 Words 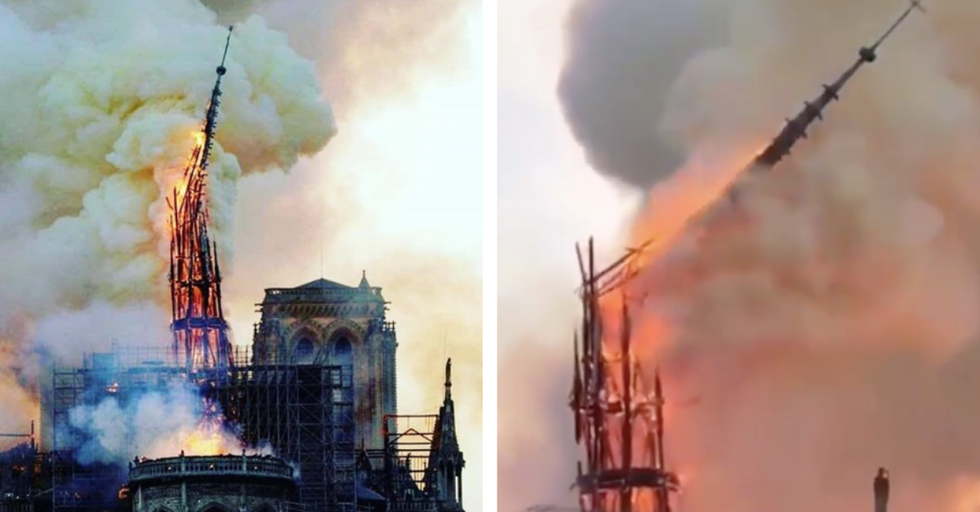 Historic Spire of Notre-Dame Cathedral Has Collapsed Into the Fire

A devastating fire has ravaged the 800-year-old Notre-Dame Cathedral in Paris.

Around the world, people are mourning, but one more than the French. Notre-Dame is more than a church for Parisians — it stands as a symbol for the city and its long and storied history. It's also one of Paris' most-visited tourist attractions. According to CNN, it draws around 13 million visitors a year.

Original construction on Notre-Dame began in 1160 under Bishop Maurice de Sully and was completed in 1260.

It was the cathedral in which Napoleon was crown Emporer of France in 1804, in which Henri, Count of Chambord was baptized in 1921 and became known to the world through Victor Hugo's famous novel The Hunchback of Notre Dame in 1831.
According to INSIDER, "Flames first engulfed the iconic cathedral's roof — taking down the building's spire— before spreading to its wooden frame. Firefighters had trouble reaching the flames due to the cathedral's height; its spire was 295 feet high." And Andre Finot, spokesman for Notre-Dame, told the French media, "Everything is burning, nothing will remain from the frame."

Fire crews are currently both inside and outside the cathedral, fighting the massive blaze.

French Fire Chief Jean-Claude Gallet gave the following statement, according to the Associated Press, "We are not sure we are capable of stopping the spreading [to Notre Dame’s second tower and belfry]."

This is a heartbreaking video of the cathedral's historic spire collapsing during the fire.

400 firefighters are fighting the fire, currently.

In this video, you can hear the anguished screams of those watching the spire fall.

It's a moment we won't soon forget.

Reuters' Reporter Philippe Wojazer was able to briefly go inside to take this photo of the wreckage.

Here, a reporter describes the scene in Paris now.

Older people are coming out of their apartments, and the streets are filled with people young and old alike.

In this absolutely heart-wrenching footage, Parisians sing Ave Maria outside the burning cathedral.

Religious or not, the Notre-Dame serves as a symbol for all of Paris, and the citizens of the city have gathered together in mourning tonight to watch as the fire crews try their best to beat back the violent flames.

There is something so shocking and sad about watching 850 years of history disappear in front of our eyes.

The tragedy of #NotreDame shows how small we all are. One spark and over 850 years of history is burning before our… https://t.co/nRugoS2Ueo
— Dorota Tóthová (@Dorota Tóthová)1555370553.0

French President Emmanuel Macron stated, "It is a terrible tragedy ... Notre Dame is the cathedral of all French ... [it is] the epicenter of our life." In the same speech he promised, "We will rebuild Notre-Dame." He commended the "extreme courage" of those fighting the fire.

This video shows a very close up view of the fire itself.

Our hearts are with the French people at this time. Check back for updates on this emerging story.

Mom Blasts Woman Who Called Her Toddler a 'Thug'