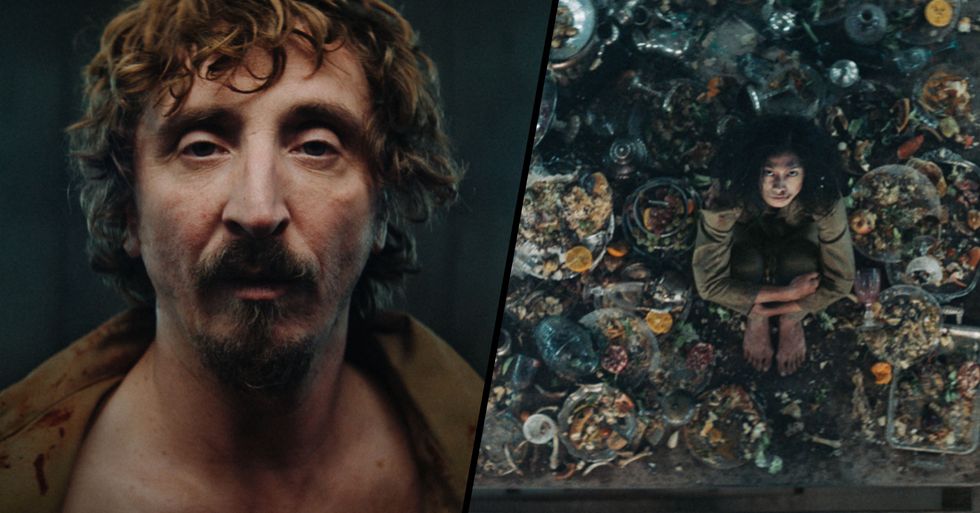 We're finally in an era in which international films are getting recognized and finding their way into the mainstream. From the likes of Oscar Winner Parasite to 2018's Roma, the world is finally opening up their eyes to the incredible cinema on offer when you venture outside of the English language.

And it seems that's been the case with Netflix's newest addition - "twisted" Spanish dystopian thriller, The Platform.

Keep scrolling to see what all the fuss is about...

There's one thing we can all agree on...

Netflix has our backs when it comes to its huge slate of movies and tv shows.

And there's one particular genre which the streaming giant truly excels in...

It’s a strange thing to actually enjoy feeling tense or scared, but the movie buffs amongst us will understand exactly where we’re coming from.

Is it the nail-biting tension? The suspense? The mystery?

Who knows, but there's no doubt that thrillers are up there with Netflix's most popular choices.

And while the platform gives us tons of tanalizing originals...

It also acquires some box office gems too.

But the latest addition to the platform's growing catalog is more of an out-of-the-box choice.

The streaming giant has acquired the right to Spanish dystopian thriller, The Platform.

The "twisted" flick made its debut at The Toronto International Film Festival last year...

The event never fails to deliver us some of the most interesting and unique projects, with the hope of striking up a deal with some of the biggest players in the industry.

And in The Platform's case...

That's exactly what happened - with the movie drawing in significant praise as being one of the most pleasant surprises to come out of the festival.

The Platform features a stellar cast.

With Galder Gastelu-Urrutia in the directors chair and based upon a screenplay from David Desola and Pedro Rivera, the movie stars the likes of Iván Massagué (from Guillermo del Toro’s iconic movie Pan’s Labyrinth), Antonia San Juan (from the Oscar-winning All About My Mother), Zorion Eguileor and Emilio Buale.

The movie is set in a dystopian tower-style prison.

And focuses on the prison's inmates - more specifically, the manner in which they are fed.

In this "not-too-distant" dystopian world, the inmates are housed in vertically stacked cells.

And are forced to watch hungrily as food descends from above.

But here's where the flick gets clever...

While the cells are assigned randomly, those unfortunate enough to be placed at the bottom are forced to fight for survival.

The film ends up focusing on one particular citizen who voluntarily incarcerates himself in the prison...

Why? Because he is promised increased social mobility upon release.

But his incarceration quickly proves to be detrimental, and he is quickly radicalized "igniting a battle that spirals all the way down to the core of what it means to be a human being," according to the movie's synopsis.

"When we meet Goreng (Ivan Massagué), he has just arrived on the Platform and has been assigned to the level of old-hand Trimagasi (Zorion Eguileor) who explains to him the rules: the levels are assigned randomly, those in the upper tier get to eat and those in the lower tier have to fight for survival. Although Goreng is reluctant at first to accept the system he finds himself in, it isn’t long before his survival instincts kick in, igniting a battle that spirals all the way down to the core of what it means to be a human being."

Some are saying the movie is the "perfect companion" to Parasite and Us.

"Oh...hello. You have my attention," wrote one excited user. "The platform on Netflix is coming out March 20th and idk it’s giving me Jordan peele vibes I can’t wait to watch it. It looks like it’s gonna be real good," wrote another.

Safe to say, intrigue is building.

And people are eagerly waiting for the movie to drop. Keep scrolling to find out when you can watch.

Those who have already watched the movie have been showering it with praise...

The movie is well and truly on everyone's mind.

"This is disturbing...so I’ll obviously be tuning in lol."

Speaking of “The Platform” wait till it drops on Netflix it’s coming and it is fucking fantastic
— OffTheDeepEnd (@OffTheDeepEnd)1583947923.0

"This looks....intense to say the least," wrote another user.

Feeling tempted to watch? Check out the trailer below:

The Platform will be available to stream on Netflix from March 20th. Interested in another creepy Netflix movie offering? Keep scrolling to find out why people can't sleep after watching...