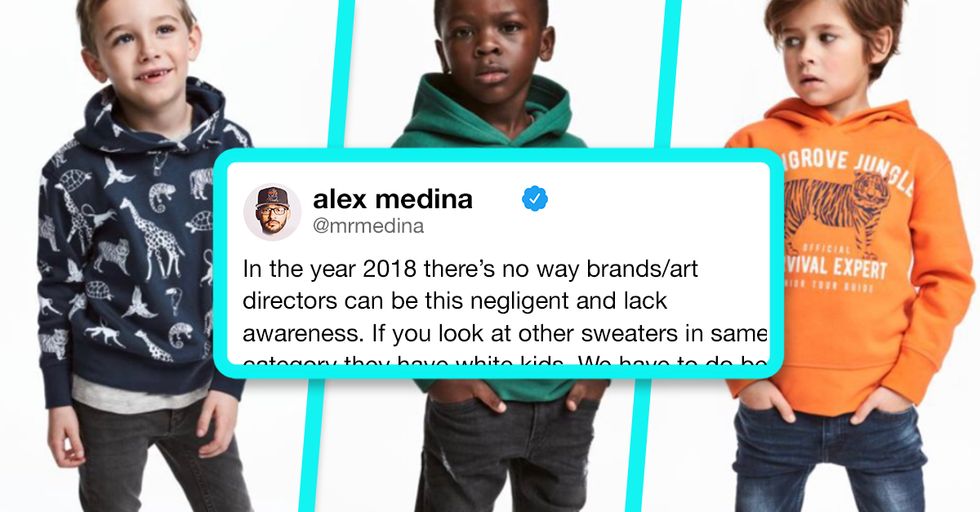 H&M Finds Itself in Hot Water for Racist Advertising, Once Again

We're a little over a week into 2018, and already there's plenty to be angry about. The fact that no women were nominated for the Best Director category at the Golden Globes. Everything Trump tweets. The general state of the world.

And the fact that H&M can't get it together and stop being racist.

Clothing retailer H&M is in the middle of a racial controversy due to a tone deaf ad on their U.K. website.

People immediately pointed out how using the term "monkey" when referencing a black person is a racist term that goes back for centuries. Having a young black boy wear a sweatshirt that says "monkey" on it was a horrible idea.

The company removed the ad from the website after the backlash on the internet.

The hoodie, however, continues to sell online. "This image has now been removed from all H&M channels and we apologize to anyone this may have offended," H&M spokeswoman Anna Eriksson said.

Twitter quickly pointed out the difference in what the young white children were modeling.

The two other tops from the same line were modeled by white children. One of the tops said "survival expert" and the other had images of animals.

"Woke up this morning shocked and embarrassed by this photo, he wrote on Twitter. "I’m deeply offended and will not be working with H&M anymore..."

Many Twitter users took to the ad to give it an update.

One updated the sweatshirt to say, "Coolest Kid in the racist ass H&M catalog." This isn't the first time that H&M has found itself in the middle of a racial controversy...

Back in 2015, the Swedish retailer came under fire for their racist comments in response to the lack of diversity in their marketing campaigns.

A Twitter user asked them why they don't include black models and their response was that "its workers make selections that 'convey a positive image'." They apologized, but clearly have learned...nothing.

The controversy highlights why diversity is imperative in corporate settings. Was there nobody around to sit back and think, "Hmmm. This doesn't seem like such a good idea!"

It's not a person of color's job to teach white people how to not be racist, but when you lack diversity then you continue to sit in your ignorance.

"We are deeply sorry that the picture was taken, and we also regret the actual print," H&M said in a statement. "Therefore, we have not only removed the image from our channels, but also the garment from our product offering globally." Hmmm, except the shirt is actually still for sale on the British site.

The company continued to explain that they're going to investigate how the shirt and the image came to exist.

"It is obvious that our routines have not been followed properly. This is without any doubt," they explained. "We will thoroughly investigate why this happened to prevent this type of mistake from happening again."

H&M is not the only company to come under fire after a racist ad hit the web.

In October, the soap company Dove apologized for a Facebook ad in which a black woman removed her brown shirt to reveal a white woman underneath, wearing a white shirt. There are simply no words to convey the idiocy of both ads. Companies - you need to do better.