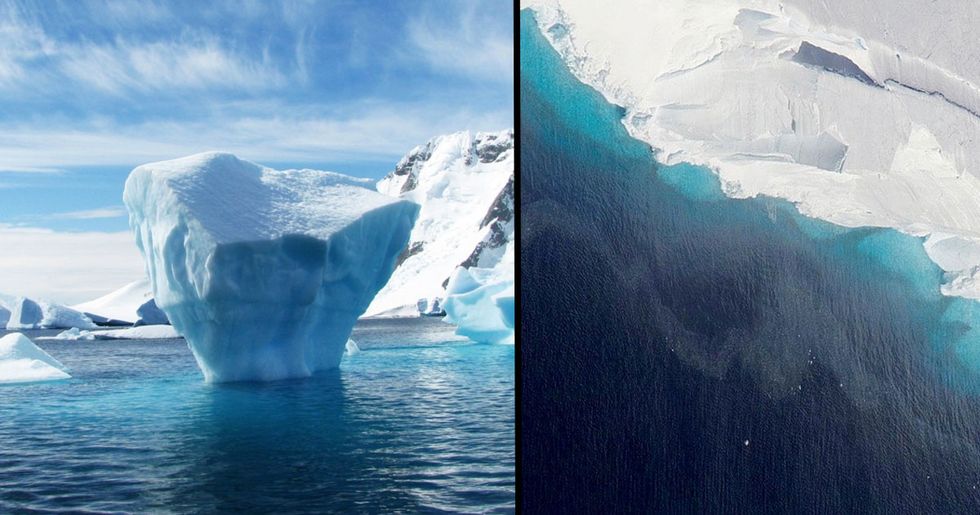 Antarctica is a cold, cold place. We don't have to visit it to know this. Yet somehow a hole has formed. And whereas a hole in the middle of your sandcastle can create a little extra structural work, a hole in the Antarctic creates a whole load of problems.

It's not just that there is a hole. The problem is how big the hole really is, and the devastating impact it will have. Let's see what this hole really means for the world.

There are a lot of odd people in the world who, for some unknown reason, deny scientific fact. In this category, we can put people who don't believe in evolution, flat earthers and climate change deniers. There's probably space in this category for conspiracy theorists too. (Sorry folks but Elvis is dead, and Prince Charlies is not a vampire.)

Do people really still not believe in climate change?

Yes. Even though practically all reputable scientists agree that climate change is occurring, and that it is the fault of humans, there are still some people who disagree. These people do not have evidence to back up their points. They also usually have a vested interest in keeping oil and gas companies going. What are the chances?

Anybody recognise this guy?

The leader of the free world is, predictably, one of these deniers. He has pulled out of the Paris Climate Change Agreement and said that 'right now we're the cleanest we've ever been.' Not only is that wildly inaccurate, as we have only been burning fossil fuels for a fraction of humanity's time on Earth, but it is also enough.

We are all connected, and not just by Twitter.

It is easy to think of Antarctica as a far-away land of ice and glaciers, one that is completely separate from our lives in city blocks watching Netflix. But all our lives are interlinked and every action has a consequence.

The problem with biting off more than we could chew.

Since the industrial revolution began, over 250 years ago, we have been burning fossil fuels like there's no tomorrow. And ironically, it means that now there may be no tomorrow.

So how did there end up being a hole in Antarctica?

As we release more fossil fuels, temperatures rise and ice starts to melt. Scientists knew that the glaciers were melting, but they didn't realise how quickly they were melting. It turns out that as a small hole begins under the ice, it means more warmer water and air can penetrate the glacier from below. This has a disastrous effect on glaciers, making them melt far more rapidly than expected.

How big is this huge hole?

Have you ever dug a really big hole at the beach? I mean a really big hole that takes you all day. Well it's a lot bigger than that. The hole is in fact the size of two thirds of Manhattan Island. Plus, it is 300m deep. To put this into perspective, the Empire State Building is 381m high. So basically two thirds of Manhattan, including most of its skyscrapers, could fit in this hole.

How can a hole be that big?

Have you ever tried to drive the length of Florida? It is a really, really long drive. Well that is the size of the glacier that the hole is in. That might make the hole sound like it's not too big, but the problem is, the more it melts, the bigger and more dangerous it gets.

Why does some random hole in a glacier on the other side of the planet matter?

Ah yes, it would be nice to put some distance between ourselves and this troublesome hole wouldn't it. But as the ice melts, the sea-levels rise. This in turn makes more glaciers melt, so the sea-levels rise further. And so on. You get the point.

But the oceans are huge. What does one hole matter?

The glacier that this hole is in is called Thwaites glacier. So far about fourteen billion tons of ice has melted. If the glacier continues to melt at this rate, the oceans could be raised by over 2 feet (65cm). If the adjacent glaciers followed it, as the area continues to get warmer, it would raise sea levels another 8 feet (2.4m). As you can imagine, this would start to lead to some disastrous consequences.

Where would be affected by the rising sea-levels?

If we take the better-case scenario, that for some reason the surrounding glaciers don't melt, the oceans would rise by 2 feet. This would affect most beach houses and beach-side towns, as a minimum.

The glacier is not just the size of Florida, it could also destroy it.

It is estimated that if temperatures rise by 3C, then the whole bottom third of Florida will be submerged under water. This will affect 7 million people. In the mean time, they will be battling against an increase in floods and hurricanes as climate change takes its toll.

These three U.S. cities will really suffer if sea-levels rise.

New York City, New Orleans and Miami are the three major cities that are most likely to be affected by the change in sea-levels. This means that nearly 10 million people will lose their homes.

But the predictions look even worse outside of the U.S.A.

In Northern Africa, Alexandria and the Nile Delta would disappear under rising sea-levels, displacing at least 8 million people. While in South America, big cities like Rio de Janeiro and Buenos Aires would also be submerged.

But the biggest impact will be felt across Asia.

Coastal flooding, storms, tsunamis, and earthquakes are already battering Japan due to climate change, but sadly, things will only get worse. One city that would go underwater is Osaka. Together with its wider district, this would destroy the homes of 19 million people Meanwhile, Hong Kong would also be mostly submerged, ruining the homes of the nearly 8 million people who live there.

Melting glaciers are bad news for the world's most populous city.

Shanghai has a population of 24 million people. It is one of the economic powerhouses of the world and has a rich culture and history. But none of its wealth can save its residents from rising sea-levels. What it needs is action against climate change.

What can we do to prevent the hole from getting bigger?

There are so many contributing factors to climate change that it can be hard to know where to start. But here are some tips: Don't use single-use plastic. It takes hundreds of years for plastic to decompose and a whole lot of energy to make it. There are usually eco-friendly alternatives that won't kill our planet.

Need some more ideas on how you can save the Earth?

Recycling is a great way to try to tackle climate change. The less we make from scratch, the less energy we will waste making new things. Transport is a huge cause of green-house gases. Every journey we make by car or airplane produces green-house gases that go up into the atmosphere and won't come back down. Wherever possible try to travel in a greener way. You could use the bus, car-pool, or maybe try cycling and walking.

The governments need to do better.

The best way that we can start to make a difference to the environment is through government action. We need to limit the power of oil and gas companies and we need to prevent fracking. We need to make it clear to our representatives in government that we do not support them. We also need to divest from fossil fuels at every level. This includes campaigning for our workplaces, banks and universities to divest too.

Climate change is a crisis.

Aiming to be carbon neutral in a decade or two is not good enough. As we release more green-house gases, temperatures will keep going up, the glaciers will continue to melt, the sea-levels will keep rising and humans around the globe will feel the impact. We do not have time to wait. We need to take action now.

People are not happy about this hole in the Antarctic.

This girl makes a good point. As the ice caps are melting, it starts to put the world into perspective. Rather than fighting over the little things, we need to start working together to tackle this crisis.

You can say goodbye to idyllic beach tourism.

Have you ever dreamed of stepping out of your beach-side cabin, onto a white sandy beach, on your way down to the glisteningly-still, turquoise sea? Well that will soon be an old-fashioned concept of something that only happened in the past. Most of the Pacific islands will disappear. Kiribati, Tuvalu, Micronesia, and Fiji will all disappear.

But the point is not that we will lose our favourite holiday destinations. As these islands become submerged, whole countries will lose their cultures and their homes. And it is not as if these countries are the main perpetrators of releasing green-house gases. These countries are mostly innocent, suffering at the hands of predominantly western hands.

As Antarctica melts, the consequences will be drastic for the animal kingdom.

There are many animal species in the world that are endangered, for various reasons. But as the seas change temperature, it is going to cause a lot of problems for animals that live in them. Whales and sharks already suffer from the effects of fishing, but the newly melted glaciers will make a lot of their waters uninhabitable for them.

There are a lot of animals that call Antarctica home.

While Antarctica might be inhospitable for humans, it is the home for a number of types of seals. As they return from their great ocean swims, they need somewhere to recover and to look after their young ones. Without this they are condemned to die out.

And where will these guys go?

Penguins are very prevalent in Antarctica and there are two species which come from there, including Emperor penguins. The largest colony of penguins that lives there has a population of 1.5 million penguins. Without the glaciers they will all struggle to survive.

It is not just the glaciers in Antarctica that are melting.

It is estimated that over a third of the glaciers across the Himalayas will have melted by 2100, even if we rapidly limit global warming. The Himalayas provide drinking water for millions of people in the surrounding countries. Once the glaciers have melted, the people will be doomed to a life of drought.

Then there is the Arctic to think about.

The Arctic is melting even faster than Antarctica. Experts think it may have melted completely by 2040. This will cause further consequences for the climbing sea-levels, and will probably impact Europe more too.

And again it will leave a species without a home.

We've all seen the pictures, but as the Arctic melts, polar bears are going to be left fighting for survival with an uncertain future. Their homes are melting and they will have nowhere left to live.

Is this the beginning of the end of the world?

Possibly, but probably not. However, it could well be signifying the end of the world as we know it. We cannot continue consuming as much as we do without consequences. This hole in the Antarctic is a perfect demonstration of what we are doing to the planet. We need to take action, and fast, but at the moment we still have time to save the world.