Hollywood Made Sean Spicer a Hero at the Emmys, but That's Just One Side of the Story | 22 Words 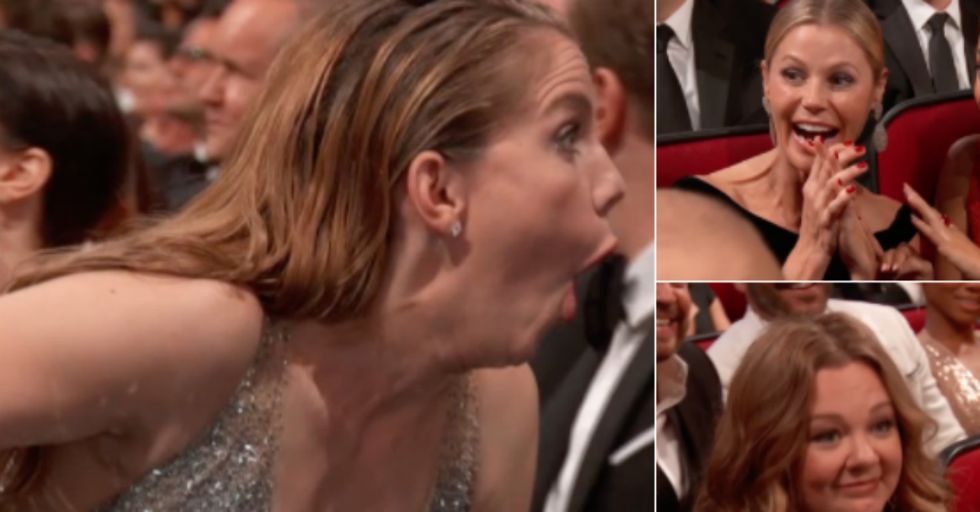 Hollywood Made Sean Spicer a Hero at the Emmys, but That's Just One Side of the Story

Awards shows are a species all their own, and while they're highly scripted, we can always count on good ol' live TV to provide some real moments of pure, raw emotion.

That's exactly what happened on Sunday, September 17 during the 69th Primetime Emmy Awards when a surprise guest rolled a podium out onto stage.

The shock on people's faces was genuine and uncomfortable. Woo live TV!

And it was a show to remember. The Handmaid's Tale and Big Little Lies won big, proving that shows featuring strong female characters are here to stay. It was also a historic night for people of color — many winners were Emmys record breakers.

Donald Glover took home the Emmy for comedy directing, the first time that award has been won by a black person.

Glover actually double-fisted gold statues, also winning Outstanding Lead Actor in a comedy series for his show, Atlanta, the first time that award has gone to a black man since Robert Guillaume won for Benson in 1985.

Sterling K. Brown became the first black actor to win for Outstanding Lead Actor in a Drama Series since Andre Braugher in 1998. That's a long time. Brown for his work on This Is Us, but he's no stranger to the Emmy stage. He won last year for Supporting Actor in a miniseries for his role as Christopher Darden in The People v. O. J. Simpson: American Crime Story.

Lena Waithe and Aziz Ansari took home gold for comedy writing, but it was Waithe who made history.

Their win for the Master of None episode, "Thanksgiving," makes Waithe the first black woman ever to win in this category. In her moving speech, Waithe called out her "LGBTQIA family" and said, "I see each and every one of you. The things that make us different, those are our superpowers." Way to go, Lena.

Last but not least, Julia Louis-Dreyfus continued her bonkers winning streak and broke several records along the way.

With her sixth straight win for Outstanding Actress in a Comedy Series, Louis-Dreyfus now holds the record for the most Emmys won for the same character in the same series, plus the record for the most consecutive wins. (She just beat out Candice Bergen, who has five Emmys for Murphy Brown.) Louis-Dreyfus is also now tied with Cloris Leachman for total Emmy acting wins (EIGHT!), and she's also the first woman to win comedy Emmys for three different roles (Elaine Benes on Seinfeld, Christine Campbell on The New Adventures of Old Christine, and Selina Meyer on Veep). And yet — this historic night captured people's attention for one other crazy reason...

No joke — It was Sean Spicer. Watch the appearance here:

Stephen Colbert's joke about the size of the crowd watching the Emmys couldn't have been complete without an actual appearance from the actual former White House Press Secretary for President Donald Trump, could it? It really begs this question: "Wwwwwhhhhhhhyyyyyyyyy?!"

Actors' reactions when Spicey rolled his podium out on stage were really something.

Anna Chlumsky from Veep looked like her jaw literally unhinged from her face. Melissa McCarthy — who, of course, does a spot-on impression of the man on SNL — looked incredibly embarrassed. Some, including Kevin Spacey and Tony Hale, laughed. Boy oh boy, were reactions mixed.

Most people were not on board with suddenly laughing off Spicer's role in willingly spreading Trump's lies around the world.

Putting Sean Spicer guy on stage at the Emmys or rubbing Trump's hair is what we call "normalizing evil." This Twitter user compared it to Ripley from Alien giving a thumbs up in a photo with a literal monster.

The night was going so well, too.

It proved to be a banner night for women and a long overdue recognition of people of color, and yet they had to go and ruin it by giving Sean Spicer — the guy who said that even Hitler didn't use gas chambers — the chance to "redeem his image" by making fun of himself.

The vast majority of Twitter reactions to Spicey's little appearance were wholly dismayed.

Not to mention the flash of Roger Ailes in the "In Memoriam" segment. The former CEO of Fox News died earlier this year, but not before he was disgraced and pushed out by more than 20 accusations of sexual harassment. Whoever planned the Emmys left a bad taste in the mouths of people everywhere with the tacit inclusion of these two destructive men. You'll never guess who else responded to Spicer's Emmys appearance...

Zach Braff had strong words about the guy.

It's undeniable that Spicer, in his short term as press secretary, willingly spouted lies at the behest of Donald Trump. The specific lie he tried to lampoon on the Emmys stage was about the crowd size at Trump's inauguration. Needless to say, people weren't having it.

It's especially egregious considering how much time people have been spending criticizing Hillary Clinton for being in the public eye.

The first female presidential nominee of a major party wrote a book about her experience, and she's getting chastised for doing a book tour. Meanwhile, the dude who perpetuated Trump's lies for six months gets a bit at an award show. Double standard, anyone?

It seems insane that people have to point this stuff out, but...

Melissa McCarthy's impression — while funny — is scathing, entirely critical, and unforgiving. This parading of Sean Spicer on the Emmys stage was just that — forgiving. It allowed the guy to go, "See? I'm in on the joke. I can't be insidious if I know I was terrible." But no one will forget what Sean Spicer did. And they won't forgive it, either.