'Home is The Most Dangerous Place For Women,' Says New UN Report | 22 Words 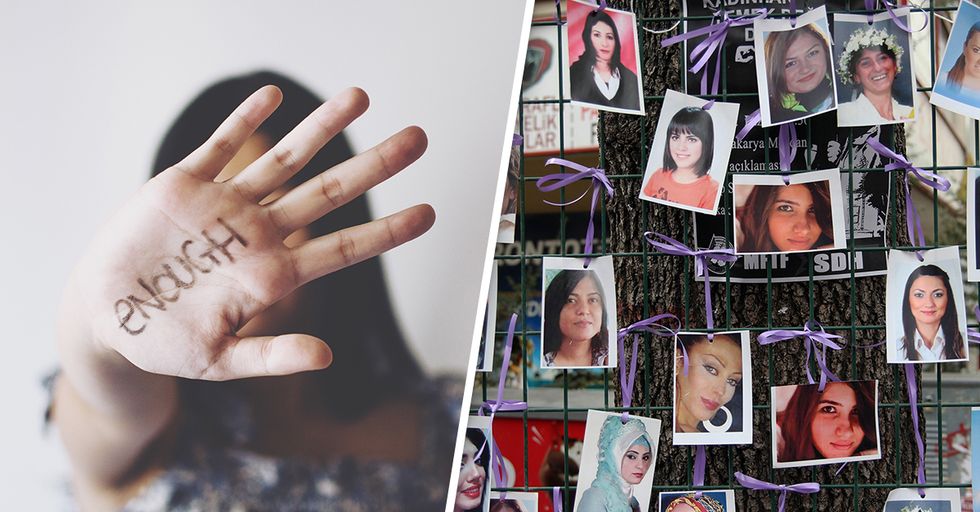 'Home is The Most Dangerous Place For Women,' Says New UN Report

Domestic violence is a problem that countries across the world are fighting. From verbal and emotional harassment to physical abuse, it’s a widespread problem. But what happens when it escalates to the extreme?

A new study from the United Nations Office on Drugs and Crime shows that fatal violence against women is far from uncommon in our world. It’s called femicide, which is the act of committing murder against a female relative or partner. What’s troubling is that the global numbers show that femicide is all too common within our societies across the globe.

While many people are quick to share suggestions on keeping women safe in the world, the UN report reveals that women are far more at risk for homicide inside their home than any other environment. While men make up the bulk of homicide victims, the UN reports that in 2017, 58% of women killed globally were reportedly killed by an intimate partner or family member.

Not only does the study show the high percentage of females killed by intimate partners and family members it also reveals that most of these homicidal acts were motivated by gender.

There is a clear problem that shows how much progress we still have to make as a society when it comes to gender equality.

If percentages aren't enough for you, the raw numbers are sure to shock.

It is detailed in the UN report, that 87,000 women were victims of homicide in 2017. Over 50,000 of those were killed by intimate partners or family members, with 30,000 or those victims specifically killed by a current or former intimate partner. It's not an exaggeration to say that relationships can be dangerous.

Where is the progress?

Although the findings of the study were bleak, the response has been powerful.

The study highlights what can be done to prevent femicide, including better services, including men in combating partner violence and changing cultural norms. Activists around the world have gotten involved. Keep reading to see what they're doing.

The organization that is sharing the study, UN Women, has also been campaigning to reduce violence against women. They remind us that too many women's voices have already been silenced, and it's time for us to speak up.

Activists are staging protests across the globe.

Activists are using powerful visuals to represent women who have been murdered. These shoes come from a protest in Mexico, where people protested the murder of over 600 women in the last four years. While many of us assume that this is a problem that lives far away from us, it can be surprisingly close to home.

Your location can make all the difference.

The highest rates of femicide are found in Africa, where 69% of all female homicide victims came at the hands of their intimate partners or family. What might surprise you is that the Americas are at the second highest risk, with 1.6 women per 100,000 dying of femicide.

Women are working to bring attention to the issue.

In many protests, art and social justice collide. The protest above was orchestrated by Spanish artist and activist, Jil Love, along with Mexican activist, Julia Klug. In Europe, the female intimate partner homicide rate is four times that for men, while in Latin America it's five times higher. These disparities point towards cultural and societal problems that must be addressed.

Why do men kill their female family members?

One of the great challenges in solving the problem of femicide is that the data can be scarce. It's hard to truly determine why this happens. While many people provide anecdotal evidence about jealousy, anger, honor, and power, most countries don't keep standardized data. But what we do know is that there are efforts to reduce the crime.

What is the solution?

At the UN, two recent resolutions have helped to spark interest in the issue and pushed member states to action. Some states have gone so far as to make "femicide" a specific crime, with harsher punishments. Many have also enacted policies that ensure children of these relationships are never under the custody of a perpetrator.

Other national movements have aimed at partner violence.

While some countries have focused on the criminal offenses of the perpetrators, others seek to focus on early intervention. The Bahamas created a campaign to educate young people on relationship abuse, while Moldova has been working to provide increased support to victims of domestic violence to help prevent femicide.

Domestic violence is not surprising.

What we know is that domestic violence often precedes homicide of a partner and that better support early can prevent it. This can be legislation that addresses domestic violence, sexual harassment, and marital rape, or access to services in the justice, health, and social services.

The study ends with a call for better data and better attention. Not enough countries currently keep accurate data on gender-related killings, and even within the UN, the issue has not received enough attention historically. Without the data, it's tough for countries to create policies that can save women's lives.

The UN is in the midst of a 16-day campaign.

Luckily for all of us, UN Women is in the middle of a 16-day campaign aimed at reducing violence towards women of all types, and they have tons of ideas for you to get involved. And we're going to tell you all about it.

What can you do?

The UN's latest movement, Orange the World: #HearMeToo, builds on grassroots campaigns from around the world. They describe it as "#HearMeToo brings to the forefront the voices of women and girls who have survived violence, who are defending women’s rights every day, who are taking action—many of them very far away from the limelight or media headlines. These are the faces we may not have seen in newspapers and stories we may not have heard on social media."

They're asking people to use the color orange to bring attention to violence against women. They've got social media templates, shareable graphics, and more for you to explore if you want to get involved. Or you can get creative with your own form of #orangeingtheworld.

Learn the facts so you can teach.

UN Women has an interactive site that will help teach you all about issues of violence against women, so you can share the facts with your networks. The more educated you are, the more powerful your words will be.

You too can join the international movement.

If you get involved, UN Women is asking you to share your photos and videos on Facebook and Twitter. You can host an event, highlight the voices of survivors, or meet with policymakers to encourage them to focus on femicide.

Men must be involved.

If you're not of the female persuasion, this is the time that you can truly support the women around you. Share their stories, make time to listen, and understand the unique risks that women face, even from those they trust the most. Read on to hear about some of the powerful stories women tell.

One of the most powerful ways that you can connect with the movement is to share your story. UN Women has a platform to share, or you can write it or tell it in your own way. As we understand the link between domestic abuse and femicide, we understand that it's important to talk about it before it becomes lethal.

Check out the words of others.

"I escaped violence. My memories did not," one survivor writes. Not every woman escapes, and their stories don't always get told. Some are as young as 18, killed for honor. Others are mothers, killed for leaving their partner. Many of these killings aren't even reported.

Many femicides take place after a woman leaves her intimate partner. And yet we so rarely hear this story. Few people understand how dangerous it can be for a woman to leave a relationship. These tweets highlight what it can mean.

Take control of the narrative.

Each time we tell the story of one of these women, we help to return their voices. We ensure that their lives are given attention. While the UN study highlights the sheer numbers and the scale of the problem, we can help by focusing on the personal elements that make these stories real.

One day can mean everything for some women.

If you want to be a part of the movement to end violence against women and to make home safe for women again, you can share these stories. You can share the staggering numbers: 47 women killed in one day.

What can you do? You can speak up! Share these statistics with your friends and family. Learn the signs of domestic abuse and talk to your friends. One voice can make all the difference.

Here are some more suggestions:

If you want to know all the ways you can support survivors, and ensure there will be no more victims, check out this guide. Hold a protest, make art, Tweet, use some hashtags! We have the power to create safety for women.

We all have the right to safety.

Whether you're speaking up for yourself, for your sister, for your mother, or for women everywhere, we need to make our voices louder. The numbers show that this is a real problem and that women's ability to feel safe in their homes is threatened.

We all have work to do.

No matter who you are, you can help to change society. We just have to remember that safety, dignity, and justice are the most important and that no one should have to be afraid of a partner or family member.

Take some words of wisdom from Malala.

We will conquer this problem. The odds might seem overwhelming, but nothing is more powerful than a movement whose time has come. Keep your eye on the horizon for more powerful words from women fighting femicide.