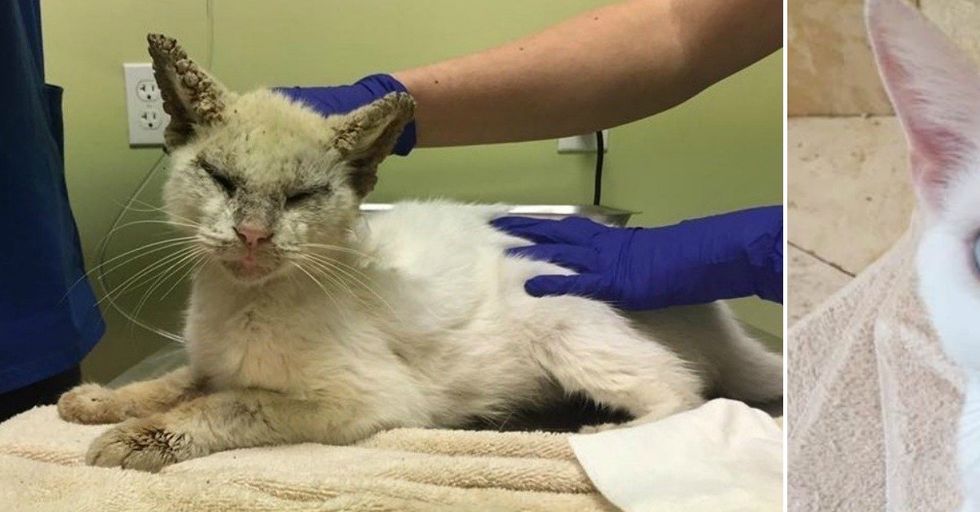 Joe from Royal Palm Beach, Florida noticed that a stray cat was eating from the bowl reserved for the family's feline.

Noticing just how hungry the cat was, he let him continue to eat. "He said Cotton [the name he was given] came out of nowhere and started eating from the bowl of food he had for his cat," said Carmen Weinberg, founder of Animal Friends Project. "He said Cotton seemed very hungry, like if he had not eaten in days."

Upon closer inspection, he noticed the kitty was suffering from mange on its ears and with its eyes completely shut and crusted.

The man rushed to his house to get a carrier and placed some food inside, and because he was so hungry, the cat walked right into the carrier.

Joe posted a plea in a local group on Facebook, but no one was able to help until Carmen came across the post through a friend — she just couldn't say no.

Having treated cats suffering from the same condition, she knew she had to help. "Early the next morning, I drove to pick him up. I took him immediately to my vet, Justin Bartlett Animal Hospital, and they confirmed that he was suffering from mange, was very dehydrated and malnourished," Weinberg said.

Cotton couldn't open his eyes due to the disease, and he had been walking outdoors completely blind for who knows how long.

"He purred the whole time they were examining him!" she said. "He received antibiotics, a dose of Revolution, and fluids and we went home. Fortunately, I had a spare bathroom where he could stay."

He was very skinny, but fortunately he ate well and was in good spirits, most likely sensing they were trying to help him.

"My husband Don, son Carlos and daughter Elisa, are used to dealing with cats with many illnesses and we knew that if we took some precautions, that we could still touch and love Cotton to help him heal," she said.

As Cotton was gaining weight and regaining his strength daily, the crust on his eyes finally came off.

"We put coconut oil to soothe his skin and gave him lots of water and canned food to keep him hydrated," she said. "It was hard seeing him in that condition, knowing only time would heal him."

As he gained weight, Cotton also began to grow hair, but that wasn't the biggest surprise.

"It was a nice surprise to see that he had one blue eye and one yellow eye!" Weinberg said.

"Cotton is very vocal and he would make noise to let us know that he wanted attention," she added. "He loves people and searches for attention. He wants to be where you are." This lucky boy is totally transformed and can't wait to find his forever home!