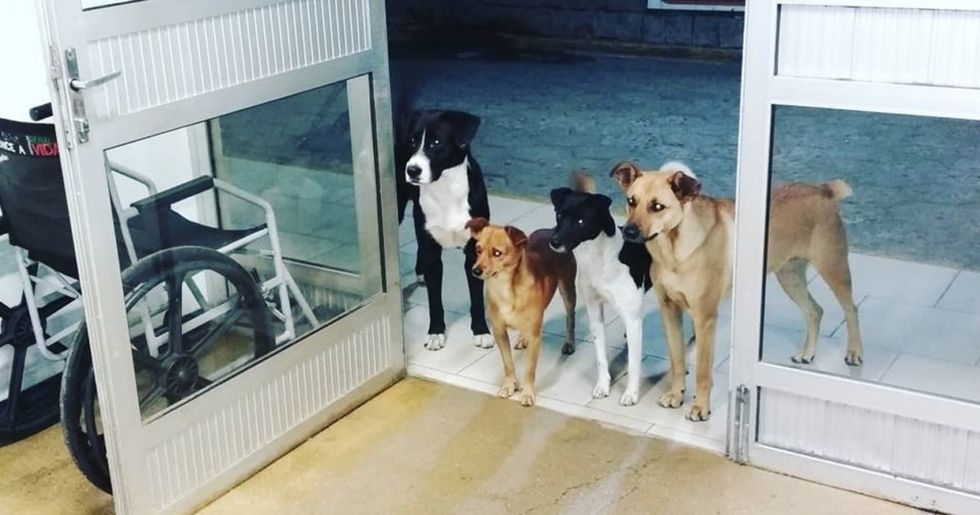 Some people say that a dog is a man’s best friends. As pets, they are loyal, caring and diligent – standing by their master’s side through thick and thin. And sometimes their loyalty can truly surprise you. For they are often willing to stay by your side no matter what, proving their love and admiration for the human being who cares for them so much.

This was recently the case at a hospital in Brazil, where a local homeless man was admitted. While there, medical staff noticed how the man’s loyal family of canines never left the premises, waiting in earnest for their beloved master. Taking the notion of man’s best friend to a completely new level.

In a hospital in Brazil

On Sunday, a nurse by the name of Cris Mamprim, was working the night shift at the Hospital Regional Alto Vale in Rio du Sul, Brazil.

When a stranger came seeking help

During the shift, a local homeless man named César came in seeking treatment.

The hospital came to his aid

Of course, the hospital admitted the man and began his treatment.

Although there has been no word on what he was being treated for, it seems to have been for a pre-existing condition.

Then something strange happened

While he was being treated, nurse Mamprim noticed that a small flock of dogs had congregated outside the hospital door.

They were well-fed for strays

Mamprim noticed how well fed the dogs were, especially when compared to other strays that he had seen around the area.

And there was a reason for this.

César admitted that the dogs were his closest friends and that any food he could obtain from the streets he would give to them, assuring their well-being.

Mamprim shared her thoughts about the event on Facebook.

On the social media platform she wrote,"A simple person, without luxury, who depends on help to overcome the hunger, the cold, the pain, the evils of the world, has by his side the best companions, and the exchange is reciprocal."

She couldn’t believe the amount of love the dogs were showing.

And the dogs did not leave his side

The dogs did not leave until César had been fully treated and was ready to go, again demonstrating how deeply they cared for the man who has shown them so much love.

And the staff assured that the dogs were fed

With César in hospital, the staff made sure that the dogs had something to eat, and even allowed them to come inside and have a meal with their beloved owner.

This just shows how loyal certain animals can be

It is stories like this one which show how loyal and devoted dogs and other animals can be to the people who show them decency and kindness.

César and his dogs are the perfect animal/human relationship

César and his dog’s devotion with each other just shows how powerful a relationship with a pet can be.

The bond between dog and man

And how that bond cannot be broken no matter what may happen.

César, you are a good man

I think we can all appreciation César and his admiration for his furry friends. And you will be glad to hear that he and his friends left the hospital fed and healthy. To continue their life and adventures together.