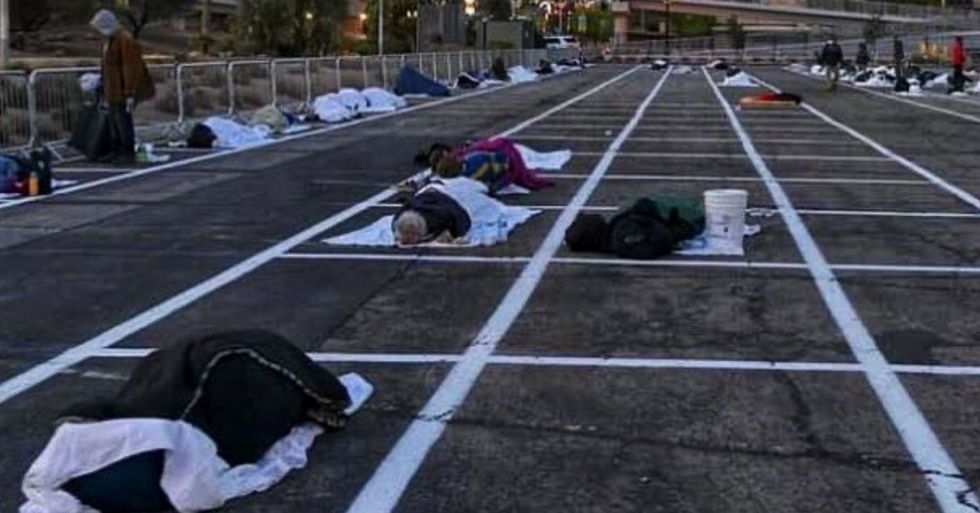 Las Vegas officials have been met with an outpour of anger after they decided to "shelter" over 100 homeless residents in a parking lot...

Keep scrolling for the full story, and to see the shocking photos of their pathetic excuse of homeless accommodation, right next to their empty hotels and casinos.

As most of you will be aware, we are the midst of a medical pandemic.

COVID-19 has been sweeping the planet at an alarming rate, and it is showing no signs of slowing down any time soon.

As a result of the deadly virus, people have been advised to avoid contact with others...

And many countries, including us here in the states, have imposed full lockdowns while instructing citizens to self-isolate at home.

But what about those who don't have homes?

While the majority of American's quarantine themselves within their houses, our thoughts can't help but stray to those who are homeless.

And our President is doing absolutely nothing about it.

Kind-hearted volunteers have been working tirelessly to find a solution for the homeless...

Across the country, make-shift shelters and hospitals have been erected in an attempt to properly care for our homeless citizens.

But, in Las Vegas, things have gotten completely out of hand.

Vegas' Catholic Charities Homeless Shetler has long served as the most reliable source of shelter and accommodation for the city's homeless. But, after a resident tested as positive for COVID-19 last week, they had to evacuate.

500 people have now been left with nowhere to stay.

Hundreds of residents were left to frantically find themselves new accommodation but, with other shelters already full, their efforts were to no avail.

But now, the Las Vegas City Hall has offered their solution.

The city has come forward and offered a parking lot to shelter their homeless residents... Despite the fact that many of their hotels and casinos remain empty and available.

This embarrassing excuse of a "shelter" is to remain open until the end of the week...

Which is when the Catholic Charities will reopen their doors, CNN reported.

Volunteers and students pitched in to try and make the shelter as comfortable as possible...

The make-shift accommodation is made up of 24,000 square feet with sleeping mats and lines painted on the floor to ensure they stay 6 feet apart.

The photos are simply shocking.

A parking lot should not be classed as accommodation. Period.

These people do not deserve this.

And, to make matters even worse, the carpet laid down by volunteers was removed, meaning that the shelter's residents are now forced to sleep on the concrete floor.

And many have slammed the city's governors as "disgusting" for their blatant carelessness over the situation.

These people have had their human rights stripped from them...

And one social media user even pointed out that animals are treated with more respect in animal shelters.

Let's get our citizens the accommodation and shelter they deserve. To read more about how the homeless have been coping throughout this pandemic, keep scrolling to hear about the volunteers giving out care packages to various homeless communities...