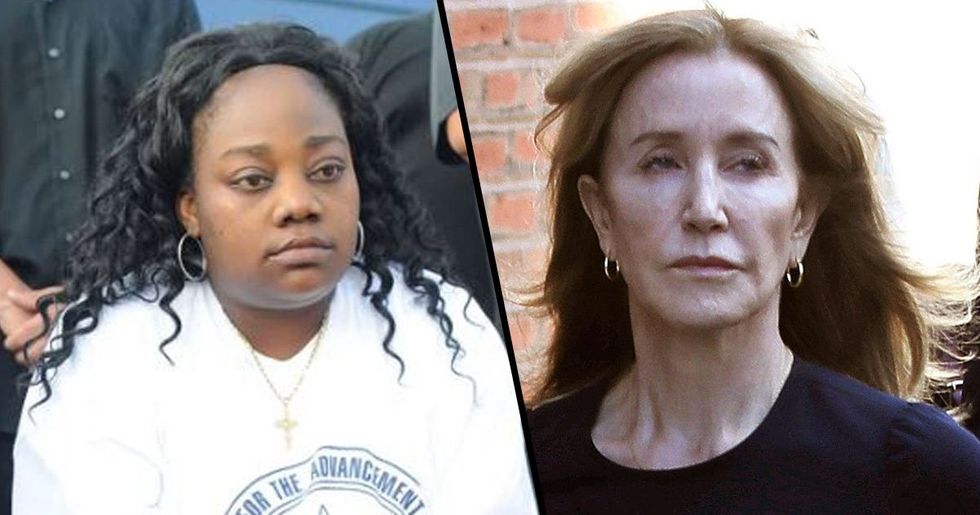 Our justice system is broken.

Need proof? A homeless black woman has just been handed a 5-year prison sentence for using her friend's address to enroll her 5-year-old son into school. 5 whole years behind bars, just for seeking a better education for her son.

And, just to add salt to the wound, this happened around the same time that actress Felicity Huffman was sentenced to a mere fourteen-days behind bars for bribing and tampering with college admissions in a bid to get her daughter a place at an elite institution.

If that isn't white privilege, I don't know what is.

Keep scrolling to read the full story, and to see just how damaged our system really is.

This story comes amidst a similar, yet more publicized scandal.

Actress, Felicity Huffman, has been in the center of a media storm after she was arrested on March 12, 2019, for her involvement with a nationwide college entrance exam cheating scandal.

In the early Spring of 2019, a number of high-profile celebrities were tangled in a vicious college admissions scandal.

And these parents eventually admitted to committing federal crimes in an attempt to get their children into high-profile and Ivy League schools.

A number of famous names have been dragged through the dirt amid the scandal.

Around fifty parents were attempting to get their children into high profile colleges including Georgetown, Stanford, Yale, USC, and UCLA. Hollywood actress Lori Loughlin was among the celebrity names involved in the scam.

And, after an intense investigation, it was found that the families had both cheated on entrance exams and falsified documents.

Huffman, being the most high-profile face amongst the disgraced parents, quickly became the face of the scandal.

And, after months in and out of court, the actress was subsequently charged with conspiracy to commit mail fraud and honest services mail fraud.

She also admitted to bribing an SAT proctor.

Without her daughter's knowledge, Huffman was found to have paid $15,000 for an SAT proctor to correct her daughter’s wrong answers, cheating the girl’s way into a better score.

The actress has now been sentenced.

On Friday last week, Huffman was sentenced to fourteen days in federal prison, 250 hours of community service, a year of supervised release and a $30,000 fine for her participation in the college admissions bribery scheme.

Huffman has expressed her remorse regarding her actions.

"There are no excuses or justifications for my actions. Period," she said in a statement after her sentencing. "I would like to apologize again to my daughter, my husband, my family and the educational community for my actions. "And I especially want to apologize to the students who work hard every day to get into college, and to their parents who make tremendous sacrifices supporting their children."

Quite a slack sentencing, don't you agree?

The actress was seen leaving the court hand-in-hand with her husband, William. H. Macy. Though the actor was named in the investigation, he didn't face any charges alongside his wife.

Many people are outraged over the slack sentencing.

And it has been used as an example of the underlying racism our justice system is experiencing.

Need more convincing that our justice system is corrupt?

Say no more. This week, a homeless mother from Connecticut has been handed a 5-year prison sentence... For using her friend's address to enroll her son into a school.

Tanya McDowell simply wanted a better education for her son.

The single mom has been living out of her van and a range of different homeless shelters with her 5-year-old son, Andrew.

She enrolled her son in a school district where he did not live...

And, in doing so, used her babysitter’s address to enroll him in a school in the neighboring town of Norwalk.

Her charges are completely barbaric.

The mother, who was thirty-four at the time of her sentencing, pleaded guilty to charges of first-degree larceny (a theft involving property or services valued at more than $20,000) and conspiracy to commit first-degree larceny for illegally enrolling her son in Norwalk public school despite not living there.

But Tanya has no regrets.

This should be proof enough that our justice system is broken.

And many can't help but point out the stark difference in the sentencing of Huffman - a rich, white woman - and McDowell - a homeless, black woman.

Huffman's status and wealth have clearly saved her from a lengthier sentence.

Some may call it "white privilege"...

Because her sentence is blatantly unjust in comparison to others.

And this isn't the first example of our racially biased justice system.

There have been thousands of cases of people of color been given harsher, and less fair sentences. The most recent is that of Texas woman, Crystal Mason, who faces 5 years in prison for casting a provisional ballot. Mason was convicted of illegal voting after casting a provisional ballot in 2016 while on supervised release for a federal felony but says she didn’t know she was ineligible to vote.

No matter what people say...

White privilege is a thing, and it's alive and well in our country. Take the example of a white cheerleader who was cleared of all charges after she buried her newborn baby in her backyard, despite the fact a black Alabama woman was charged with manslaughter when she miscarried during a shooting. Barbaric. Keep scrolling to read the full story...